Friday night, the Stingers faced the Queens University Gaels in their first non-conference game of the year. The match would become a battle between the divisions.

The Stingers took the game 64-56 against the Eastern division Gaels.

Forwards Olivier Simon and Schneiders Suffrard put the team on their back, as the pair delivered a set of double-doubles consisting of a combined 27 points and a towering 16 rebounds.

“We had two missing starters today. We were missing some big pieces and it’s my job as a veteran to fill those in,” says Olivier.

The pair knew that it had to not only win this match but also to compensate for the vacancy of their teammates, all-star senior Ricardo Monge and second-year Oge Nwogo. Both are players recognized for their major role on the team.

This was Suffrard’s first appearance of the season as he did not play during the NCAA exhibition games held early August.

By the time the first half ended, the Gaels were leading 31-27. They executed heavy pressure against the Stingers using their strong suit: their height.

“When you have pressure you want short passes, that’s what we discussed,” said Concordia Stingers men’s basketball head coach Rastko Popovic. “I thought their pressure got us rattled early on. The goal of pressure is to stress you out so we had to make small plays.”

Suffrard admitted that he and his teammates did not follow the scouting report as precisely as constructed during this match, but overall, he believes that the team played well.

A strong addition to the win was newcomer and Mississauga native, Tariq Hamad. Popovic played him several minutes during the second half and he did not fail to deliver, scoring seven points and one assist. It was Hamad’s first official game with the Stingers. 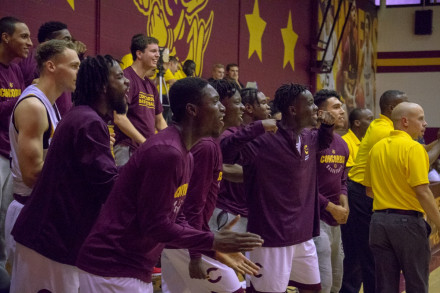 Both the Stingers and Gaels believe that non-conference games like this one are necessary to prep for the upcoming regular season. Photo Elisa Barbier

“This was my first university game. In the second half, I did what I did in practice. There’s a lot for me to work on but I have to be proud of myself and it’s gonna help motivate me to get better explained Hamad

“[Hamad’s recruitment] was a good pick up for us. For a first-year guy, for him to do that for us is impressive,” said coach Popovic about Hamad’s performance.

Queens’ senior Jaz Bains made a major impact, putting up 17 points, four turnovers and four rebounds for his squad. He was assisted by his teammate and guard Mat Elcock who grabbed 11 points and three rebounds.

Queens men’s basketball assistant coach Jermaine Small explained that the intent behind non-conference games is to allow his team to get used to different styles of play, for them to get ready for when they get to play during the nationals if they qualify.

“They [The Stingers] are also a little bit older than us and geographically, they’re close,” said Small.

The Stingers’ assistant coach Dwight Walton also added that non-conference games allow the Stingers and their younger players to groom themselves physically and mentally for regular season games.

It was a chance for each team to lay the groundwork for their upcoming seasons.

The match was also the first official game for new assistant coach Jay Prosper who is a former Stinger himself. Prosper played for the Stingers between 1995 and 1999. He joined the coaching staff in early September.

Next weekend, the Concordia Classic tournament takes place at the Loyola gym starting Friday, Oct. 5. Both the Stingers men’s and women’s basketball teams will have the chance to compete against several teams on a back to back three-day game schedule.