Concordia came out flying from the drop of the puck in their Sept. 22 preseason matchup against the Waterloo Warriors.

The game marked the last non-conference preseason matchup for the Stingers women’s hockey squad and the Stingers quickly established the rhythm with their high-end tempo.

“We wanted to get a lot of pucks on net and be able to get a good net front presence,” she said.

This style of play paid off early for Concordia as they managed to be the first on the board. The goal came off the stick of rookie forward Daniela Gendron, her first as a Stinger.

“It’s very exciting, especially because it was the first goal of the game. It got me pumped for the rest of the game,” said Gendron.

She was not the only rookie to score during the game as teammate Amélie Lemay got on the score sheet in the third period.

“It was not my first goal [of the camp]. I scored last weekend, but it’s always nice,” said Lemay. “Whether it’s your first or your tenth, they always feel good and important.”

Important indeed, as her goal turned out to be the difference maker.

Physicality was a major aspect of the game as players were shoving each other on many occasions between whistles, something that coach Chu pointed out.

“They’re a though team,” she said. “We knew it would be the case. Now, when you get to this level, all the games are fast and physical. Our team as to be ready to play those games.”

Fortunately for her, her players did not seem to mind. 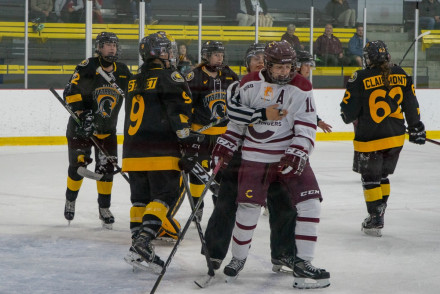 It was a very physical game for both sides that included some post whistle battles. Photo Elisa Barbier.

“It was tough, but I managed,” said Gendron. “I’m used to it. I’ve never had a problem with being physical, in fact I love it.”

The 3-2 score is not exactly an accurate representation of the game. The Stingers dominated for 40 minutes, but slowed down in the third. This allowed Waterloo to comeback into the game.

“I think the we took for granted the 3-1 lead and Waterloo pushed hard. We have to be a little more disciplined and intense in the third period so we can finish out games strong,” said Chu.

Concordia’s goaltender for the game, Alice Philbert, was very impressive in the win. Conceding only two goals, Philbert has nothing to be ashamed of as her team slowed down the pace in the third, leaving her on her own at moments.

Although they were awarded four power plays, Concordia never managed to capitalize on those opportunities.

Nothing worrisome to head coach Julie Chu, who said they were more focused on rolling lines in this game.

“We’re not really setting up a set power play unit. As we move into the next week, we’ll have a little more structure to it and practice those special teams,” she said.

The Stingers will take on the CWHL’s Les Canadiennes de Montreal this Sunday at 2:30 p.m. at Arena Michel-Normandin. It is sure to be a special game for both squads as some Canadiennes players are coaches on the Concordia staff.

“I think it’s going to be a nice experience. A little intimidating as well, as we are going to play against big names, but we’ll give it our all and hopefully surprise them,” said Lemay.