The pouring rain didn’t deter protesters this May Day. Around 600 marched through downtown Montreal in the name of anti-capitalism—starting at Phillips Square on Ste. Catherine’s St. W. and later going on to boulevard René-Lévesque W., Sherbrooke St. W., Ontario St. and St. Denis St.

They’re a group of anarchists and communists separate from traditional workers unions like the Confédération des syndicats nationaux, who also held their May Day protest at Jean-Brillant park in Côte-des-Neiges at the same time.

Several other contingents joined, including the Parti Communiste Révolutionnaire, CEGEP St. Laurent, McGill University, and the Industrial Workers of the World.

At Place Ville-Marie, one protester was arrested, according a media spokesperson for the Service de police de la ville de Montréal, Manuel Couture—in what they say was an armed assault on a police officer. The SPVM also reported graffiti on cars and storefronts.

As protesters continued down boulevard René-Lévesque, the Sûreté du Québec blocked National Bank and TD Bank near the Queen Elizabeth Hotel. Red flares were set off by the crowd, and soon placards and paint were thrown towards the banks. Police set off tear gas in reaction, and the group dispersed, only to regroup later on the north side of Place Ville-Marie. Soon after, a window of another TD bank was smashed on McGill College Ave. 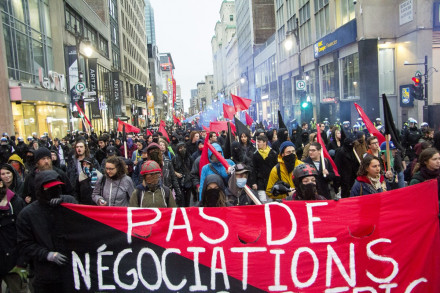 The crowd kept marching in circles around the downtown core and the Latin Quarter up until around 9 p.m., at which point they descended into the tunnel leading into the Place des Arts metro by the Université du Québec à Montréal. Mirrors and lights were smashed along the tunnel, and from there most of the crowd left on a metro going towards Honoré-Beaugrand.

Some protesters later met up at Square-Victoria metro, but little momentum was left, and the protest ended.

The CLAC took a strong stance against the festivities currently being organized by Montreal for its 375th anniversary.

“This year is the 375th of the founding of Montreal, and the 150th anniversary of Canada,” said organizer Paul Levesque at the rally. “We are also denouncing our colonial government who took this land from Indigenous populations 500 years ago. We’re fighting for their freedom, to preserve their land and to prevent the white government and big corporations from destroying everything in their path.”

Last year, the city set aside $329 million to fund the festivities. It fell under criticism last fall following a decision to invest $39.5 million into lighting up the Jacques-Cartier Bridge.

Community organizer with the Immigrant Workers Centre, Mostafa Henaway, said it tends to be immigrants who feel the disastrous effects of capitalism the most.

“They’re the ones who unfortunately en masse have had to flee disastrous neoliberal policies such as NAFTA, such as structural adjustment from the international monetary fund,” said Henaway. “On top of that they’re unfortunately the people from the global south who have paid the highest price of global capitalism’s and imperialism’s expansion.”

May Day is also known as the International Workers’ Day, and demonstrations happened all around the world. It marks a day of remembrance for the Chicago Haymarket Massacre on May 4 in 1886.

At the time, workers were calling for an eight-hour work day and the protest left four workers and seven police officers dead. To this day, it is marked as a time to remember the plight of workers’ unions.

“Today, us, the oppressed, the exploited, the workers, immigrants, people on welfare, minorities, Indigenous people across the country, LGBTQ, undocumented people, people living with a physical disability, single-parent families, people with mental disabilities, we are uniting to put an end to this system,” said Levesque.

The original iteration of this article reported 400 protesters present when the number was likely closer to 600. The Link regrets this error.