Addressing the Elephant in the Room: Racism in Hockey

A World Expressed Through the Lens of the Unwanted.

For Chase Harwell, life revolves around the game of hockey, a game he fell for at the age of seven. Raised in a small town in Connecticut, the freshman Stinger found his purpose playing hockey, but as he grew older, his identity accentuated a perpetual issue engraved in hockey culture: racism.

Harwell was one of four brothers who all played hockey at the local arena in Southbury, CT during their younger days. Not only were the Harwell brothers a unit on the ice, but they also practiced lacrosse, baseball, football, and basketball together. Before committing to Concordia, Harwell’s journey began with his uncle leading the way, guiding and exposing him to the world of hockey.

The young forward’s moment came at a local youth game in New Milford, CT where his talents were discovered by coach and former NHL player Yvon Corriveau. Impressed by what he had witnessed from the ten year old, Corriveau invited Harwell to his training camp in Cornwall, CT, a 45 minute commute from where Harwell lived at the time.

The now 21-year-old Harwell recollects his mother’s commitment to keeping his dream alive. It’s something he’s deeply grateful for to this day.

“My parents sacrificed a lot for me to practice everyday,” he said. “They put in a lot of time, a lot of money and invested a lot in me especially since we didn’t come from very much.”

After meriting a position on Corriveau’s roster, the Southbury native propelled his career convincingly and there was no looking back. Harwell pursued the dream—that is, the thrilling feel of hunting down the puck from end to end—at South Kent, a preparatory school in Connecticut widely recognized by top major junior leagues like the Quebec Major Junior Hockey League and the Ontario Hockey League.

Now playing for Concordia, he’s already made an impact on those around him. Stingers head coach Marc-André Élement has no problem speaking up about the new player.

“I’ve known Chase since he was a junior and he’s a real gentleman,” said Élement. “We were really happy we got him, there aren’t too many guys like Chase who can play any position. I think he will be one of our leaders really soon.”

Drafted at 16 years old by the Sherbrooke Phoenix in the QMJHL, Harwell began to fortify his climb up the hockey ladder as a teenager. After years in the game he loves, the Stinger reflects on an issue that has affected him in the past and continues to touch many other Black hockey players today.

“Being Black in hockey is just different, especially when you’re a kid,” explained Harwell. “Like in this world—a predominantly white environment, where there’s an unwritten rule as a Black player—[we] automatically say ‘what’s up’ to each other because [we] just know.”

A simple nod of the head as a sign of acknowledgment and solidarity between marginalized athletes transcends the beauty of the sport. It is a call for inclusion, a cry for humanity, and an attempt to rewrite a culture deeply entrenched in preserving its whiteness.

Nevertheless, distinct efforts from the NHL to change the face of hockey have opened many doors. With the “Hockey Is For Everyone” campaign, a little over 120 000 boys and girls from different ethnic backgrounds have been exposed to hockey within the last ten years.

Renowned diversity ambassador Willie O’Ree—who became the first Black person to ever play in the NHL on Jan. 18 1958—has largely contributed to bringing a sense of belonging and hope in Black hockey players around the league. A notable example is Philadelphia Flyers winger Wayne Simmonds.

In 2011, Scarborough native Simmonds fell victim to a world still intolerant and ignorant towards Black athletes playing hockey. A banana was thrown at him during a game in London, Ontario and just a year later in the Czech Republic, racial slurs were directed at him with some fans screaming “opice, opice,” meaning “monkey” in Czech.

Showing strength and character after facing such discrimination, Simmonds embraced Willie O’Ree for paving the way for future generations.

“Being Black in hockey is just different, especially when you’re a kid,” — Chase Harwell

“He deserves to be honoured as a legend of the game,” Simmonds said to the Players Tribune. “For every single kid who was ever told to ‘stick to basketball,’ Willie [O’Ree] was like the first man on the moon.”

Despite O’Ree playing only 45 games with the Boston Bruins, his historical impact on the game was celebrated earlier this year on June 28 when it was announced he would be inducted into the Hockey Hall of Fame class of 2018.

Harwell, like Simmonds and O’Ree before him, has plenty of stories of gut-wrenching injustices. In his early teens, Harwell had already been called the n-word an alarming number of times on the ice, but on one occasion, it was an adult in the stands who made it clear he was not welcome.

“I remember we were playing in Philadelphia. I was playing for the Hartford Junior Wolfpack. We had this huge rivalry with the Junior Philadelphia Flyers because we were both top teams in the nation and every year and we would always go at it,” recounted Harwell.

“I remember in the stands there was this one parent, he was just an asshole. Like he would always be screaming and one game, we were in the playoffs he yelled at the top of his lungs: ‘Hang ‘em up, you should play basketball.’”

The rough times on the ice made conversations with his father deeper and more recurrent. As a young boy, the racism proved to be overwhelming but Harwell refused to be walked on.

“My dad always had to talk to me,” he said. “He told me: ‘you’re gonna get this, you have to be prepared for it,’ since I was always getting into fights on the ice,” said Harwell. 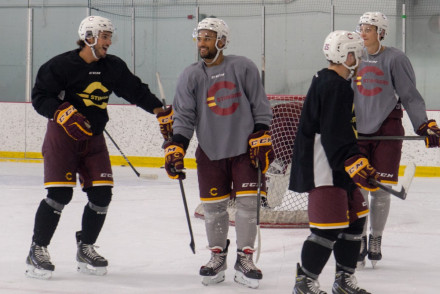 This overt racism towards Black hockey players and visible minorities is the real issue that needs to be addressed, said Bob Dawson. Dawson was the first Black athlete in 1967 to play in the Atlantic Intercollegiate Hockey League with Saint Mary’s University in Halifax.

“For me it’s fun to try to increase the number [of professional Black players] if that’s all the NHL and hockey organizations are concerned about that’s fine,” Dawson explained. “But I think they’re missing the bump; in order to sustain the momentum of more kids coming, they have to work on creating an inviting, more welcoming and accepting environment for [these] kids. They need to ensure and increase awareness about diversity.”

Born in Dartmouth, Nova Scotia, Dawson’s resume is highlighted by a groundbreaking part of history in Canadian university hockey.

Having experienced his fair share of racism in the 1970s, Dawson explained this wasn’t necessarily new to him but to some extent he expected and dealt with it accordingly.

“I would skate by the stands. Fans or supporters would throw racial slurs at me like coon, n-word, snowball, or even snowfall,” he said. “And of course during the course of the game, I heard the n-word from players, and there were a few players who got very physical with me. They would slash me behind the legs or slewfoot me.”

“For me, it’s disheartening that this is still going on,” said Dawson on recent racialized incidents in the NHL.

It’s difficult for him to see Washington Capitals forward Devante Smith-Pelly told to play basketball by spectators, or Nashville Predators star PK Subban being criticized by analysts for not playing the “white way” in a supposed slip up.

As a way to move forward, Dawson suggested that the training of parents, coaches, volunteers, and people of influence should start in the minor hockey leagues. He believes more substantial changes can occur as the children grow and more awareness to diversity can be fostered.

Correspondingly, Harwell’s trials and tribulations in his younger days exposed him to an ugly side of the game he loves.

Harwell’s former Sherbrooke and current Concordia teammate Carl Neill—a member of the U Sports all-rookie team who convinced Harwell to commit to Concordia—knows that Harwell never let the ignorance he faced take away his passion and joy for the game.

“I know for a fact in his younger days, he’d get a few weird comments and it’d bother him but he’s got thick skin,” said Neill. “Now he kinda just takes it with a grain of salt. It sucks that [it’s] still in the sport but he deals with it really well. It’s good to see, he’s an example for us.”

Ultimately, Harwell admits the race issue in hockey is past him but he knows the road ahead is still bumpy and work still needs to be done for future aspiring hockey players.

For the next generation, he wishes for an inclusive world, one that will allow kids growing up to enjoy the dream and most importantly one that will leave racism out of sports.

“I would want my kids to play hockey just because I know how I felt about hockey. I’m happy, I love playing hockey, but the messed up thing is the way things are going I have to mentally prepare my child to be discriminated against. I shouldn’t have to prepare my kids to be called an n-word for playing a sport they love.”