Arguably the most famous Canadian Rugby player and a recent inductee into the International Rugby Board Hall of Fame, Gareth Rees, graced the field at Loyola on Saturday, preaching the basics of a game on the rise.

Within Canada, rugby has traditionally been a niche sport loved and adored by few, but overshadowed by hockey. Yet Rees feels the game is growing, and the field full of rugby players at Loyola on Saturday was a testament to that.

“I just love how keen and advanced everyone is. They seem to know a lot,” said Rees of the 60 people that showed up for the $35 full-day clinic.

Rees, who holds the Canadian record for most test points in international play—487—started as a young player in Duncan, BC but moved to the rugby promised land in the United Kingdom. 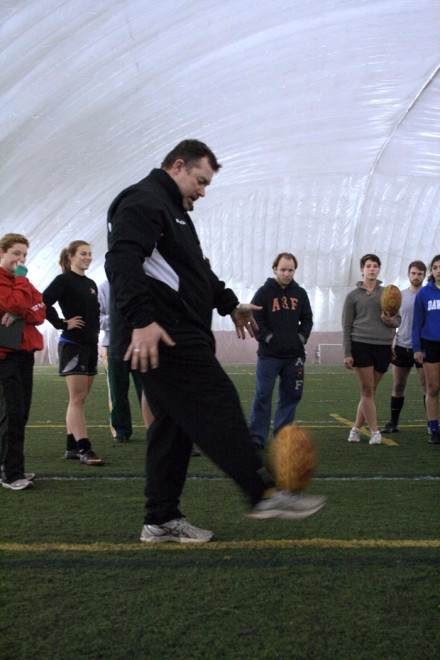 “My parents are from the UK and my father played,” said Rees. “My high school had a good rugby program. I played all sports but I liked the camaraderie and the culture of rugby best.

“I went over to Europe when I was young for a school exchange and had some success and was picked for Canada right after that,” he said.

Rugby has long been popular in the British Isles and Rees found success and adoration playing there. He also played for the 1991 Canadian Rugby team who managed to make it to the quarterfinals of the Rugby World Cup—the furthest a Canadian team has ever been.

His international reputation as a fly-half and kicker was good enough for his name to be chosen as one of 30 players elected to the Rugby Board Hall of Fame last year. He was the only Canadian in the bunch, and the only one inducted so far.

“Canada did some impressive things and were a team to be reckoned with. For me to be singled out meant that the whole squad was being recognized as well. Rugby is not an individual sport; you need your team to have success.”

“It’s a massive feather in our cap to know we have someone on the world stage, the equivalent of Gretzky in hockey—someone recognized as being one of the world’s best,” said Clive Gibson, head coach of Concordia’s men’s rugby team.
“Now that we’re competing on that massive stage that everybody in the world knows, we’re going to see the general public pay attention,” predicted Gibson. 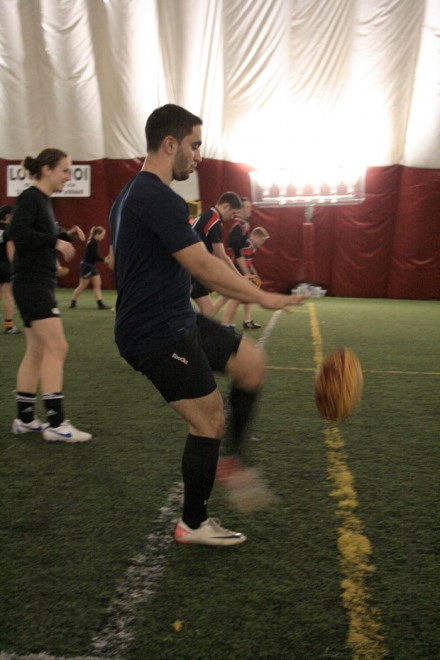 Currently, the Canadian women’s rugby team is ranked number one in the world, making them favourites at the upcoming London Olympic games, which has translated to funding and sponsorships.

The ranking is a proof of growing female interest in the sport, and a large portion of the players at the Loyola clinic were girls.

“Our women’s program based out in Victoria, BC gets a lot of funding and they get things we didn’t always have. They get all sorts of opportunities; they get gear and they get access to really good coaching,” said Rees.

“Rugby is not big right now but it’s growing really fast. When I started there were a lot fewer teams and now there are a lot more teams and places to play,” said one of the female attendees who plays for Campus Notre-Dame-de-Foy.

The students started off the clinic at Loyola with a video series about the differences between rugby union and rugby sevens—a variant played with seven players a side instead of the usual 15—before heading onto the pitch and performing some individual and line-out drills to help them understand the ways in which the pace of sevens differs from traditional rugby.

Introduced as one of the newest Olympic sports in 2009, the sport will make its debut at the 2016 Olympics in Rio de Janeiro.

Games last 14 minutes and, with fewer players on the field, rugby sevens is a much faster and freer-flowing game.

After a brief lunch, Rees began to focus on specialty kicking. All participants in the clinic watched avidly as Rees demonstrated the basics in kicking techniques before pairing up and perfecting it themselves.

This was followed by the students kicking high-arcing balls, some with placeholders and others in pairs. Rees moved throughout the action, emphasizing ways to improve the individuals’ distance and accuracy.

The students all seemed to recognize Rees as a legend, but his skills at rugby weren’t the only positive he brought to the field that day—he was also described as an “impressive” teacher, attesting to how much they learned about the game in just one day.

With rugby’s popularity heating up internationally and at home, it’s only a matter of time before Rees is seen for what he is—a Canadian rugby pioneer.