The Spirit of Fringe Returns With Triumph and Moxie

“Fringe always has room for you,” said Amy Blackmoore, executive and artistic director of the festival. “Fringe gives you space to say what you need to say.”

As the countdown to the twenty-ninth annual Montreal Fringe Festival kicked off in an array of cheers, Club Soda filled with an eager audience, hungry for a taste of this year’s program.

On May 27, the Fringe-For-All showcased two-minute teasers from performances included in this year’s schedule.

Ranging from dance shows to stand-up comedy, along with boisterous drag performances, Fringe-For-All excited the crowd and built hype for the weeks of shows to come.

Fringe-For-All showcased some exciting acts that tore through my expectations with lights, glimmer, glitter, and awe-inspiring talent. With over 60 performances to choose from this year’s program, it’s going to be a difficult task deciding which shows to attend. Here are some highlights:

Opening the night, the performers stumbled onto the stage in a fluster of moxie. This show breaks through the conventions of opera, adding a modern-day twist to the age-old art. The show feels just wild enough to satiate my desire to watch weird, musical theatre unravel on stage.

“This is a story about a fairy who can’t fly,” explained the host, before Meander, also known as Dot Dot Dot, pranced on stage in glitter and a very pink tutu. Over-enthusiastic and delightfully bashful, humour spilled from his dance routine as he flitted across the stage waving his pink ribbon wand with joy. His audience? Totally captivated.

PB & J (The Breakfast Club for a New Generation) 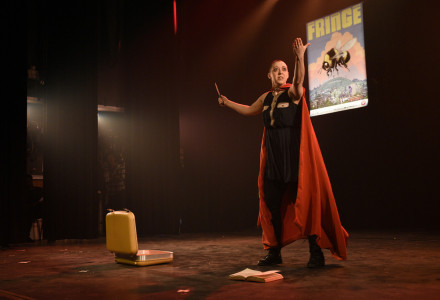 Natasha Perry-Fagant will perform a one-woman show at the Fringe. Courtesy Cindy Lopez

A modern-day retelling of The Breakfast Club, I felt instantly transported back to my high school days as two teenage boys pushed each other on stage. Funny and nostalgic, this show brings back memories with a sentimental vibe for an all-ages show that will discuss bullying, friendship, and good ol’ high school dramas.

Why Are You Afraid of Clowns?

Watch hilarity ensue as character Leer taunts the audience with scary props and his loud, booming voice. On stage, Leer swung an axe at his spectators as laughter—and, honestly, a little twinge of panic—bubbled throughout the venue.

For all those heteronormative coming-of-age movies, Exits is here to cater to a more inclusive audience. Exits is a queer coming-of-age story, featuring two women and a well-read copy of Moby Dick. On stage, two women fawn over the book, which is “the gayest story of all time,” said Kate Hammer, who plays Sam. Re-live your teenage years, except with more gay.

Want to truly break away from the traditional this year? Look no further. A chorus of animals sauntered on stage, meowing and pawing at the audience in a ferocious primal energy. This event will guide audience members throughout the city like a safari, weird and wonderful.

The Carrot: Sex, Shit, and Death

An immersive dream featuring floating, dancing carrots, this one’s for all the existential weirdos out there who are due for a dip into ridiculousness. 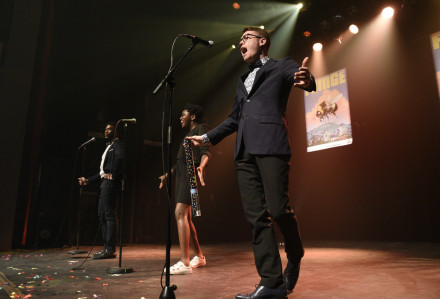 Love RuPaul? Well, House of Laureen is back at it again this year to blow your mind with a hilarious drag show featuring some of the city’s wildest drag artists. Bring on the glitter, you’re in for a treat!

“This festival really feels like it’s for the artist, for the audience, for the community,” said Murdoch Schon, founder of the short-works feminist festival Revolution They Wrote. “The community here is beautiful, and just absolutely amazing.”

Anyone can enter the festival, and the acts are chosen not by jury, but by lottery. The process “levels the playing field,” said Schon. This will be their second time working the festival.

The shows are also uncensored—artists are in full control of their art, Schon explained. Artists also receive all the box office funds directly, allowing the festival to contribute to artistic process in an accessible way.

The Montreal Fringe Fest runs between May 27 and June 16. Check out the website for a list of shows.