After three years with the Club de Soccer Mont-Royal Outremont Griffons, Frederico Moojen is moving on.

The Brazil native signed with Club de Soccer de Longueuil in October, and will remain in the Première ligue de soccer du Québec.

The club announced Moojen will be leaving on Thursday morning after Moojen sent out an email stating he won’t be back with the team next season.

According to Griffons’ head coach Luc Brutus, Moojen approached the club about a contract back in September. No reply was given, as they had already made plans to let go of their top scorer.

“We were waiting until the end of the season to part ways with him,” said Brutus. “We didn’t really discuss the contract because at that point we had already [made] our decision.”

Brutus said that the club wanted to bring a different chemistry to the team ahead of next season. Not because of the problems on the field, he said, but because the team wanted to change the group’s dynamic. 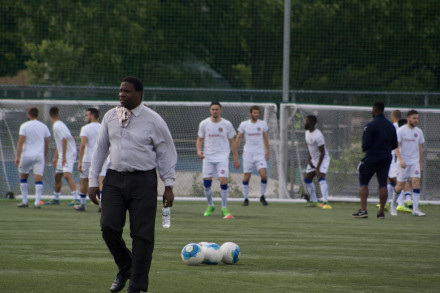 Contrary to the club’s decision, Moojen said the decision to leave the club was his own. “Nobody knew I was leaving other than Longueuil,” he said.

“They can say they don’t want to renew me, no problem. But who is going to be the judge to know if it’s true or not,” said Moojen. “I can tell you this, how is a club going let go of the best goalscorer the [team] had for the past three years? I’m the guy with the most goals in Quebec since 2011.”

“On the field it was not the best situation for a professional player like me,” said Moojen. “I made the change myself. Instead of waiting to see new changes next year.”

Moojen waited until the end of the season to make his decision, he said. His contract ends as soon as he leaves for his indoor season back in Florida, where he plays for Florida Tropics Soccer Club of the Major Arena Soccer League—a North American professional indoor league.

Once Moojen left, he said he began to look at his options, and Longueuil was one of them.

“[After] I left I spoke to [Longueuil] and we came to terms,” he said.

Having been in touch with Longueuil head coach Anthony Rimasson, Moojen was attracted by the club’s vision moving forward on to next season, as well as their playing style.

“I believe the coach that they have is qualified, they have high expectations […],” said Moojen. “I played against Longueuil many times, I find that they’re very organized and they’re a very good team at the end of the day.”

Moojen added that Longueuil are missing a few pieces to the puzzle, and he hopes to be “one of those pieces and help them win the league next year.”

Despite switching team, Moojen expressed that he was thankful for the three years he spent with CSMRO. He added that “the club is very organized and they try to do everything professionally.”