What Far-Right Groups are Active in Quebec?

There are many different, sometimes conflicting far-right groups in Quebec. Here are a few of the more noteworthy ones.

The Soldiers of Odin, named after the Norse god of war, started in Finland in 2015. Canadian branches began to pop up in 2016, though the Finnish branding of SOO was eventually considered “too racist” by its Canadian branches. Quebec separated itself from SOO Canada to become SOO Quebec in order to keep its ties with Finland.

The Quebec branch of SOO was led by Dave Tregget until Dec. 9, 2016 when he was replaced by his second in command, Katy Latulippe. The reasons for Tregget’s departure were unclear. Some say he was kicked out, but Tregget says he quit because of the racist image of Finland. He went on to form Storm Alliance.

Tregget claimed that he aims to unite all of the far-right groups to work together and “protect Canadian values.”
Under Latulippe, SOO Quebec is trying to return to their Finnish roots. According to CBC, they claimed to have about 400 followers at the end of 2016.

The SOO made a brief appearance at the Nov. 25, 2017 protest in Quebec City, along with Atalante, La Meute, and Storm Alliance and were brandishing racist banners.

On March 25, 2017 the SOO attempted to disrupt a workshop series on organizing against the rise of xenophobia in Canada and the US held in Concordia’s Hall Building, hosted by the Resist Trump & the Far-Right Network of Montreal. SOO protested under heavy police protection. However, some members were hurt or thrown out of the workshops by students. By the end of 2017, the group began patrolling the streets again—something they had only done a few times under Tregget.

In Montreal, David Leblanc, Philippe Gendron, and ‘Sue Elle’ made a name for themselves when they tried to organize a protest against Haitian refugees who were being temporarily housed in the Olympic Stadium in Montreal. Their protest was cancelled due to a strong anti-racist mobilization.

The SOO claim to protect Canadians from the “Muslim threat” and have been known to work with the neo-nazi group Atalante Quebec.

Members of SOO privately cheered after the Quebec mosque shooting. Latulippe posted in SOO’s closed Facebook group, writing that “of course, as an individual, it’s possible to see this as a predictable consequence. They’re getting what they deserve!!! But this is a war in which innocent people will be harmed.”

After Tregget left the Soldiers of Odin, he founded Storm Alliance in December 2016, with the aim of making the far-right “more respectable,” often claiming that their group isn’t racist despite staging protests against migrants and Muslims.

While SA often works with La Meute, the two groups have had conflicts in the past. For example, at the Aug. 20, 2017 anti-immigrant rally in Quebec City, La Meute refused to let members of Storm Alliance into the parking lot where they were meeting. As a result, Storm Alliance was unable to participate.

In May 2017, the group began patrolling the US border crossing at Roxham Rd., where the majority of irregular crossings have occurred by refugee claimants coming from the US. The group claimed to want to send a message to Trudeau and see what happened at the border for themselves, as they felt that the media and officials were lying to them. They didn’t see anyone crossing the border that day.

One of Storm Alliance’s most notable protests was at the St. Bernard-de-Lacolle border on Sept. 30, 2017 where about 200 of their members came to stand against Trudeau and Couillard’s Liberal government.

About 250 members of Storm Alliance also joined La Meute on Nov. 25, 2017 in Quebec City to denounce the Liberal government’s Forum Validating Diversity and the Fight Against Discrimination, which was originally meant to focus on systemic racism. Its focus shifted to how Quebec can improve job opportunities for minorities and immigrants and reduce discrimination against them in workplaces.

Storm Alliance marched separately from La Meute, claiming that they do not agree with La Meute’s Islamaphobic platform.

In January 2018, Tregget stepped down as president due to sexual harassment allegations. The privacy settings on the Storm Alliance and Tregget’s Facebook pages were then changed to private.

Storm Alliance’s platform remains unclear. According to their Facebook page, they aim to “protect and save the Canadian values that have helped shape Canada into the wonderful country it is today,” and to follow a “no one left behind” motto. They claim to accomplish this through “charitable work, vigilant citizens, and activism in Canadian communities,” but do not provide any examples of such work.

In a previous interview with The Link, Dave Tregget said that their main goal is to get rid of the establishment, more specifically the Liberal government. He also claims that the group isn’t anti-immigration.

Storm Alliance has described themselves as ultranationalist to the CBC, but still claims to not be racist.

La Meute was founded in 2015 by two ex-soldiers, Eric “Corvus” Venne and Patrick Beaudry. It is the largest far-right group in Quebec today.

La Meute is guided by Islamophobic sentiment which has even made Storm Alliance call them out for their racism despite the two groups’ occasional collaboration.

La Meute participated in the Nov. 25 protest, but focused on Muslim women who wear the burqa and niqab. The protest took place shortly after Bill 62 was passed which prohibited face coverings while receiving public services.

Since Nov. 25, La Meute has mostly been active online, though they had planned a demonstration in front of a mosque that TVA falsely claimed wouldn’t allow women on a nearby construction site. The demonstration was later canceled. A few members still showed up and were met by anti-fascist counter protesters.

Though their private Facebook group says they have around 2,500 people who have been active, many are added to the group unwittingly and the numbers do not accurately represent how many members the group really has. The amount of people who are actually active in the group has gone from 389 in December to 204 in January and then to 134 in February, according to OnJase.org, a website which serves as a platform to discuss the rise of the far-right from a critical perspective. However, the number of members is hard to gauge through the Facebook group alone.

La Meute was originally formed as a non-profit organization. Quebec law requires that organizations host an annual general meeting in order to elect a board of directors. La Meute never held one, but four people were appointed as interim temporary board members: Venne, Beaudry, Stephane Roche, and Eric Proulx.

In January 2017, Venne was pushed out of La Meute after being accused of stealing thousands of dollars from the organization, which he never denied but rather claimed was meant to be reimbursement for money he spent on the organization.

Proulx and Roche worked together to secretly set up a for-profit company, and then proceeded to seize control of the La Meute communications infrastructure, which consisted of their website and Facebook group. Following this, Beaudry was effectively kicked out of the organization.

In December 2017, Eric Proulx had to leave La Meute’s council due to allegations of sexual misconduct.

Anti-fascist social media pages such as LeTroupeauQC have played a role in exposing the work of La Meute and has effectively made them lose credibility.

La Meute worked with Soldiers of Odin until early 2017. The group refuses to call itself racist or admit to being part of the far-right, claiming instead to oppose “radical Islam.” 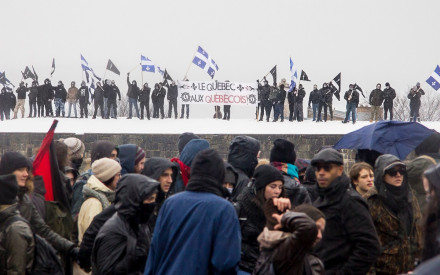 Atalante is a neo-nazi group formed in August 2016 by people who followed Legitime Violence, a hardcore “ultranationalist” hate-rock band inspired by the skinhead movement in Quebec. Their slogan is “to exist is to fight against what oppresses me.”

The group believes in street action and an identity renaissance. They believe in a white nation, claiming that multiculturalism is killing their identity and that they are suffering under the “tyranny of the politically correct.”

Atalante is inspired by the Italian anti-immigration far-right group, CasaPound and the Bloc Identitaire in France.

Atalante claims to be anti-capitalist and to oppose the “international bourgeoisie.” The group claims that these groups—which serve as coded language to describe Jewish people—are leading a war against the white working class in order to replace them with immigrant workers and taking jobs away from Quebecers.

Atalante’s beliefs are closer to the Fédération des Québécois de souche than those of La Meute. They distribute the FQS newsletter, the Harfang.

Atalante is highly Islamophobic, equating Islam to terrorism and believing that Muslims are financed by “globalists,” which, again, is coded language to mean Jewish people.

Members of Atalante have previously been tied to hate crimes, including the stabbings of visible minorities. The group holds combat workshops to train their members for their street actions and patrolling. They also regularly feed white Québécois homeless people, refusing to serve homeless people of colour.

Atalante also made a brief appearance on Nov.25, marching along Storm Alliance, La Meute, SOO, and the police.

They were also behind a series of banner drops which treated white leftists as “traitors” and activists of colour such as Jaggi Singh as “parasites.”

The FQS is one of the most prominent far-right groups formed before 2014, having launched their website in 2007. It was founded by Maxime Fiset, who has since been de-radicalized and is now a consultant for Montreal’s Centre for the Prevention of Radicalization Leading to Violence which also denounces anti-fascist groups.

The FQS organizes around neo-nazi “blood and soil” mythology. It is composed of white nationalists who believe that Quebecers are losing their land due to immigrants. On their website they say that “multiculturalism is cutting our roots and homogenizing us and we must resist.”

The group claims to be tired of corrupt politicians who are “selling the country,” refusing to take part in elections where the parties change but not the ideas. According to them, the answer isn’t in parliament but in the people. On their website they write that “the Nation isn’t a vague concept, it’s in our blood.”

The FQS started as an attempt to unite disparate right-wing extremist groups in Quebec, especially those from the hate-rock skinhead subculture. Fiset told the Montreal Gazette that the FQS “reject[s] others, so it is violent, and there were always these talks about armed revolution. They will never admit it, but everyone had books about how to make bombs, and they were planning a training camp North of Quebec City, wanting to get in shape ‘in case of the revolution’ with a paintball team, boxing classes and ju-jitsu. They got into fights with [anti-racist groups] and they’d come back bleeding but happy—they got kicked but they kicked more.”

According to the anti-fascist run website Montreal Antifasciste Info, the FQS only has about 60 members today.

The FQS’s beliefs are rooted in the idea that white Quebecers must protect their culture and identity as before anything else. It references the Ku Klux Klan on its website.