After closing out 2019 with a win against the Université du Québec à Montréal Citadins, the Stingers fell short on their return to the Centre sportif in the first game back from the break.

“I would rather a win,” Stingers guard Nelly Owusu said with a smile about her first game back from injury. “But it felt great.”

The Dawson College alum sat out most of her rookie year after sustaining an ACL tear. She worked her way back to fitness to start the 2019-20 season only to injure her shoulder before the start of Réseau du sport étudiant du Québec play at a pre-season tournament in Regina.

Cheers and clapping from the Concordia bench followed as Owusu walked onto the court for the first time in league play as a Stinger.

Owusu opened the scoring and put Concordia up 2-0 at the 7:43 mark. The sophomore caught the ball at the three-point line and drove into the lane with a defender on her hip to convert the layup over her marker.

She finished with a team high 12 points and showcased her quick first step throughout the game. Using her speed to pressure UQAM’s interior defense, she picked up eight free throw attempts.

“Off the dribble, she’s a hard guard. She’s hard to keep up with. Right now, she’s not 100 per cent, but the per cent she is is enough to do some stuff for us on the offensive end of the floor,” said Head Coach Tenicha Gittens.

But it is on the defensive end where the Stingers believe the guard can have the biggest impact.

“Defensively she’s still trying to find her wind back and get rid of some of the jitters, but for us she’s going to be our leader on the defensive end,” said Gittens.

She has active hands, quick feet, and the anticipation to know just when to poke a hand in or slide over.

UQAM held a 15-13 lead over Concordia at the end of the first quarter. The Stingers kept the score close by switching all screens on defence despite sputtering on offence.

Owusu’s return allows the Stingers to do this without giving up a lot of size and giving their opponents size and speed mismatches to exploit. 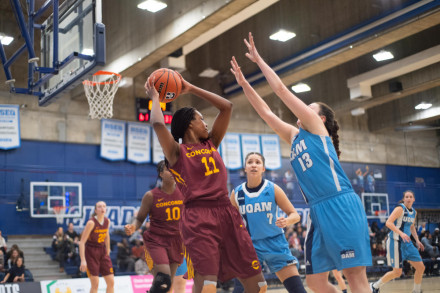 Concordia’s Shanice Neita looks for teammates while being double teamed by UQAM defenders.

“It helps when you have longer, bigger guards. Myriam [Leclerc] is 5’10. [Owusu] is 5’10. It allows us to kind of play with what we want to do defensively, so that is something that we’re able to do,” said Gittens.

Owusu’s ability and willingness to competently guard any position on the court unlocks different defensive looks for the team.

“I’m pretty comfortable because I’m a pretty tall player as well. Before, I would play the four just because my coaches before didn’t know what position I would play. Because I’m tall, I’m guard,” said Owusu.

This is a strategy the Stingers hope to build on.

The second quarter finished 35-24 for UQAM thanks to fourth-year wing Véronique Boivin’s 10 points. Boivin finished the game with a double-double, scoring 14 points and grabbing 10 rebounds.

UQAM pulled away to a 50-33 lead at the end of the third quarter. Three UQAM players put up double digits in scoring compared to just one for Concordia at the half.

Fourth-year UQAM guard, Clara Blachier, led all scorers with 17 at the end of the game.

Stingers guard Areej Burgonio stepped awkwardly while bringing the ball up on the last possession of the quarter. The second-year player had to be carried off the court and did not re-enter the game. This is a huge blow for the Stingers, as they have dealt with a lot of injuries this season.

Third-year Stingers guard Sabrina Lineus subbed in for Burgunio made two three-pointers in the fourth quarter, and Owusu made a pair of free throws. But it was too little too late for the Stingers, who bowed out 65-47.

While the final score left much to be desired, Owusu is glad to be back on the floor.

“It’s really tough mentally. It has been like a mental battle. What people don’t see is the mental battle that injured people have to go through, […] but I’m happy I was able to get over it,” said Owusu.

Concordia hosts UQAM this Saturday at 2 p.m. in their final meeting of the regular season, and maybe this time around, Owusu will get that win.