District 3 Is a Startup Incubator Hidden on Campus

District 3, Hidden in the Faubourg Building, Has Advanced 386 Businesses So Far

District 3 advertisements can be seen all around campus, but what is District 3 really?

This on-campus incubator was created in 2013 for aspiring entrepreneurs. Since then its been a home for students and non-students who want to gain skills so they can establish their own companies. Some companies that have sought the help of District 3 are involved in artificial intelligence, sustainability and health.

Both students and non-students are able to seek help from District 3, through advice on how to navigate through the business world or opportunities to meet with investors. Concordia students are also able to use their entrepreneurships for class credit.

This is done by offering members strategies and resources to avoid the common pitfalls many startups face, explained El Bawab. These resources include mentorship opportunities, employees, and funding to the startups.

Rather than just looking at long-term investments into startups, District 3 offers both startup incubator and accelerator programs.

“From idea to impact,” is the motto of District 3 El Bawab said.

According to El Bawab, District 3 is a valuable player as a service available at Concordia, with their 386 startups which are either being mentored presently or who have graduated from the incubator and acceleratored independent endeavours.

Blockchain, an online ledger for decentralized online currencies, and artificial intelligence are vital players in the startup industry, but there are other essential companies in District 3’s portfolio as well.

District 3 is looking to work with companies which provide a solution to a problem that has not yet been solved. 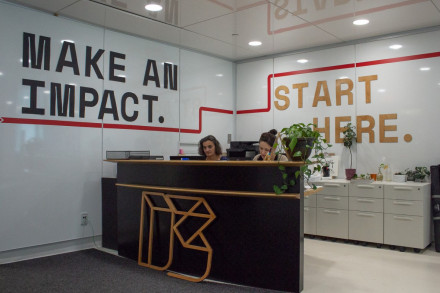 District 3 is located on the sixth floor of Concordia’s Faubourg building.

One example of an early graduate from District 3’s incubator program is Revol’s, a custom headphone company which managed to raise over $2.5 million in their 60-day campaign on the crowdfunding platform Kickstarter.

The true definition of what startup incubators and accelerators are is “unclear even in the industry,” said El Bawab. The general idea is that an accelerator is a short program with a clear beginning and end, while an incubator is more of a long-term investment that can last up to three years.

“Instead of going around and asking your friends and family whether an idea is a good one, we force people to go and ask their customers over a period of three months and by customers I also mean [suppliers and partners],” El Bawab said.

As for where the company’s money comes from, District 3 received funding from multiple sources to support the many startups it houses.

“Some of the funds come from Concordia, some are from philanthropists, we got $1 million from the Desmarais family a few years ago, and other parts are coming from the [Ministère de l’Économie, de la Science et de l’Innovation]. So there are multiple chains that finance our operations,” said El Bawab.

“They are here to help you, but if you are not willing to take the extra mile, they won’t do it for you.” —Antoine Riachi

“We need to figure out what success means to the entrepreneur,” said El Bawab, as success does not have to mean $2.5 million in crowdfunding revenue.

Recently, Greater Montreal has been named a hub for tech startups, specifically in the artificial intelligence industry, El Bawab said.

If a company is to start in Montreal rather than in New York, your money can go approximately twice as far, said El Bawab. However, the trend of companies moving to Montreal has been a very new one.

El Bawab shared that she began noticing the trend in 2017. But even she admitted no one knows the exact reason for the increased interest in Montreal as a hub for startups and tech companies.

Antoine Riachi approached District 3 last year with his partner to get help starting their AI company.

His company, Tesseract, is working on their product called Gooroo.ai, which uses psychometrics that measure knowledge, attitude, personality traits and abilities in order to provide a suggestion of majors for students to study.

Riachi said that he and his partner suffered from switching programs various times due to not knowing what major they wanted to graduate from.

He said District 3 helped train them in designing a pitch, and how to close a pitch—which he said is the most important part of the process.

“They are here to help you, but if you are not willing to take the extra mile, they won’t do it for you.” He said that’s what he loves about District 3, that it’s really about the effort of the entrepreneur.

“They are not here to build the company on your behalf,” he said, adding that they are there to provide support in helping the entrepreneur reach their goals.

“There’s no catch,” he said, referring to District 3 not taking profits from the entrepreneur’s company.

El Bawab said the reason companies like District 3 are essential to Concordia and Canada is due to the social and economic opportunities they create.

“If there aren’t people generating and creating jobs then you have the 40,000 students that graduate from Concordia, or any other university for that matter, without jobs,” said El Bawab. “The more we create these kinds of companies, the more we are creating opportunities for Montrealers, Quebecers, and the world as a whole.” 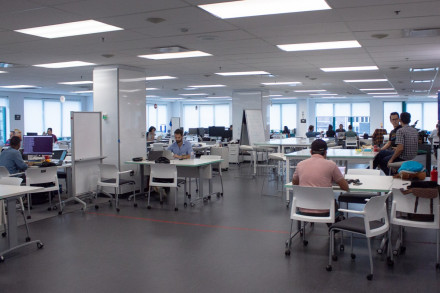 386 Businesses have been helped by District 3 so far.

For students who are interested in getting involved with District 3, there is a residency and certificate program, and a three-month program where the startups pay students to work for them.

“It is kind of like an internship, but it is more intense in the sense that the startup gives a project to the students and the students have to deliver on something,” El Bawab said.

This provides hands-on entrepreneurial experience for the students while benefiting the startups with employees from a range of backgrounds and faculties.

“The results are pretty mind-blowing. Not necessarily just in terms of delivery and the project, but in terms of the transformation of the people themselves,” El Bawab said.

For students who don’t want to pay or receive credits, they can pitch their idea to District 3 by posting a video online, and from there District 3 can invite you to pitch for them in person.

Some projects that arose from Summer 2018’s 12-week residency program include Second Life, a company which focuses on delivering misshapen food which would have otherwise been discarded.

Aifred Health, another project from the summer, is a deep-learning clinical tool which is being developed to personalize mental health treatment. Through AI, Aifred is developing a way to improve applications for mental health care providers and their patients.

Certificate program participant Sathsala Perera shared that her work with Aifred Health, as well as with a number of other startups, allowed for her to work with many other interdisciplinary students over the eight months she spent with District 3.

Perera said she signed a non-disclosure agreement, so she cannot speak about the company or the tasks she completed, however, she found her experience at District 3 to be beneficial.

“[District 3] gave me the space to look at things from a broader perspective,” said Perera. “I think it shaped the way I communicate with people from different backgrounds.”

District 3 is open from 9 a.m. to 5 p.m. on Monday to Friday on the sixth floor of Concordia’s Faubourg building.

With files from Savanna Craig