Art Gets the Axe

Canadian Conference of the Arts Shuts Down After Losing Funding

Stock up on paintbrushes, artists—the way things are going in this country, art supplies might be hard to come by before long.

The Canadian Conference of the Arts, a forum where policies relating to the Canadian Arts, Heritage and Cultural sector are discussed and debated in order to shape the country’s cultural landscape, has just been served a serious blow by the Conservative government.

Until last April, the CCA had received 70 per cent of its operating budget courtesy of the Arts, Culture, and Diversity Program—but on Tuesday, the CCA offially threw in the towel, after the program was terminated by Prime Minister Stephen Harper’s administration in the name of balancing the budget by 2015.

After 47 years of relying on federal funding, the conference was suddenly tasked with the challenge of becoming financially autonomous. The CCA had no choice to come up with an entirely new business plan—or be forced to shut its doors.

The conference may have been able to raise money, but it couldn’t race time. The blow meant that the CCA would only have six months to completely switch its model—but it needed two years.

The idea of jeopardizing all of the funds it had collected from public and private supporters would be risky, if not downright irresponsible, so on Nov. 2, the CCA announced it would start shutting down—at least for now.

When the CCA was founded in 1945, its founders were making groundbreaking steps towards solidifying the status of artists in Canadian society.

But while society has evolved in the past 67 years, through the arts and otherwise, the CCA has failed to keep up. 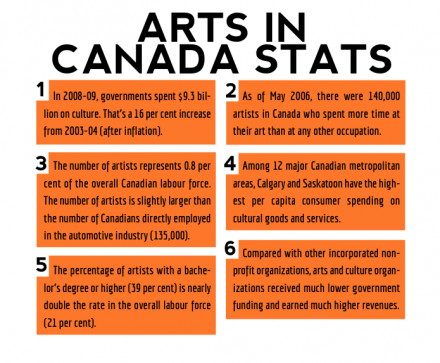 In its current state, it would be difficult to justify its continued existence. It’s become a lumbering institution having difficulty adequately responding to the modern needs of the community it claims to serve.

Most young artists don’t know about the CCA, and if they do, they most likely don’t have a strong enough opinion about its existence to care about its closure.

It seems that with the CCA advocating artists to the federal government, it has increasingly moved towards constricting, slow-moving bureaucracy and staid methods of politics, while inching further away from the world inhabited by culture producers.

The way in which the CCA tries to fulfill its mandate—improving the recognition of artists in Canadian government—is anything but transparent and accessible. Their focus is organizing conferences and committees that are directed mostly at a group of aged art institutions that probably know enough to figure things out for themselves.

On the CCA’s website, reports and studies done on relevant, interesting topics like “Provincial Policies & Investments,” “Digital Economy” and “Status of the Artist” are cloaked in unapproachable, stuffy prose.

They are not geared towards the next generation of culture producers who are trying new things, struggling to innovate ways to make arts matter on a national level.

The press coverage following the CCA’s closing has made no case for why they should continue to exist. We are supposed to support their continued existence based only on the fact that they are big and old. If they want continued public funding, they must evolve to match the current, and future cultural climate.

In our shrinking economy, redundant mandates are not viable—especially not in a sector like the arts, where public support is as contentious as it is. Many citizens have trouble seeing the return on the millions of tax dollars poured into the cultural industry, because that return is often immaterial.

“This was not the way I was hoping to end my time with the CCA. […] I can only hope that someone else will pick up the challenge. The Canadian cultural sector needs and deserves a CCA if it is to be effective and thrive.”
—CCA National Director Alain Pineau

Since 60 per cent of the CCA’s funding has come from public coffers for the past 34 years, it needs to justify that expenditure to the Canadian public. Cultural institutions play an important role in creating and advancing our national identity, but the CCA is in the hands of a well-off few, making the cultural position it holds questionable.

As such, those behind the conference needed to be working that much harder to make their case heard. The fact that they didn’t provide arguments for their continued existence reveals a lack of self-awareness. They seem detached from the greater public, whose opinion could make or break their funding.

The role they fill is essential and it’s something we should be sad to see go. Younger artists are often unaware of how to interact with governmental bureaucracy and need information on how to navigate the world of grants.

However, we need to ask ourselves whether those efforts are worth anything if the artist community isn’t aware of the institutions there to help them.

According to Alain Pineau, national director of the CCA, the organization is not disappearing—it is simply lying dormant, hoping to be revived. Maybe the people running it can take this time to regroup and rework a modernized version of their mandate.

They need to put an emphasis on communicating, with a better-built website and more accessible content and conduct outreach, so we know what we stand to lose.

Perhaps then we could muster up a reaction beyond confusion, apathy and an ambiguous sense that the culture industry in Canada is under threat. If you’re trying to advocate for artists, maybe let them know what you’re doing while learning about their evolving needs.

Rather than a top-down model telling artists what they need, it’s more productive to rebuild the institution from the ground up.

Maybe this crash-and-burn is a blessing in disguise.