Protestors demand defunding of police after killing of Sheffield Matthews

Around 500 protestors marched the streets of Notre-Dame-de-Grâce on Nov. 7 calling for the reallocation of police funding to social services.

Organised by Black Lives Matter Montreal, the demonstration came in the wake of the police killing of NDG resident Sheffield Matthews. The protest began in Trenholme Park before culminating at the site of Matthews’ killing, where demonstrators laid flowers. Matthews was reported to have been suffering from a mental health crisis the morning he was killed. 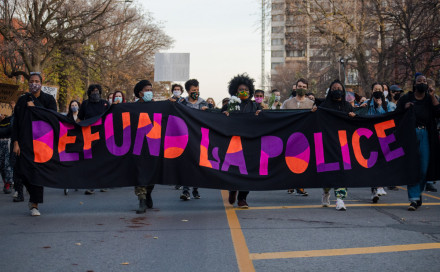 Matthews was reported to have been suffering from a mental health crisis the morning he was killed. Photo Caroline Marsh

“Whether police exist or are abolished, police should not be the ones to respond to distress calls,” said BLM Montreal representative and protest organiser Sophia Sahrane. “We want funding for social and health services and for people who have mental health training to be the ones responding.”

There have been several killings of black men in NDG by the SPVM over the years, including the 1987 shooting of 19-year-old Anthony Griffin and the 2018 shooting of 23-year-old Nicholas Gibbs, who also suffered from mental health issues.

Susan Layne, one of the demonstrators present at Trenholme Park, said she came out because she realises how mental health issues could affect anyone right now, and believes people have the right to feel safe.

“We had another resident shot by police and it’s too much, there’s too many.” —Sue Montgomery

“There’s a thin line between mental health and mental illness,” said Layne. “With COVID we could be okay one day and not okay the next day. No one should die because of mental illness, it’s not a death sentence.”

There was a solemn mood at Trenholme Park as the crowd gathered. The warm weather allowed many attendees to dress lightly and sprawl out on the grass. When the speakers took to the stage, led by the family members of Gibbs, their heartbreak moved the crowd to silence—punctuated only by the crunch of the crisp leaves underfoot. 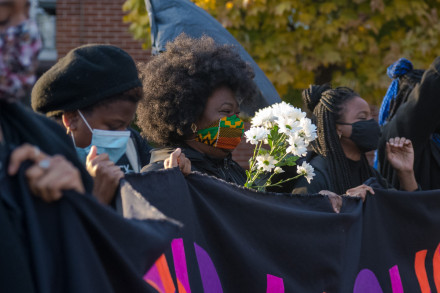 Protesters want people with mental health training to be the ones responding to calls like Matthews’. Photo Caroline Marsh

The crowd grew in strength, however, and emotional cries of “no justice, no peace” and “Black Lives Matter” soon reverberated around the park. When the crowd took to the streets, dozens of police in cars and on motorcycles rushed to flank the procession, red and blue lights flashing. The crowd showed no signs of violence and instead expressed themselves through heartfelt chanting.

It was a community in pain after the loss of one of their own. A loss that Sue Montgomery, Mayor of CDN-NDG, lamented.

“We had another resident shot by police and it’s too much, there’s too many,” said Montgomery. “It’s a tragic, senseless loss of life.” 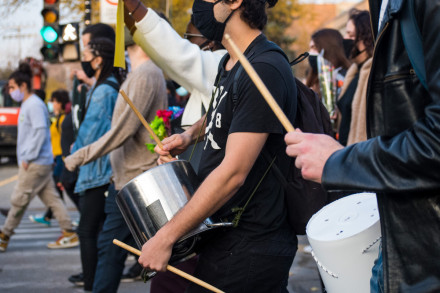 Protesters marched to the spot where Matthews was killed, where they laid flowers. Photo Caroline Marsh

“We need community policing and we need accountability of the police,” said Montgomery. “We need civilian oversight, not the police investigating the police. It’s clear that there is systemic racism in the city.”

The SPVM officers present at the protest declined to comment. The NDG community’s relationship with the police had been strained further over the summer when the only station in the borough was closed.