Ottawa Fury Edge Past “Very Good” AS Blainville Side

An early goal and heroics from goalkeeper Max Crépeau were enough for the Ottawa Fury to take the first of two legs in round two of the 2018 Canadian Championships on Wednesday night.

One minute into the match in Laval at Stade Desjardins, the Fury would strike Association de soccer de Blainville by surprise. On the counter, Ottawa forwards Adonijah Reid and Tony Taylor combined to put them up 1-0 early on. Reid sent a cross over the hosts defence to put Taylor through on goal.

“We saw them try this play many times during the game,” said Blainville head coach Emmanuel Macagno. “We got surprised because you can always see it on tape but you may have a hard time to adjust before the action occurs. They were taken aback on the first try but it wasn’t nervousness on our part.”

It was a high tempo game played by both sides. The second half saw Blainville knock on Ottawa’s door, but a dominant Crépeau would help see the game out. The Montreal native—who was loaned to Ottawa by the Montreal Impact—made several key stops, including a difficult free-kick attempt by Blainville substitute Thibaud Moulinas, forcing Crépeau to go full stretch for the glove save. “We fell onto a great goalkeeper tonight,” said Macagno.

“Our players were courageous [and] combative, they did not shy away from duels. They were solid. Even with the ball, they surprised me because they weren’t scared of playing,” Macagno said. “[We were] nervous at times but not as much as the event would have predicted. In all, they made a good outing but we still leave with a defeat.” 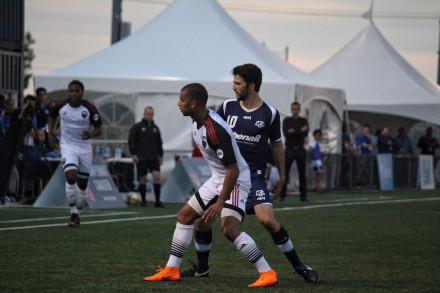 Blainville remain hopeful of putting a positive display in their second leg match in Ottawa next Wednesday. Courtesy Ludovick Martin

Crépeau and Fury head coach Nikola Popovic weren’t surprised by Blainville’s quality and physicality on the field. Popovic was full of pride for his side to come away with the win, before tipping his hat the Première ligue de soccer du Québec side for making it a “very difficult game” for Ottawa.

“We played against a team who is very good, they have very good players, players who didn’t have luck to [have an] opportunity to show themselves in the bigger stages, but that doesn’t mean they don’t have quality,” said Popovic. “We didn’t come here thinking we are from a bigger league and it’s going to be easy, no way.”

Being down a goal isn’t the situation Blainville want to be in heading into the second leg but it’s a setback Maccagno’s players will look to overcome next week Wednesday at TD Place Stadium. It will be complicated, said Macagno, but it’s a situation that he feels is doable for the club.

Both Erwann Ofouya and Pierre Rudolph Mayard—more commonly known as Papouche—share their coach’s belief for a positive result. Although Blainville conceded an early goal against Ottawa, Papouche stated Blainville are still on the right track. Papouche said Blainville showed character on the field, and believe that will help them in the return leg.

“To move forward we need to have hope,” said Blainville goalie, Ofouya. “I know that we will fight and give everything over there to have a good result.”