Walk down Robert-Bourassa Blvd. where approximately half a million people marched Friday afternoon and you’ll see “1.5 degrees max” spray painted all over the street.

That’s because, if the global temperature rises above pre-industrial levels by two degrees Celcius, more than a quarter of the world’s population will live through extreme heat waves, 411 million people will experience urban droughts, and floods from rising sea levels will affect 80 million people.

With a 1.5 degree increase, though, the number of those affected by heat waves would be 14 per cent less while 60 million will be spared from urban drought. The Earth has already warmed by one degree.

To achieve this, annual carbon emissions would need to fall by about 50 per cent between now and 2030, and reach net zero by 2050.

Armed with this knowledge and witty signs, it seemed like the entire city mobilized for Montreal’s chapter of the global climate strike. Organizers claim it was the largest protest in Quebec’s history. 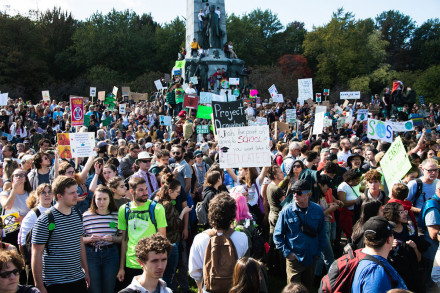 Young protesters made up most of the crowd. The message was clear: “This is our future on the line, don’t kill us.”

High school student Martin Hospitalier said it’s important for young people to be heard because “older people won’t be there to see the changes so it’s us. I’m here because if nothing changes we’ll be dead before our time.”

Greta Thunberg—a Swedish 16-year-old who started the Fridays for Climate movement and has filed lawsuits against five countries with 15 other kids—marched in the front line. The phenom who has been dedicated to spreading this science worldwide also met with Prime Minister Justin Trudeau, who she said is not doing enough.

“My message to all the politicians is the same: to just listen to the science and act on the science,” she said.

One protester, Nigel Penney, said he doesn’t believe this protest will change politicians’ actions—“we need to change the people in government.”

If they can stop projects as ridiculous as their pipeline that’d be really cool.
—Eloise Gagnon

Perry Bellegarde, Chief of the Assembly of First Nations, said “this is not just an issue for Canada. Climate destruction is a global issue.”

“There is a mother who gives us all life: Mother Earth,” he added, emphasizing how important climate activism is. “We are all one global family. We all need clean water to drink, clean air to breathe for life.”

Despite controversy, politicians like Green Party leader Elizabeth May and Trudeau participated in the march. One protester was tackled by Royal Canadian Mounted Police when he tried to egg the Prime Minister.

When asked how she felt about politicians being at the march, protester Jane Anderson said, “if it’s the Conservatives or the Liberals, shame on them.”

“They should hide their fucking faces and be ashamed. No more fucking pipelines [Trudeau], you asshole!” she added. 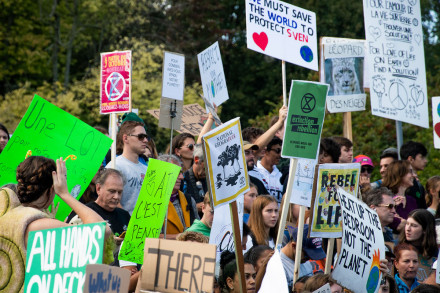 Secondary five student, Eloise Gagnon, said she and her classmates came to prove to the government they want real policy change. “If they can stop projects as ridiculous as their pipeline that’d be really cool,” she said.

But, this message isn’t new. Indigenous Peoples have been fighting for the Earth for a long time, but Trudy Jacobs, a social worker in Kahnawà:ke, said that profit seems to trump the planet.

“They’re going to hear us, but what is actually going to get done?” she asked. “We need to go to renewable energies—get rid of all the fossil fuels, they’re outdated.”

Bellegarde echoed this decision. He said companies need to put the planet first, then people, and profits third.

“We are sending a message to the leaders of the world to think seven generations down the road, to make good decisions now,” he said.

This article has been updated to reflect the final number of attendees, which was recognized by Mayor Valerie Plante as at least 500,000.