The second season of the Pro-Amateur basketball league, Ballers Echelon, took place at Ecole Saint Laurent this past Saturday.

Shifting out from the stingers gymnasium to a new spacious home court at Express, the league led by Dwayne, Damian, Dwight, and Dillon Buckley looks to bring more accessibility and accommodation to the basketball community in Montreal.

A lot of the basketball talent is spread across Montreal, which made it difficult for players to participate on a regular basis last year.

“We have a lot of players from laval, the south shore, and east end and it was tough to find a location that was great for everybody but for now at least we have a bigger gym,” Damian said.

“Well for one the gym location, the facility is more spacious,’’ he said .

Ballers Echelon looks to focus more on the little details in its second season instead of making numerous changes.

“With this year I would not say there is anything new just more enhanced,” Damian said. 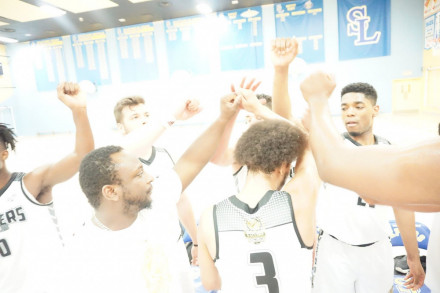 Second year Coach Alex Augustus and his players show teamwork as they huddle up before facing opponent. Photo Dwight Buckley

The league this year has enhanced jerseys and uniforms for referees. “We have a bigger gym , better uniforms, and better location,” explained Damian.

The attention to detail Ballers Echelon made this year also brought out a different level of basketball compared to their inaugural season.

Joseph Chartouny of team Landslide, who played four years of NCAA basketball noticed the competition level was higher than expected.

“The competition level is high in this league. we lost our last two games. From what I heard last year the league got really better,” Joseph said.
In terms of their competitors, Damian recognizes the success of the Crown league in Toronto and The Drew league in Los Angeles.

“Both those leagues started small and built there way up and with us just one year in we know we have to fight our battles to get there and progress to get to that point,” said Assistant coach of the stinger men’s basketball team.

The current changes Ballers Echelon has made this year like location, quality of players, and uniforms brings them one step closer to competing with the other top pro-amateur leagues.
However, Damian understands that reaching high attendance levels and acquiring multiple sponsors takes time.

“Both those leagues started small and built there way up and with us just one year in we know we have to fight our battles to get there and progress to get to that point,” Damian said.

Another obstacle the league has this year is charging players. Most players are university students who have a hard time providing the funds to participate.

“Not everybody has it and we understand how it is to be a student athlete and not everyone has 150 or 200 dollars to play in our league” Damian said.

The issue of having to charge players in the future can be solved by sponsors getting involved to lower cost of players. Sponsor Niva were responsible for the updated jerseys and uniforms for referees this season.

Apart from sponsors, Damian and his brothers have chosen to improve more on marketing and media this year. The brothers have created Echelon media, which will allow them to produce highlights and full recordings of games faster than last season.

“A little bit of the struggle was getting things out quickly, and now we are in control of that is a big win for us , and it’s going to help us get where we want faster,” Damian said.

He believes their marketing and Media campaign will separate them from other leagues this season.

“All our games are taped, we have highlights out a few days after to give the ability for someone to watch on social media and if the highlights are good people are going to share it,” he said.

The surprises coming this summer for the league are events, special guest and more NBA talent but Damian is keeping that information secret .

“We got some great surprises and some players coming I would rather not say right now but stay tuned to our media pages on facebook and Twitter,” he finished.

Games run on Thursday and Saturday evenings at Ecole Saint Laurent till June 30th, where another summer of highlights and excitement is set to resume.