Generation Z Breaks Through the Clutter with Glitched Fashion

The crowds gathered around the Casino de Montréal runway, the corporate sponsor trying to lure a hip, young crowd into spending their dough at the gambling establishment with a carefully-crafted advertisement. This catwalk was the crown jewel of Montreal’s very own fashion week, Festival Mode et Design, rolling out all week from Aug. 17 to 22 at Place des Festivals.

Several themes and ambiances struck through the runway show. Apocalyptic or futuristic, minimal or architectural, opaque or translucent, prude or revealing, the show illustrated ideas about silhouette and style, winking at contemporary expectations yet imposing itself as a manifesto for de-constructivism and playfulness. The layering game was on fleek, here and there in monochrome for a very industrial feel, elsewhere in bubbly pastel pink fit for dreams of a better world, or of a self-aware insouciance.

On the whole, the event, as one can expect of an announced avant-garde show, broke the moulds and gendered stereotypes of normalized, mainstream fashion. It featured leggings, skirts and crop tops for boys, sometimes paired with a leathery face mask that underlined the visible skin the stylist chose to bare. 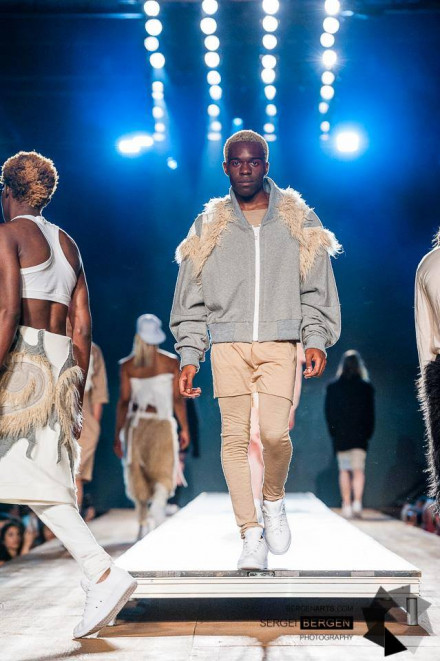 On the opposite end of the slim-fit spectrum, and in a very androgynous move forward, oversized silhouettes were all the rage: loose tees going all the way down to mid-thighs; cargo shorts and pants reminiscent of the ‘90s rave scene; capes and ample boxy coats. Contemporary designers dared to use more fabric, sometimes for a very ingénue look, other times allowing the flowing drapery of the fabric to float in an almost regal way behind the models who, on a side note, were refreshingly out-of-the-corporate-box and predominately multicultural.

The show was punctuated by performances by contemporary dance crews shuffling and voguing to trap remixes. Acts featured DJ band Qualité Motel, repurposing electronic music and Québecois hits alike, all clad in daring colourblock ensembles. From drone to rap, the beats were bumping while the models walked down the platform. The visuals behind them, oftentimes glitched, referenced the virtual communities we all live within, presented in quick flashes, alluding to the sheer volume of information one processes day after day. The complex and layered silhouettes confronted us with the consequences of superstimulation, while demonstrating the continuum of identity construction, in a place where the creation of the self happens in contrast to the expectations and legacies of clothing.

The atmosphere flowed with festivity, but still had a revolutionary, if not angry, undertone. Clothes as armour, flowing capes and coats of the urban nomad, masks and scarves, ready to fight. You do you, Montréal, make and take your place, millennials, reify the change you want to see in the world.
Well, that’s what I took from it. Can one really disentangle body politics and the creative outlet that is fashion? Surely, the social struggles of the youth, the famous Generation Z, that crafted these pieces cannot be left behind, and they have to be accounted for. After all, the future is a vision that is drafted au quotidien, like the clothes we wear on our backs.