“As Artists, We Live a Lot in the Moment. We Create Without Time Constraint”

The alternative art space Peripheral Hours celebrates its one-year anniversary with its third exhibition, Site of the Not Yet. The group show invited 35 performance and visual artists to explore the concept of the unfinished.

“This is a thematic where a lot of artists were really driven by the idea,” said founder of Peripheral Hours, Victoria Catherine Chan.

“It inspired so many works that were made either spontaneously and on the spot. But It also encouraged artists to present some unfinished works.”

Curated by Chan in less than two weeks, Site of the Not Yet shows the works of emerging and established artists, all of which revolve around incompleteness.

She transformed her family-owned triplex in the Chabanel District into a do-it-yourself art space, which makes for an immersive and interactive art experience.

While her basement is in the process of being turned into affordable artist studios, Chan decided to look beyond the annoyance of renovations, and make use of the available space. 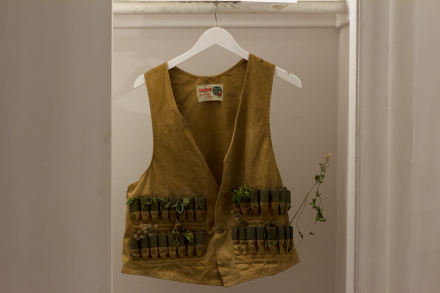 Lavdovksy also had her piece ‘futility vest’ at the show. Photo Olivier Cadotte

So, she organized the spontaneous exhibition, in which paintings, sculptures, video installations, and interactive performance pieces celebrate the beauty of artistic processes in suspension.

“I actually think it’s more interesting to talk and explore and contemplate around the unfinished than something that is a final result,” said Chan.

What is special about exhibiting in a household is that it opens up infinite possibilities of exploration, for both the artist and beholder.

When you notice a man constantly sweeping the floor, and a sink strangely placed on stairs, you find yourself in an environment where the lines are blurred between what’s art and what’s part of the decor.

On the other hand, when you are showing your piece, the possibilities are endless in the way you choose to portray it.

Chan chose to hold off labeling the artworks, in order to foster the viewer’s curiosity, which also gave a funhouse feel to the space. Simultaneously, it distanced the DIY space from commercialized art galleries.

“I actually think it’s more interesting to talk and explore and contemplate around the unfinished than something that is a final result.” — Victoria Catherine Chan

Diyar Mayil is a performance artist who contributed to the show with a participatory performance piece. People were invited to sit at the kitchen’s dining table, with their arms constrained thanks to adjustable casts. They were then challenged to eat an entire piece of raspberry cake.

The participants were left to find ways to cohabitate in an uncomfortable setting, which acts as an allusion to the idea of watching your words to avoid having uncomfortable discussions with family members over meals.

It recreates a relatable situation where you avoid taboo conversations, yet feel forced to partake in a domestic collective activity.

Chan is an advocate for the BIPOC (Black, Indigenous, People of Colour) artistic community because of the lack of spaces, visibility, and exposure opportunities in the contemporary art scene.

Her community-grassroot approach is a strategy of offering different alternatives regarding art-making and presenting their art.

Out of the exhibiting artists, 55 per cent were BIPOC, and 70 per cent were female artists, while a considerable amount identify themselves as non-binary, queer, and trans. 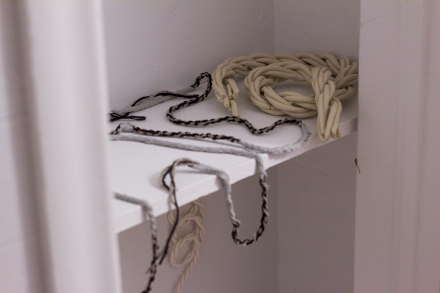 Etta Sandry’s work ‘Inside voices’ was shown at the exhibit.

Chan works towards inclusive programming for BIPOC artists to reclaim their space in the artistic world, with the long term goal of building a healthy and inclusive community.

To do so, Chan stressed the importance of incorporating DIY art spaces into the conversation, instead of exclusively focusing on the art institutions and organizations who have “their own limitations, competition, and bureaucracy.”

“DIY spaces [are] a very small niche, but it does exist,” said Chan.

The process of calling for submissions in institutionalized exhibitions can take up to two years before finally exposing.

Amidst the respect Chan has for them and the artists that take part, Chan warns that the lengthy process of going about presenting artworks can often clash with the creative nature of art-makers.

“As artists, we live a lot in the moment. We create without time constraint,” said Chan.

The third edition of Peripheral Hours was a way to deviate from that issue, and allow for incomplete and drafted works to be presented and discussed.

The participating artists come from all over the world, and indirectly addressed what is happening in their home countries, whether it’s China, Brazil, Egypt, Turkey, South Korea, Lebanon, Iran, or Canada.

Chan’s building acts as a centre where over the border issues are brought to the forefront thanks to art that is deeply connected.