Hundreds of students surrounded Google’s new Montreal headquarters, which were being unveiled at a press conference with Premier Jean Charest on March 20.

Around 500 protesters, many of whom were Concordia students, flooded both entrances to 1253 McGill College Ave., making it impossible to get in or out. They chanted and blasted air-horns, causing as much noise as possible.

To disperse the crowd, the SPVM eventually pepper sprayed the protesters.

“Students were absolutely peaceful. I was pretty disheartened to see the police respond the way they did,” said Concordia Student Union President Lex Gill. “Thankfully no one was hurt, everyone was okay afterwards and the situation didn’t escalate from there.”

Protesters came prepared with extra water to wash their eyes out with and using bottles of Maalox to sooth their burning skin. Some even pulled out swim goggles to protect their eyes. 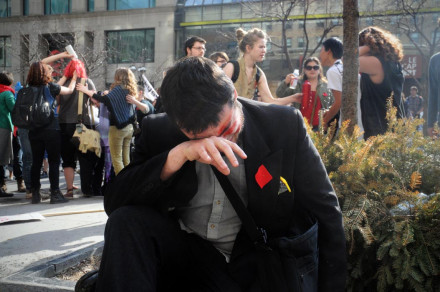 After an hour of peaceful protest, the police eventually dispersed and so did the protesters.

It is unknown when or where Charest made his departure, none of the protesters saw him go from either of the street entrances. A security guard in the main entrance reported that Charest had left hours earlier than expected.

“I don’t know that [Charest] was trapped in the building, but certainly his day was disrupted and the press conference was disrupted, which is the goal,” said Gill. “[We want] to draw attention to the strike and make it clear that these ministers can’t just go around inaugurating things and having press releases without students paying attention.”