UQAM Puts on a Show, Scoring 27 Points Off Turnovers by Concordia

Following their gutsy overtime win over the Laval Rouge et Or, the Stingers traveled to UQAM looking to stay undefeated. With the crowd buzzing and seats filled in a playoff type atmosphere, Concordia’s offence seemed startled and faced problems. At the apex of them all: turnovers.

Basketball is a game of runs, momentum shifts and most importantly discipline. Undisciplined basketball leads to mistakes—unforced or not—the Stingers know they didn’t give themselves a chance to win.

Rallying behind their deafening and passionate fan base, UQAM took Concordia out of their comfort zone early. They disrupted the Stingers’ offence, and head coach Popovic made it clear his side failed to adjust under pressure.

“They were aggressive, they deserve the win,” said Popovic. “At the end of the day, we have to take care of the ball. If we don’t turn the ball over, this is a one or two possession game,” he continued.”

Both teams went back and forth in the opening eight minutes until the Citadins amped up their stringent defense and stalled Concordia’s offense.

Adrian Armstrong, who garnered “oohh’s and aahh’s” from the crowd with his four three-pointers in the first half, knows UQAM feeds off their defence to generate scoring opportunities. Despite his team high 23 points and 37 minutes played, the Citadins suffocated the Stingers enough to get the win.

“That’s their style, they want [Ra-Ra], they wanna get in your face and we just folded to early,” said Armstrong describing the hostile environment.

Concordia trailed most of the game but were always chipping away at UQAM’s ten point cushion. However, the Stingers shot themselves in the foot a number of times during the game, notably at the end of quarters.

After a turnover late in the second quarter, UQAM’s Christopher Jean sized up his opponent with seconds left on the shot clock. Jean broke down his defender and drilled a buzzer beating three pointer that gave his team a 44-35 advantage at the half. The building erupted with cheers, meanwhile coach Popovic let it be known this is unacceptable in a tight game.

“We just gotta be more tough, we got killed on offensive rebounds. We got a lot of turnovers too, if we work on that we’ll be fine,” — Ricardo Monge

“We can’t make that many mistakes and expect to win,” he said. “Instead of getting a shot to trim the lead and quiet the crowd, we turn it over. We gave them too many opportunities.”

Heading into the third quarter, the Stingers offense led by Senior Ricardo Monge stifled as only one player was in double figures. The veteran point guard finished with 13 points but secondary contribution lacked from other players. The Stingers couldn’t find a rhythm, they lost grit and focus.

“We just gotta be more tough, we got killed on offensive rebounds. We got a lot of turnovers too, if we work on that we’ll be fine,” said Monge.

Defending two-time Canadian Collegiate Athletic Association men’s basketball player, Alix Lochard, owned the second half dropping 17 points and a highlight dunk on the baseline. UQAM’s star Freshman had a sluggish beginning but picked up his game when it mattered most. 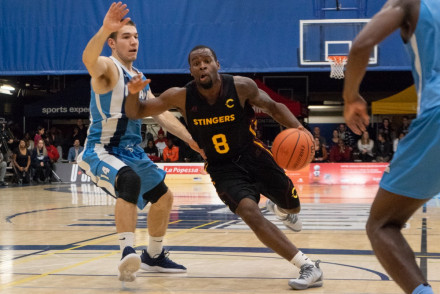 Cedrick Coriolan pushes the offense in a losing effort against UQAM

“In the first half, I wasn’t myself, I started slow,” said the six-foot-six forward. “In the locker room, I sat down and reflected on what got me here today. Fortunately, it paid off. “

The Citadins’ balanced attack with four players in double digits looks good to Lochard but he says there’s no reason to be content. He explains the team needs to focus on being consistent and defending home court.

“It feels good to get the win, but it’s a long season. We’re gonna look to win as many games as possible,” said Lochard who put up a team high 23 points and 11 rebounds.

For head coach Popovic, the feeling is similar. In a conference of four teams who play each other four times a year, the marathon has only just begun. Popovic trusts his team will make the necessary tweaks to compete at a high level next game.

The rematch is set for Dec. 1 at the John Dore Gymnasium at Concordia, where the Stingers will seek redemption in a tough battle for first place.

“We’ll be better next game, the league this year is very close,” said Popovic.