Naming your pets after food is undeniably adorable

My dream pet is a fluffy goldendoodle named Knish after the Ashkenazi Jewish delicacy of mashed potato encased in puff pastry dough.

Not only will Knish look like a knish, but I’ll be able to teach all the kids who stop to pet him on the street about this delicious treat from my culture. Clearly, I’ve thought about this a lot.

But since I can’t convince my family of our dire need for a pet, I’ve decided to live vicariously through other Concordia students by discussing their choices of adorable food names.

Ev Osmanovic has a cat named Croissant. “I feel like it’s sometimes just because the animal resembles the food in some way, whether it be the colour pattern or the way they sit,” they say.

Osmanovic explains that they and their partner had planned on naming him something related to death metal, but once they pointed out that he curled up like a croissant, their partner insisted on making that his namesake.

“That’s the dumbest fucking name I’ve ever heard,” Osmanovic replied at the time, but the name stuck—and it’s objectively precious. 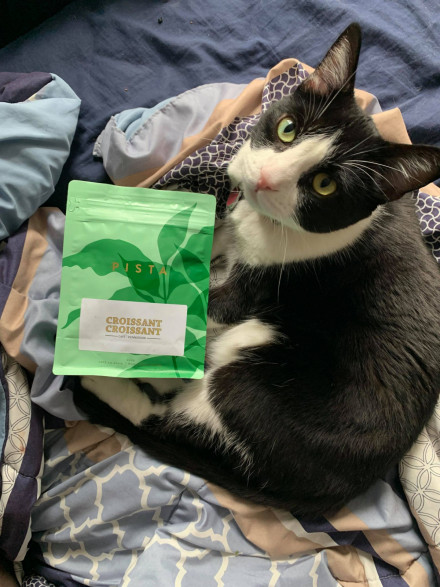 Yan came up with his dogs’ names spontaneously. His mother was feeding his first puppy many different fruits, and the dog took a particular liking to papaya, so that became his name. Chow Mein was christened so because Yan was, you guessed it, eating chow mein at the time. “It’s just funny naming animals food names,” he says.

Mackenzie Sanche had guinea pigs named Sugar, Timbit, and Brownie. She gave Sugar her name because she “always acted like she had a sugar rush; she was just so energetic.” Sanche explained that her brother named Timbit because the guinea pig looked like a chocolate donut hole and had very sleek fur. And Brownie was brown, so it just seemed fitting.

Unlike Yan’s Papaya, the guinea pigs didn’t eat their namesake foods. “They stuck to alfalfa grass and other guinea pig foods,” says Sanche, laughing. I think it’s safe to say that was probably for the best.

Food-related names are often terms of endearment for humans, like calling someone muffin, snickerdoodle, or honey. This could also be part of the appeal for naming pets after snacks.

Personally, I think giving pets food names is a great conversation starter. People will ask whether you’re particularly partial to the food and might venture into a lighthearted but heated conversation about their own preferences. If it’s an obscure or cultural food, it allows for an opportunity to learn. Talking about and trying new food is a convenient way to get to know someone, so help from furry friends is always appreciated.

Whatever the reason for this phenomenon, pets with food names are inherently cute—but maybe that’s just all pets. Either way, this hard-hitting piece of journalism allowed me to connect with wonderful people and animals alike, and what’s better than that?

This article originally appeared in The Link The Food Issue, published November 3, 2020.