A Summer With Family Exploring a Different Kind of Lifestyle

I shot a gun for the first time this summer in southern California.

It was June; a blue sky, squint your eyes in the sunshine type of day. I was with my uncle Tony. I went to California to spend time with my extended family, a group of more than six families, not including my grandma, who now spends her days going to cooking classes and watching Jeopardy.

My relationship with Tony until this visit consisted of shy pleasantries at bustling family gatherings and rare exchanges on Facebook. My goal was simply to spend time getting to know a side of life that I never explored before.

Tony and I became great friends, and for that I’m so grateful. He’s this boulder of a guy and, cliché, the nicest person you’ll ever meet. He’s been a lot of different things—track coach, park ranger, carpenter, and most recently, an LAPD security officer. He’s on medical leave though, so we had a lot of down time together.

Tony’s a frequent hunter, so I wasn’t surprised to hear one day that he had a six foot tall gun safe hidden in a cabinet in his dining room. The amount of firepower in that safe was impressive. I jumped at the opportunity to go shooting when he offered to take me to a range one day, not because I share his love for all things ammunition and hardware, but I was curious.

I’m anti-violence, and following, I’m anti-gun. I see guns as protection and some people’s tools for finding food. Tony calls them “toys.”

At the range, the gun felt heavy in my grip, like holding a cast iron pan in one hand. I gave it a fair run I think, I tried my best to understand what made Tony so happy about doing this with his free time. As I stood between two separators amongst grey stone floor and walls, I awkwardly loaded the cartridge, lifted the gun up with my arms out in front of me, and took aim at the poster we put up of a zombie moose. Tony noted that if I was trying for a fatal shot, I’d have to aim for the mid chest. 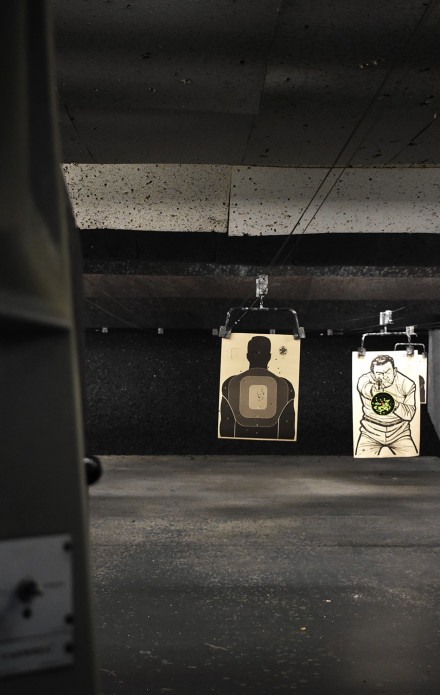 Hand gun ranges are usually formatted as a stationary booth, with an opening at the end of an aisle, spanning down around fifty feet in some cases. A wall of loose black gravel catches bullets at the end of the range.

I don’t want to talk about Trump anymore. I want out of my liberal echo chamber and I want other people to come with me. I’m tired to a point of frustration, like coming home exhausted to a bed with too many clothes on it so you end up just throwing it all on the ground, to deal with tomorrow morning.

I took these photos to remember what it was like shooting a gun. Doing it didn’t warm me up to the idea, but at least I know exactly what I disagree with now. After being in the U.S. briefly post-election, I saw that the division between some people who were searching for solace or understanding amongst others who felt the same way as them.

In Los Angeles, I learned again and again that there’s value in exposing yourself to things that you don’t usually expose yourself to, whether consciously or otherwise.

This summer was an exploration of things that I never had, such as learning what it’s like to spend time with family members that up until recently were strangers. Or driving a pickup truck down busy suburb streets after biking for months straight in Montreal. Or sitting on the couch and flipping through a magazine by cops for cops that Tony gets at his house.

Living in a world, even for a brief moment, that is opposite of your daily life is beneficial.

It can make our values stronger, and sheds new perspective on things. It gives us fresh appreciation for the things that we have, and the world gets bigger. We all know there are benefits of trying something new. You don’t have to live in it forever, but visiting the grass on the other side could do us all some good.

I doubt that I will ever grace an L.A. shooting range on a sunny afternoon ever again. But at least it happened. I learned about the hardware and what it feels like to send a bullet flying, and how some people build a sense of confidence stemming from their firepower.

My stance hasn’t changed, but my perspective has. Support and understanding are different things. I want to live with more of the latter. And fewer guns.