Protest Against Deportation of Undocumented Mother

Close to forty people joined Hashmi at a sit-in on Monday to continue the three week long effort to stop the deportation of Lucy Francineth Granados.

Hashmi, along with many other supporters, have visited the Immigration Canada offices on St-Antoine St. every day for six days as part of a “Mother’s Sit-In” to denounce Granados’ deportation that is scheduled for April 13.

They want to send a clear message that undocumented women and workers should not be treated with violence and abuse.

“We will not allow the [Canadian Border Services Agency] to determine the lives of undocumented mothers and women in our community,” said Hashmi.

“As a woman and as mothers, we stand together against this violence. We oppose the exploitation of women and workers. We refuse the violence used against us to facilitate exploitation,” said Hashmi. 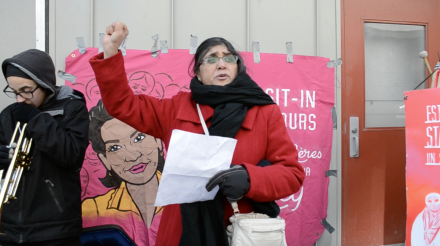 According to Mary Foster, a member of Solidarity Across Borders, the case now sits with the federal court, but she said that federal immigration ministers are able to reverse deportations if they intervene.

“They have her locked up,” said Foster. “What we can do at this point is just try to get to those ministers, to convince them that Lucy should stay.”

A group of women from the Non-Status Women’s Collective have already delivered a letter to Valerie Plante, asking the mayor to stop Granados’ deportation and to commit to making Montreal a sanctuary city.

Granados was taken from her home by CBSA agents on March 20 and placed in detention. Her deportation was originally scheduled for March 27 but was postponed due to deteriorating health triggered by stress, which hospitalized her twice.

In an earlier report, it was stated that in 2016 the SPVM made 2,389 calls to the CBSA to inquire about a person’s status. These calls were made to confirm the assertion of an undocumented person.

The following year, police made an extra 2,311 calls to the CBSA for the same reason.

The SPVM have yet to end their collaboration with the CBSA.

According to spokespeople from Solidarity Across Borders, the CBSA agents used excessive force when they apprehended her, damaging her arm. Those who have visited Granados in detention say her arm is still in a sling and she has limited mobility.

Granados moved to Canada from Guatemala in 2008. Upon her arrival, she applied for refugee status, hoping to one-day bring her children to Canada, but was denied.

After years of living without status, Granados submitted an application for citizenship on humanitarian and compassionate grounds which has yet to be processed.