Montréal 3, Concordia 2: Stingers Women’s Hockey Team Bows Out in the First Round For Second Consecutive Year

Annabel Faubert’s Third Period Deflection Sends Carabins to Next Round

“I thought we had a really great first period,” said Stingers head coach Julie Chu. “Unfortunately, I think they outworked us in our second period and that ended up being really the difference maker.”

Chu didn’t need too many words to summarize the afternoon. Giving up two goals in the second period was definitely an issue for the Stingers as it forced them to play catch up early in the third period.

It ultimately took a very close call, and a five-minute deliberation between the referees, to help the Stingers tie the game nearly halfway through the third. Audrey-Ann Rodrigue’s shot slipped past Maude Trévisan and trickled just past the goal line.

The fans might have helped sway the referee’s decision on Rodrigue’s tying goal in the third, but their cries on other tight calls were ignored for the rest of the period.

After the game, Chu refused to blame the loss on the non-calls. 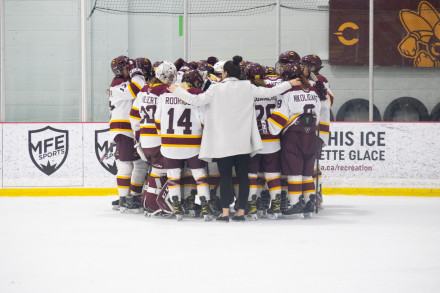 For a second year in a row, the Stingers are sent packing in the first round. Caroline Marsh

“We always talk about controlling what we can control,” she said. “What we do control is our ability to work hard, to execute, to make sure we stop on pucks and are doing the little things really well. And unfortunately, we got away from that in the second period, and then the third period.”

Last season, Concordia fell to the McGill Martlets in the first round of the Réseau du sport étudiant du Québec playoffs.

This year, once again, their playoff woes continue. However, being ranked number one in the country for the majority of the season, this loss is certain to sting that much more.

Knowing the RSEQ is one of the toughest divisions in Canada, head coach Chu couldn’t be happier with her team’s competitiveness and grit all year long.

“I’m so proud of this group,” she said. “Montreal is a great team. So I take my hat off to them, but it doesn’t take away from all the efforts and everything that this team has done all season long and how proud we are of this group.”

The defeat also brings some Stingers’ career to an end. Erica Starnino, Olivia Atkinson, and team captain Claudia Dubois will all be graduating this year.

The defeat looked to take its toll on Dubois who sought comfort from many of her teammates and Chu before leaving the ice for one last time as a Stinger. 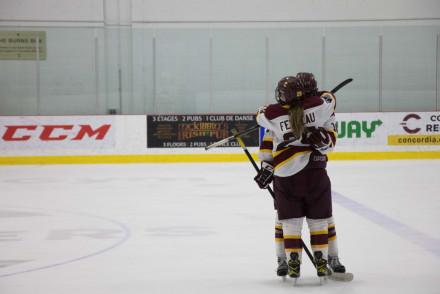 The head coach had nothing but kind words for her captain following the conclusion of her U Sports career.

“She’s the one that’s gonna make me cry when she leaves,” she said. “When she came in, we were still figuring out how to win, how to build a culture, how to get to the next level. She’s a huge reason for getting to this next level.”

This is certainly not the scenario anticipated by Chu and her team after an outstanding regular season.

“It’s gonna sting for a while,” she said. “When we care about what we’re doing, when we’re passionate, when we put in the time and effort. It’s gonna hurt when we don’t get the end result that we want.”

The loss was too fresh for players to reflect on it following the game, but look out for our upcoming season recap for the Stingers’ women’s hockey team.