Concordia Students Make Space for Themselves in the Montreal Art World

Tyra Maria Trono believes that even if it has been considered a dying medium, analog photography has gained notoriety recently.

Alongside fellow Concordia student Edson Niebla Rogil, Trono curated For The Sake of Analog: Troisième Édition at the Gallery Parfois between June 6 and 9, a show which celebrated analog photography, as part of the MURAL Festival.

“Digital technologies [further enabled] the democratization of art,” said Rogil. “Some people who never had access to make [artwork] now do more easily for less money.”

Yet with the praise of the vast digitization of photography, Rogil believes it has also enabled the saturation of “easy, lazy, quick” artwork.

For the curator, there is a process that is respected when it comes to analog photography. One must make every shot count.

“We’re trying to find middle ground,” Rogil said. “You have a lot of events in Montreal that are inaccessible to people who don’t study art.”

The curators took it upon themselves to create a space and show which is welcoming to people who have no knowledge of the art world or its mediums and practices as well as those who are more experienced.

Rogil said that “there are people who come from certain ethnic communities and have certain sexual identities or that are […] ignored in the main art conversation.” Both curators are consciously looking for artists who aren’t getting attention from the mainstream.

“We’re trying to find middle ground. You have a lot of events in Montreal that are inaccessible to people who don’t study art.” — Edson Niebla Rogil

Serna’s series highlights the phenomenon of growing up. The body of work was taken during a trip to Colombia, where she was born, to see her family.

The photographs themselves seem indecipherable at first; the subjects in her work are very specific to her time in Colombia, and yearns for the viewer to decode its meaning.

Her photographs were taken with a sense of childhood whimzy. “I just wanted to see the places I visited as a child,” said Serna, “and what I can […] find interesting now, that I couldn’t see when I was a kid.”

Part of her process for these photographs was the constant mindset she put herself in, one in which discovery and wonder seemed to flourish.

“Seeing garbage but finding it beautiful and weird, that’s kind of what I did,” she said.

“Instead of normalizing it or seeing with a moralistic point of view,” she added, “I was seeing it [as a] magical thing.”

Her photographs are the result of “seeing things with a different eye.” What was originally familiar becomes wondrous and nearly mythical through Serna’s lens.

“I try to create a moment, then capture the moment as truly as I can,” Marcéus explained. His two large portraits of Black women are facing each other, and both are part of a much larger series titled Cream Filled Chocolate Candies. 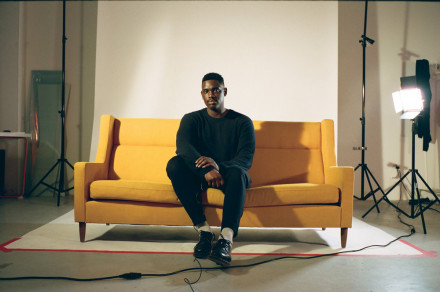 Schaël Marcéus presented paintings from his series ‘Cream Filled Chocolate Candies’ at the exhibit. Courtesy For The Sake Of Analog

The series is about life, and the experiences one may have as a second-generation immigrant.

The inspiration came from Marcéus’ own personal upbringing, most significantly when he changed schools—a transition from a multicultural public school to a private school in the suburbs.

“I was curious [to hear about] the in betweens,” he said. “Stories of people like myself that have no problem navigating whichever scene.”

Yet, he explained that this sort of navigation comes with “microaggressions and little things that are particular to being the son of an immigrant.”

Marcéus explained that he wanted to use photography to tell stories.

In curating the show, Trono and Rogil have created a space which enabled local artists of diverse communities to seek out their individuality through the medium of analog photography.

There is an element of the unknown when it comes to curating a show. “I like how I can’t really control everything,” said Serna.