Loss Sets Stingers up for Do or Die Game Versus McGill

It would be reasonable to call the Stingers unlucky after All-Canadian guard Myriam Leclerc’s injury and a series of questionable foul calls stymied their momentum in Saturday’s loss to Laval.

Despite this, head coach Tenicha Gittens believes her team could have done more to secure a much-needed victory.

“I think for the most part things were in our control. I always say this: the one thing you control is defense and I think that we had some lapses there that cost us,” said Gittens.

The Stingers defeated Le Rouge et Or by a 15 point margin on the road just two nights earlier and were confident in their chances of securing back-to-back wins against their nationally ranked opponents.

“I know we felt good coming into this game. I know I felt good, [the players] felt good. I thought we put together a really good few days of practice leading into this,” said Gittens.

Sophomore Nelly Owusu was at the forefront for Concordia in the first quarter, picking up two steals and even more deflections to disrupt Laval’s offensive flow.

Owusu grabbed a steal and raced to the basket on the fast break for her sixth points of the game to put the Stingers up 15-14 with 48 seconds to go in the first frame. The guard finished the game with 13 points and a game-high nine rebounds.

Laval guard Maude Archambault promptly answered back with a bucket of her own to give her team a slim 16-15 lead to end the quarter. Buckets would be a theme for Archambault throughout the game as the rookie finished with 20 points.

The Stingers built up momentum, fighting for rebounds and creating second and third chance opportunities to race to a lead. The Stingers were up 27-22 when the injury bug that has plagued them all season bit again.

Guard Myriam Leclerc appeared to trip over an opponent on a routine play and went down screaming and clutching her knee.

After a significant pause to get her medical attention, Leclerc had to be helped off the floor and did not re-enter the game. While her status was unclear at press time, it is unlikely she will see action in what may be a short remainder of the season if her team does not make the playoffs.

“I mean we’re going to figure it out […] everything should have mattered from day one and non conference, but right now is when we really have to be tight and we really have to show our fight.” Tenicha Gittens

Losing a starting point guard is a blow to any team but the Stingers stayed afloat in the absence of their top scorer. Forward Greta-Olivia Ineza hit a three to put the Stingers up 30-22, their largest lead of the game before a quick 5-1 run cut their lead to four at the half.

Ineza finished the game with 11 points, a season high for the second year forward.

The third frame was all Laval. Le Rouge et Or outscored the Stingers by 11 and were led by Archambault’s free-throw shooting, heading into the final frame with a 48-41 lead.

Concordia forward Nikita Telesford saw limited action in the game due to foul trouble. Coach Gittens was animated in her discussions with the referees, particularly in the second half of the game.

Telesford’s final foul was the source of much discussion on the bench and in the crowd as it appeared the defender held her before the foul.

With Leclerc out and Telesford on the bench, fifth year guard Caroline Task attempted to single handedly drag her team back in the game. 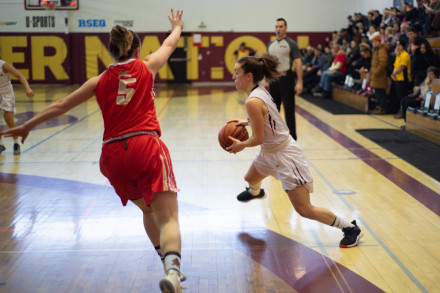 Caroline Task makes move to the rim with defender Carie-Anne Auger closing out on her. Photo Caroline Marsh

“She is the most veteran on the team,” said Gittens. “If anybody is able to put our team on their back, it’s definitely her and she knows that. Myriam is out and we [weren’t] looking for anybody else but really for her to kind of will our team to within reach of getting that [win],” she finished.

After hitting two free throws and a three pointer, Task stole and hit another three on the ensuing possession, cutting what was 10 point Laval lead to one. The fifth-year player played all 40 minutes and dug deep to keep going late in the game.

“Great players do that. They step up in big moments and big time and I think she did that, she’s really, really banged up. If I had depth I probably wouldn’t play her as much because she’s hurting,” said Gittens.

Unfortunately for Gittens and her team, Laval had great players on their bench, too.

Laval guard Leslie Makosso scored 12 of her 14 points in the quarter to put the game to bed for her team. The rookie went two of three from beyond the arc in the final frame after missing all five of her previous attempts.

Saturday’s loss means the Stingers must win all three remaining regular season games to stay in the playoff race and hope McGill or l’Université du Québec a Montréal lose two or more of their remaining games.

Next Saturday’s game at home against McGill is doubly important, as the Martlets sit one spot ahead of the Stingers in the Réseau du Sport Étudiant du Québec standings and a win for Concordia would not only keep them in the race, but chip away at their opponents’ chances.