Femme-Fronted Music Festival Emerges in a Sea of Dude Bands

Maryze’s eyes glimmered between silver, sparkling eyeshadow. On Aug. 30, the first edition of the Hot Tramp festival welcomed the singer-songwriter who performed music from her debut project Like Moons.

The festival emerged from Sarah Armiento’s Hot Tramp Management company, and Maryze is one of Armiento’s talents.

Armiento explained that production companies are costly and often unattainable for artists. In contrast, Hot Tramp is an accessible option.

“As opposed to the bigger companies,” said Armiento, “I have a relationship with every artist that I work with. I believe in their music. I go to their shows. I knew them before I started working with them.” 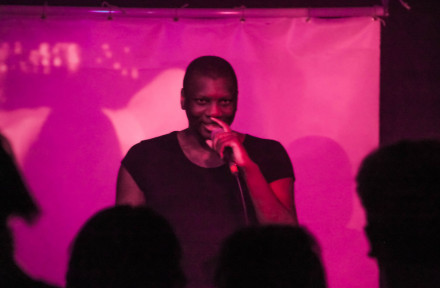 Armiento explained that her work is relationship and trust-based, something she finds is lacking in the industry. The young music mogul and the face behind the Hot Tramp logo launched the management business last spring and orchestrated the music festival with seven shows running between Aug. 28 and Sept. 1.

As one of the femme-fronted acts, Maryze performed her soulful singles. After touring alongside Montreal-based siren Janette King and releasing Like Moons with Hot Tramp, the bilingual artist described her style and sound as stormy sweet pop R&B.

“There’s a sweetness and softness to it,” she said. “Then there’s also stronger and darker emotions that come through.”

Beneath the hue of colourful lighting, Maryze engaged the audience with her soothing voice and electronic percussion. She glowed on stage with soulful lyrics that go deep into her feelings and that elaborate on mental health.

“The festival world has been dominated by dude bands for so long, and over the past year, there are spaces being created for femme artists and I just kind of got that energy and picked up on that momentum.” — Sarah Armiento

Maryze shared the stage with local musicians Night Lunch, L.A. Foster, and Backxwash, who wooed the crowd with songs such as “Don’t Come to the Woods” and “Bad JuJu” from her first album Deviancy.

“The lyrics have always had gothic elements in them,” said Backxwash, “but I guess just expressing that and having that show up in the visual side is something I never really did.”

The rapper doesn’t hold back when she performs. The anger expressed through her lyrics is vivid on stage. Backxwash strings together what may seem unlikely to fit. Deviancy is the result of the combination of different samples, from Rhianna and Patti Smith, to tribal chants assembled over a distorted bass, “and angry raps.”

“I grew up in a very Christian family and Christian home,” she said, “and the good thing about coming to Montreal is I’m asking all these things about my identity and it is coinciding with the music.”

“If I was back home, they would probably call me deviant because of how I am portraying myself,” she said.

Through the ambient fog of the venue, local artists, and music lovers alike gathered to listen to the diversity of sounds that the Hot Tramp festival offered that night. 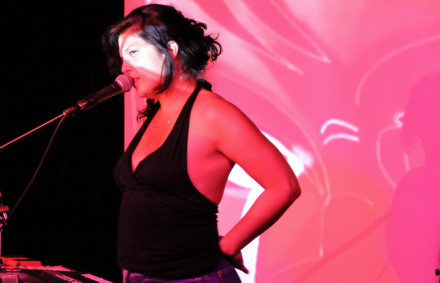 Lining the walls were Hot Tramp illustrations of Armiento with striking red lips, dark trimmed locks, and an iconic beauty mark near the corner of her left eye.

Armiento had dabbled in management, helping her friends with their artistic endeavours. After receiving a grant, she finally decided to put a name on it, one that was femme-focused and that encompassed her fast-growing, tightly-knit roster.

“The festival world has been dominated by dude bands for so long, and over the past year, there are spaces being created for femme artists and I just kind of got that energy and picked up on that momentum,” said Armiento.

She added that there will be a second edition of Hot Tramp festival.