The Concordia Stingers women’s hockey team had all the reasons to come into Friday’s game with a lot of confidence.

The Concordia Stingers women’s hockey team had all the reasons to come into Friday’s game with a lot of confidence.

The squad was ranked number one in the country for a fifth week in a row and were taking on a Carleton Ravens team which stood at the bottom of the Réseau du Sport Étudiant du Québec standings.

The matchup against the lowly Ravens was the perfect opportunity for head coach Julie Chu to start sophomore goalie Madison Oakes in her first-ever U Sports regular season game.

“We have a good goaltender group,” said Chu. “It’s time to have a little bit of experience for other goaltenders too. It’s just a good thing for us to do. Maddy deserved the start.”

It didn’t take too long for the Stingers to set the pace in this one. Their signature high tempo pressure was at full steam, pinning down the Ravens in their defensive zone. They spent most of the first period challenging Carleton’s young starter Marie-Ève Côté.

The young netminder had no care for the Stingers efforts, denying the RSEQ co-leaders, Audrey Belzile and Rosalie Bégin-Cyr, in points on multiple attempts in the first frame. She stoned some of the Stingers best shooters during the lone power play attempt of the first.

Côté’s work in the first period was the sole reason the Ravens were still in the game. But the rookie’s masterclass was far from over. She managed to fight through the incessant waves of Stingers’ rush in the second to keep her shutout, and her team, alive after the second period.

“She made some tremendous saves,” said Chu. “Honestly, it’s just about finding a way to figure out a goaltender.”

After standing tall against Bégin-Cyr and Emmy Fecteau with some amazing saves in the first half of the third, the rookie goaltender began to show signs of weakness. She was first beaten on a deflection by Claudia Dubois. The goal energized the home side as fans gathered at Ed Meagher arena.

The Stingers didn’t waste any time making the most out of the energy surge from Dubois’ goal, as rookie Emmy Fecteau extended the home side’s lead less than 20 seconds later.

With only six minutes left in the game following Fecteau’s tally, it was hard to imagine the best team in the country collapsing against the worst team in the league. But the Ravens and Côté had other plans for the Stingers.

“She made some tremendous saves,” said Chu. “Honestly, it’s just about finding a way to figure out a goaltender.” Julie Chu

The home side was handed a golden opportunity to put this one away less than 30 seconds later when they were awarded a five-on-three power play. Despite getting a lot of pucks on net, Concordia was not able to take advantage of this incredible opportunity.

“I didn’t think our three-on-five [power play] was great,” said Chu. “We weren’t moving the puck. We took our time with it. We have to be better there.”

As fate would have it, the power play turned out to be beneficial for the Ravens as sophomore Megan Wilson was able to escape on a breakaway sliding the puck between Oakes’ pads. Wilson’s effort revived the Ravens chances late in the game cutting down the Stingers lead in half.

With a last ditch effort, the Ravens were able to establish their offense in the Stingers zone, eventually setting up a crucial face-off to the right of Oakes. Following a Carleton timeout, the Ravens’ forwards crashed the net, eventually knocking a loose puck directly behind Oakes. This gave Wilson her second of the game while sending her bench into a frenzy.

“[During the Carlton’s timeout] We talked about you rotate on a five-on-six,” said Chu. “You’ve got to be able to adjust and react to what you see. Unfortunately, we didn’t do a very good job on it.” 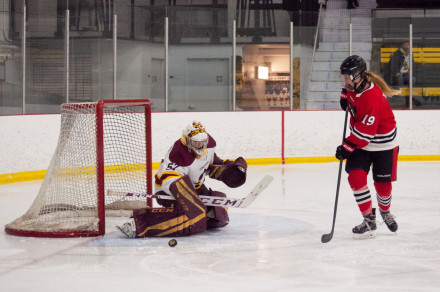 Concordia goaltender Madison Oakes gets first start of the season.

The 2-2 tie made it through the two overtime periods despite the Stingers completely dominating their adversaries. But Côté was on a mission and was not going to let her team down.

The rookie goaltender got to finish the job herself in the shootouts shutting down Fecteau on sprawling right-pad save followed by another save against the captain Dubois.

“Both Emmy and Claudia had her beat,” said Chu. “They just had to go upstairs. But couldn’t quite get it there, even though they had the time and space to do it.”

Côté simply had to watch as Wilson served Oakes the same deke she had completed earlier on a breakaway to put the Ravens up one in the shootouts. Carleton’s veteran defender, Jordan Beshera finished the job on a superb move to complete the comeback and upset.

Concordia will undoubtedly look to learn from this loss. But they’ll need to assess things pretty quickly as they’ll be back out on the ice Sunday afternoon when they visit the McGill Martlets at McConnell Arena.

Puck drop is at 3 p.m. This promises to be another tight affair, as the first two matchups between the two squads this season ended in overtime. The Martlets will also look to avenge a loss they suffered against the Ottawa Gee-Gees on Friday night.