‘You’re Tearing Me Apart Tommy’: A First Person View of Montreal’s Screening of ‘The Room’

It’s rare and unexpected to see a group of people get so much joy from something so unabashedly terrible. But that’s what happens at Cinema du Parc every few weeks with screenings of Tommy Wiseau’s The Room .

For those uninitiated to the wonderful mess that is The Room, it’s a 2003 movie (a loose use of the word) written, directed, produced, and starring Tommy Wiseau, a man who, along with his oddities, has become as much of a cult classic as his work.

It’s been called one of the worst movies ever made, been the subject of books, papers, online videos, and even an Oscar nominated film. It’s become a worldwide phenomenon, sparking public screenings, often attended by the actors or Wiseau himself. Montreal has its own version of this that often fills the Cinema du Parc.

To get the full scope of the experience, we thought we’d send both an avid viewer of The Room (Dustin) and a fresh set of eyes that have yet to be tainted/blessed by Wiseau’s brainchild (Victoria).

Victoria: Going to see The Room for the first time on May 29 felt like a homecoming. The tale starts last year; it was a slow afternoon in The Link’s office. I procrastinated by googling the name of my grandfather, a man of whom I knew nothing.

To my surprise, I read the same question, article after article: Who is Manuel Lamas?

It turned out, at the end of the 80s, he wrote and directed a movie, Acto de violencia en una joven periodista that was released on VHS. It was so bad, on all accounts, that it garnered a cult-following in my father’s country. I learned then that I was in the lineage of a Uruguayan cultural figure. 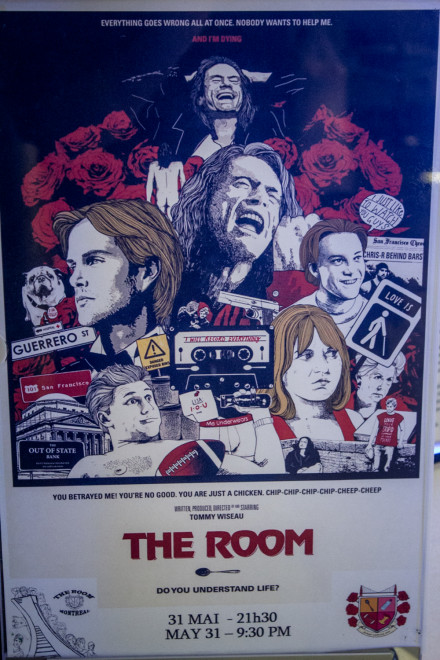 Upholding my legacy, I walked into the Cinema du Parc feeling at peace, ready to take this assignment by the spoons (more on those later). I’m the heiress of bad movies, after all.

Dustin: The first time I saw The Room was six or seven years ago. It took me about halfway into my first runthrough to really understand it wasn’t some kind of ironic statement, that someone could make something so far from normal human behaviour and emotion in every single aspect.

From dialogue that sounds like it was written by an alien who had met humans a few times back in his twenties (“keep your stupid comments in your pocket” is a personal favourite), to a shoestring plotline, to characters and storylines that disappear entirely, it’s a complete mess.

I went on to watch it every chance I got before attending the public screenings four times.

It’s an amazing group experience. Everyone seems to know the movie by heart, shouting lines, mocking characters, and offering them advice. Perhaps the best part are the Rocky Horror-esque traditions and reactions that come with it all

V: The experience was, as expected, life changing. Like the movie, I can’t recall my thoughts in any logical order; my memories come in flashes.

Every time a framed picture of a spoon was in the shot during the movie, attendees threw plastic spoons in the air. A The Room enthusiast next to us, who came more prepared than us, used all of his 400.

It was my favourite part, the one that kept me awake. The dynamic, immersive ‘‘Where’s the Spoon?’’ kept me going and left me changed forever. I might just start carrying plastic spoons, just in case I see one in the wild.

D: as you attend more of the screenings, you learn how to participate in these traditions more and more. It gets even better when you know right when Wiseau will look to the bottom right hand corner of the screen and wave at nothing so a small crowd will gather at the screen to wave back.

It’s also a good time to see people imitate a brutally awkward scene of four men playing football in tuxedos three feet apart, for no apparent reason. The reenactment comes with chases, tackling, and cheers from the entire theatre every time. It’s not hard to elicit cheers when you’re avoiding the urge to groan at the odd performances and random scenes Wiseau has put in front of you.

V: Wiseau’s directing is reminiscent of a high school music ensemble, where the percussionist clearly has a unique idea as to what the rhythm should be. What ensues is an odd, physically uncomfortable pace that, in The Room’s case, lasted over an hour and a half. 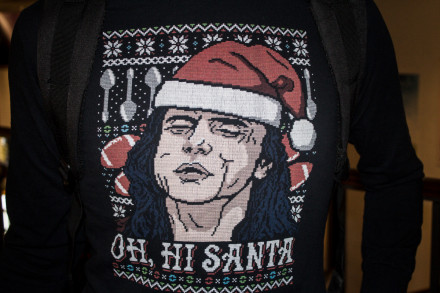 For example, in another fantastic scene, Lisa (the “future wife” of Wiseau’s lead character Johnny) was unpacking her groceries. The mechanical acting—she uttered a line per object she pulled from the bag—inspired me to live to my own beat, too, because Wiseau doesn’t seem to think acting like an organic human being is appropriate.

D: Honestly, an article just listing the worst elements of the movie (the overlong sex scene that saps the sexuality right out of your body being copy pasted twice into different parts of the movie comes to mind) and the odd traditions could fill plenty of pages. But what it boils down to, and the reason I keep on going back to these screenings, is that sharing the fun in something as brutal as this movie with a group of people is its own unique kind of experience. Laughing and yelling at this bizarre movie with a room full of people is just really fun.

V: I left the Cinéma du Parc, if not rested, transformed. Evidently not a rookie, Dustin participated in the stunts with other seasoned The Room-goers. Near the end of the movie, a close-up of Wiseau appeared on the screen. He slowly looked to his left and smiled, his gaze stopping directly on the crowd of 15 people or so waiting and cheering at the bottom of the screen.

The lesson is, Tommy Wiseau sees you. He’ll always be there for you.