What Is Hockey to Me: Being a Person of Colour in Hockey.

Hockey Has Been The Sport I Love Since I Was a Kid, But Sometimes It Doesn’t Love Me Back

My life started off just like many other young boys: I was obsessed with cartoons and toy cars.

I had no interest in any sport at the time—it was just something I’d do in gym class.

Growing up with immigrant parents, life wasn’t always easy. As a family, we always had our struggles financially, but that never stopped my parents from giving me every opportunity to succeed.

My life forever changed when my mom came to me one day and asked me if I wanted to play hockey. At this point, I was seven and had already played a year of soccer, having only seen hockey on television when my dad would watch it.

I thought why not try it out and see how it goes. Leading up to the first day I would ever play hockey, having never skated in my life, I was nervous yet really excited.

To this day, I still remember that first time on the ice, with my parents in the room with me, helping me get my equipment on and holding my hand until I got on the ice.

When I took that first step, I realized this was going to be the hardest thing I’ve ever done in my life, and it was.

My first year of hockey wasn’t that great. When I was on the ice, I struggled a lot. My parents knew I would. Seven-year-old me was fed up with not being able to score and not being as good as the other kids.

I wanted to quit.

When registration was opening up for the next season, I told my Mom that I didn’t want to play. She told me that it was not just going to come easy, and I might regret it down the line. So, she signed me up, and I was ready for my second season, hoping it would go better than the last.

I would spend hours in my basement alone, shooting pucks, tennis balls, and even rolls of tape to get better. A sport I almost quit became the only thing I knew, my life’s passion. 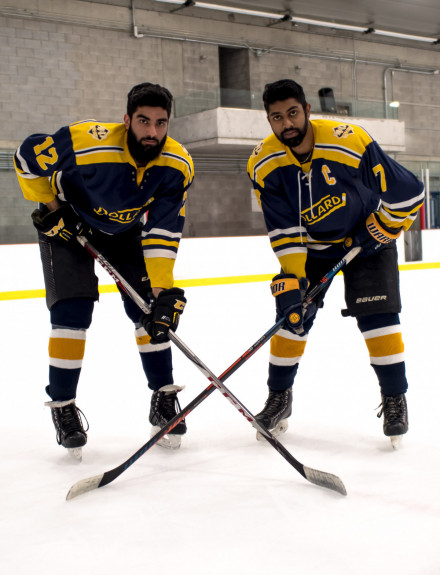 Saravanamuthu alongside teammate Jaskaran “Jassy” Aujla. Neither are strangers to racist comments on and off the ice. Photo Esteban Cuevas

As the years went by, I was catching up to the other kids and I could feel myself getting better and better. It was only at the age of 11 when I had my first good season. It was also the first year I was named captain.

Being captain of your hockey team is a special feeling and an added responsibility that most players in any sport hope to have.

Although I was only 11, I took that role seriously and I wanted to make sure I was the best captain I could be. Since it was my first time, I needed to learn to be a proper leader.

I can thank my teachers, coaches, family, friends, and idols such as Daniel Alfredsson for showing me the way, not just in hockey, but in life.

At this point, the dream of becoming a player in the National Hockey League was far from gone, but I still wanted to get better each and every day at the sport that changed my life.

I still get on the ice with that same passion and wake up excited knowing that I’ll be getting on the ice for a practice or a game, and I hope that never goes away.

Being a player of colour comes with its challenges, often being questioned about if I even play hockey regardless of what I say, or people assuming I only play cricket.
—Janushan Saravanamuthu

As I progressed through hockey, there was not much chirping on the ice, and you avoided hearing many things that should not have been said. But as I got older, I first heard the racist comments.

The first time it happened I was a bit shocked, but I always expected it at some point. You tell your coaches, but there’s not much they can really do.

The team supports you through these situations, but there isn’t much anybody can do about it.

My teammates would tell me just to ignore it and not let it bother me, but they would then go on to say a few words themselves to the individual who made these comments to have my back.

It was hard to skate away at times because you knew these things shouldn’t be said—not on the ice, not anywhere.

Although these experiences were frustrating and still happen to this day to me and my fellow teammates of colour, it’s something you use to motivate yourself to be the better person and just ignore the individuals with those awful words.

Most of it has been on the ice through the opponents I have faced over the years, usually against rival teams where tensions rise and they feel obligated to say such things. 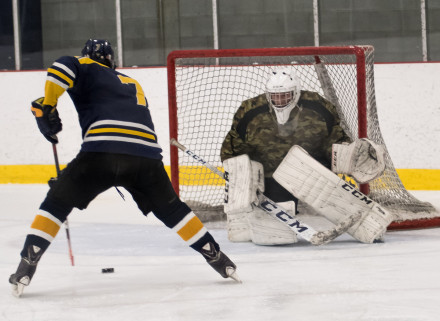 “I would spend hours in my basement alone, shooting pucks, tennis balls, and even rolls of tape to get better.” Photo Esteban Cuevas

These experiences have made me stronger and taught me to dismiss a lot of the ignorance that comes my way. Being a player of colour comes with its challenges, often being questioned about if I even play hockey regardless of what I say, or people assuming I only play cricket, and it gets frustrating, but you do get used to it.

It’s discouraging that it has happened so much to the point where it becomes normal, and you can’t do anything about it but walk away and not acknowledge that individual. You just fight through it and learn to take the high road.

This year will be my last playing hockey for the Dollard-des-Ormeaux Junior B Civics, where it all started, and I have had the honour of ending it as captain and having my friends and coaches who’ve been there with me throughout the years. It is sad to see that chapter of my life end, but it won’t be the last time I lace up the skates with my boys.

Hockey did not only teach me about having to work hard to get to where I am today, but it has also taught me to be humble and become a better person. It has given me an out on many of my worst days.

If I am ever upset or feeling down, just picking up a stick and stepping onto the ice distracts me from everything else going on around me, and I feel at home.