It came down to one final drive. A thrilling game that saw top-seeded Université de Montréal escape CEPSUM with a nail biting win over the last place Concordia Stingers on Friday night and made one thing clear: The new Stingers are here.

Unfazed by the loud horns and chants of the home side, the Stingers walked into the game with something to prove.

They took the field and battled toe-to-toe—for a second time— against the best team in the league, nearly stunning the Carabins for the first time in nine years.

Both teams started the game unable to build good rhythm, as defence made all the difference.

It was only at the 6:28 mark that Université de Montréal quarterback Dimitri Morand got his team threatening to score for the first time with a 22 yard run to Concordia’s 35 yard line.

As this drive ended in a missed field goal for the Carabins, Concordia took over and the lethal combination between quarterback Vance and wide receiver James Tyrrell began to click.

The duo connected on two consecutive possessions for 16 yards, with Concordia answering right back and building momentum of their own towards the end of the first quarter.

This would be the story of the night. The New Stingers matched every blow the Carabins delivered, which left receivers coach Seydou Junior Haidara appreciating his team’s growth after the game.

“They kept competing, they kept believing [..] yes we came out of this one with a loss but I think it’s a good teaching moment, we played two tight games, they’re reacting very well in those situations,” he said.

The league leading Carabins were first to put points on the board in the second quarter, during a six play drive that included a pass interference penalty and an unreal over the shoulder catch from Kevin Kaya on Concordia’s 36 yard line.

Though the drive ended in a field goal to put the home side up 3-0, from that moment, Morand found his target of the night, as Kaya finished the game with 117 yards and a touchdown.

Stinger quarterback Vance was equally up to the task. On the following drive, at the 6:10 mark, he launched a 50 yard bomb to James Tyrrell, who finished with a game high 174 receiving yards.

Vance did not shy away from expressing his thoughts about Tyrrell’s value to the team and this league.

“No doubt the best skill position player in the country. He knows how to get it done and he’s a trooper, that’s for sure,” he said.

“Vance and I have connection of the field [..] It’s just like a natural thing we’ve built over the past two-three years,” —James Tyrrell

After Concordia successfully tied the game up at three with just five minutes remaining in the half, Carabins’ kicker Louis-Phillipe Simoneau made two straight field goals giving his team a 9-3 heading into the locker rooms.

A poised, determined, and hungry Stinger side silenced the crowd in the third quarter. From their own 45 yard line, Concordia marched down the field and scored a touchdown, taking a shocking 10-9 lead.

On that drive, Vance and Tyrrell combined for 45 yards with four consecutive receptions, finishing it off with a 20 yard score from Jeremy Murphy. Tyrrell explained his performance was a reflection of his relationship with Vance outside football.

“Vance and I have connection of the field [..] It’s just like a natural thing we’ve built over the past two-three years,” he said.

Momentum shifted. It began to feel like the Stingers could pull off the upset. But the lead did not last long as Université de Montréal earned a point off a missed field goal and then made one to go up 13-10 at the beginning of the fourth. 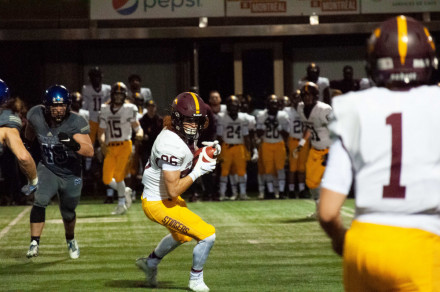 After les Carabins had increased their lead to 20-10 at the 9:04 mark capitalizing on a costly unnecessary roughness penalty that led to a huge touchdown catch from Kaya, the Stingers needed a score. They got just that.

A thriller from beginning to end, the game was a fight nobody but Collinson’s new-look Stingers expected. The Carabins’ lead, now narrowed down to three thanks to a touchdown by Marshall Mather, kept fans on edge.

Despite Concordia’s game tying field goal attempt at 2:46 of the fourth being blocked, it boiled down to a final drive.

With 59 seconds left, the Stingers had a chance to shock the stadium. As emotions were running high, the pressure was on.

Vance knew who he was going to, but the Carabins defence stepped up and deflected the pass intended to Tyrrell on third down on Concordia’s 54 yard line that would’ve given them one more shot.

At the end of the game, Vance had motivating words for his team.

“It was a tough one, our guys battled. They battled real good. All 60 minutes of the game, they didn’t back down, they weren’t intimidated at all. They did their job and we’ll get in the film room and we’ll figure it out.”

Concordia will travel to the Telus Stadium in Laval to face the Rouge et Or on Sunday, Oct. 6, where they’ll look to bring the same momentum from Friday’s riveting game.