The Leanover, Schwey, and Jaunt play for the Tavern Tour

“All three bands tonight sound like they could be dance moves,” joked Ali Overing, singer and songwriter of Montreal-based band The Leanover, before taking off into the tail end of an energetic, head-bang inducing set.

Followed by Schwey and Jaunt, The Leanover was the first of three bands to bring their energy to the Diving Bell Social Club’s stage on Jan. 30 as part of the Tavern Tour.

The Leanover’s music is the ideal soundtrack for an introspective walk, said Overing. The band’s music encourages pensiveness, but wouldn’t drive you further into despair.

For Overing, songwriting is like journaling. “The act of writing really helps me parse what I’m thinking and actually get to the roots of what’s going on in my various crises,” she said.

Inspired by natural metaphor, science, physics, and Björk, Overing said The Leanover attempts to tackle the big questions that daunt society as a whole.

“Our last album, we were thinking a lot about enclosed spaces and being stuck; this weird need for a domestic life, but also [the] need to carve a bigger space in the world,” said Overing.

In a burnt orange satin dress shirt and suit (thrifted), Overing’s vocal intensity and tireless presence exemplified this, carving their way into the space’s growing audience. 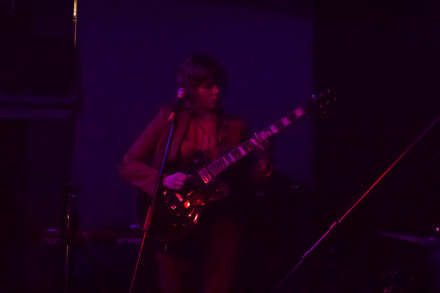 Armed with bongos, a red synth, tambourines, and a chaotic, groovy vibe, Schwey took to the stage next. Drowning themselves in the pink and blue glow of the lights, young and hip spectators moved feet and body, twisting and boogieing in all types of ways to the funky rhythms and beats.

The quintet describe themselves as a “collective of musical souls lost in the cosmos that gather to synchronize wavelengths.”

The group, who explained they came together by fusion thanks to the Sun, describes their music as cyber-soul. “The perfect combination between nature’s gift of music and human’s gift of music,” explained Jarah Terrell-Dobbs.

Currently based in Montreal, Schwey is trying to play in Eastern Canada as much as possible.

“[We’re] trying to […] make waves, play shows, record [and] be authentic,” said Jacob Schwinghammer, who claims his last name is consciously unrelated but perhaps subconsciously associated with the band’s name.

“In Toronto […] we have a decent little audience. You can tell they are developing relationships with the music, and that definitely creates [an] energy exchange,” explained Thomas Helliwell, core songwriter and idea man.

Helliwell described their sound as “pop music in the most traditional sense but sort of abstracted through a few layers of reinterpretation.”

He explained the six members, each immersed in their separate little music worlds and solo projects, bring different ideas and inspirations to the project.

“Through our mix of influences […] we take those classic ideas and bring them into a kind of zany, modern realm,” he explained.

Daniel Reardon explained that the band is equally sensitive to visual inspiration. Jaunt uses colour palettes from their natural surroundings to set the tone and emotions of each album.

“That visual conversation and searching is always happening. From the very beginnings of the song, there’s kind of this coupling of both art [forms] being born together at the same time,” said Reardon.

In the coming months, Jaunt will be putting out lots of music and touring their new record, said Helliwell. If you missed them this time around, they’re planning on returning to Montreal in the spring.