The artworks were sparsely laid out on the open floor, exhibiting the work of three artists—Roxanne Boyle, Olivia Turchyniak, and Bin Han—as opposed to the average of seven to eight.

The installation of the Visual Arts Visuels Gallery’s exhibition No.02 was done in one day.

Originally from Vancouver, Boyle was fascinated by Montreal’s metro system and wanted to document it through photography.

“I wanted to represent the people that take the metro, which is pretty much everyone, but not through people, through the objects they left behind—the leftovers is what I call them,” said Boyle. 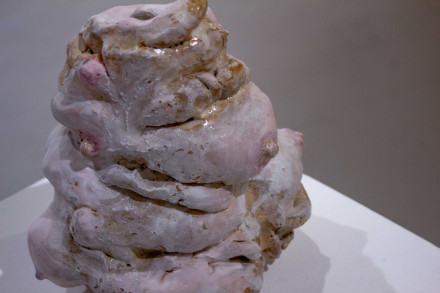 Olivia Turchyniak presented her piece made of stoneware depicting the body as a vessel. Photo Nanor Froundjian

The series includes pictures of lost objects, garbage, and even vomit. Accumulating the images took three months, and it all began with a picture of a dime left on the blue seats of the metro.

Boyle made a habit of staying on the metro until the late hours of the night to find and capture all the elements to complete her series.

“I like the final product, but the process was even more enjoyable for me,” she said.

She had draped plaster bandages over her friends’ faces and waited for the material to harden. Each mask mimicked the shapes and curves of each person’s face. Boyle then used approximately six photographs of each face to cover the area of the mask.

“I took pictures in different rooms, so it was either daylight or fluorescent lighting and that changed the skin tones,” she explained.

“I wanted to represent the people that take the metro, which is pretty much everyone, but not through people, through the objects they left behind—the leftovers is what I call them.” — Roxanne Boyle

It delivered a “surreal, grotesque, very life-like image,” as she described it.

The multimedia project extended to moulding different parts of the body, too. A woman’s chest and behind were displayed separately as part of the installation.

The wall opposite the faces had two hands, cut off at the wrists, sticking out as though reaching for something, and one foot.

Turchyniak exhibited a collection of ceramics.

“I’ve always seen vessels as symbolism for the human body and how the body is what holds our soul and the duality of inner versus outer in humans,” she said.
Turchyniak described a vessel as any open object that has a void.

She worked with stoneware to sculpt the deformed bodies and used a satin matte white glaze, adding a light touch of lipstick to certain areas.
“As a woman, I wanted to represent feminine body parts and through repetition put our attention towards the private parts of the body and try to make them look more seducing,” she said.

Turchyniak experimented with scale by creating the woman’s torso and chest in different sizes. Each piece was displayed on its own white elevated platform.

“I wanted to combine my love of building vessels and my love of bodies in moulding the two into one and kind of creating an object that is grotesque but simultaneously attractive,” she said. 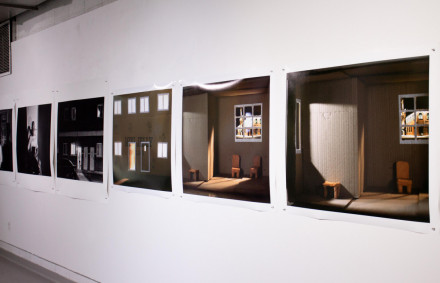 Grotesque, in this case, was the unusual and strange repetition of the body.

Jacqueline Beaumont, technical coordinator at the VAV, explained that the gallery will continue exhibiting a small number of artists for the rest of the year and see how it goes.

“We’re trying to go back to our roots,” said Beaumont. She explained that the VAV originally showcased two to three artists per show at its inception, but later began including a larger number to give exposure to more students.

“I think that this will be able to create a stronger feeling of an artist showing in a gallery rather than just work which is how it has been in the VAV Gallery in the past couple of years,” said Beaumont.