Brothers Recount Their Path to Professional Lacrosse, Obstacles Faced Along the Way

Brothers Jeremy, Jerome, Miles, and Lyle Thompson from the Onondaga Iroquois Nation in upstate New York were quite literally born with lacrosse sticks in their hands, receiving traditional wooden sticks at birth.

Lacrosse, referred to in many Indigenous cultures as the Creator’s Game, represents a deep rooted tradition and family for the brothers.

As part of First Voices Week at Concordia, three of the four brothers—Jeremy, Jerome, and Miles–spoke on a panel to a crowd of sports fans, athletes, and lacrosse players young and old, telling stories of their personal journeys and how they achieved their dream of playing the game professionally.

“[Lacrosse] is a part of our culture, a part of our medicine. For me and the way I took that, I took it right from the original story,” said Jeremy. “It starts out with different animals that bring a different perspective to the game of lacrosse. Its shown me throughout my career I was different, because everyone has a specialty when it comes to their gifts, and it’s up to you to find that within yourself.”

For Jeremy, the path to playing lacrosse professionally nearly ended early. During the panel, the eldest Thompson opened up about his struggles with substance abuse as a teenager.

“I came to my parents at a point where I’d just had enough, and where I told my dad I was suicidal and I really didn’t know where I was and just didn’t feel like I had a great value to what I was doing at the time,” he said.

As he reached his breaking point, Jeremy turned to his father Jerome Senior for guidance. 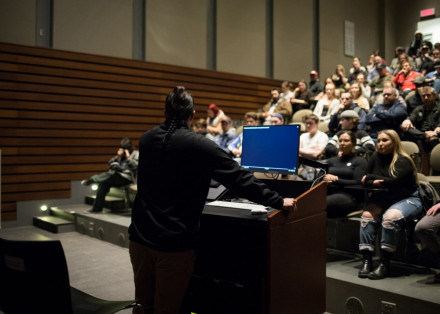 People of all ages and backgrounds gathered to hear the brothers tell the stories of their personal journeys to becoming professional lacrosse players. Photo Maggie McCutcheon

“He took my hand and took me out to this nearby creek,” Jeremy continued “We sat down there, and he said, ‘Son, what do you see?’ And I didn’t know what he meant. We sat there and he let me be, and let me feel out the place.”

In the Onondaga culture, it’s tradition to give thanks to the water, the winds, the birds and the trees. Jeremy said nothing is a coincidence in terms of how his situation turned out, and how he overcame it. He gives credit to lacrosse and knowing the history behind it, describing the importance of the tradition behind it; things like the renewal medicine game, which takes place once a year to bring the community together and create protection for its people and lacrosse players entering a new season.

He says he’s appreciative, thankful, and recognizes the importance of acknowledging the values of his culture, the same values his parents emphasized.

From there, Jeremy set his sights on making a career out of playing lacrosse, starting off at Lafayette high school in Buffalo, New York. He and younger brother Jerome were flooded with offers from NCAA Division One schools across the country, but the brothers opted instead to start off at Onondaga Community College.

Jeremy and Jerome wanted the NCAA life, and had their sights set on Syracuse University, but only Jeremy made the cut.

Jerome entered the National Lacrosse League draft in 2011, where he was drafted 25th overall by the Buffalo Bandits. Discouraged by being passed over by Syracuse, he’d gotten out of shape and would not crack the roster until 2015. Through it all though, he was perseverant.

“I had a talk with my younger brother [Miles], and I got into the best shape of my life, because I knew I wanted that goal [of playing professional lacrosse] and I wasn’t going to give up,” said Jerome. “I pushed myself, and I ended up getting a call back from Buffalo, and it was the best feeling in the world, knowing how much work I’d put in throughout my whole life.”

He emphasized the importance of pushing oneself to achieve their goals, because of the feeling gained from achieving the goal after putting in so much work—an important message for a room full of young athletes.

Miles, however, didn’t go the route of his older brothers, making it to Division One University of Albany right out of high school.

Now, all four brothers are playing professionally in the NLL. Jeremy currently plays with the Saskatchewan Rush, while his three younger brothers play with the Georgia Swarm.

“I’ve asked and they won’t let me go there,” Jeremy laughed. 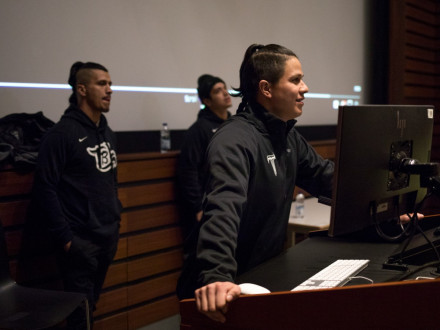 Their journeys were not made without obstacles. Each brother told stories of tough times along the way, including substance abuse, rejection, and racist remarks. Photo Maggie McCutcheon

In January, youngest brother Lyle was the subject of a racist remark made by a Philadelphia Wings in-arena host, who said, “Let’s snip the ponytail.” Some people in the stands yelled about scalping him.

“When that happened, I was pretty upset,” said Jerome. “When I’m upset I usually react the way I’m not supposed to, but I thought of my great-grandfather and the way I approach it now is to educate. That guy probably doesn’t know where we come from, he doesn’t know what our hair means to us.”

To them, and Miles in particular, their ponytail is a way for them to represent their culture both on and off the field. All four boys were given the opportunity to cut their hair when they turned 18, and all four have chosen to keep their ponytails.

Despite the hurt resulting from this incident, and similar incidents happening to Jeremy recently, the brothers try to remain positive.

“It definitely couldn’t have happened to a better person, which is my brother Lyle. He’s turned into probably one of the strongest human beings that I know. It hurt him that night, and it kind of helped him at the same time because now look at what it has done, a lot of people, even the Wings organization have made a big deal out of it.”

Now, the NLL has made a push to educate fans as a result of the incident, making sure to place importance on where the game comes from and what it means to Indigenous peoples.

The brothers do the same, acknowledging the importance of having someone to pass on knowledge of the Creator’s Game to a new generation of players. In partnering with Nike N7 to put on lacrosse clinics for kids they’re able to do just that. The N7 camps are run exclusively for Indigenous youth, in order to keep the game and its story and traditions alive.

The camp offers kids the opportunity to train with the brothers, considered some of lacrosse’s best and brightest. They’ll run drills and learn where the sport they loves comes from, and what it means to so many Indigenous cultures. Traditionally, Indigenous culture is passed down orally from generation to generation, lacrosse included, and this camp is an example of how the Thompson Brothers are contributing to the next generation.