This Week in Protests

March 7 and 8 were busy days for protesters, as the causes of tuition, police brutality, and women’s rights were all represented in four different events within 24 hours. Some of the demonstrations, however, were marred by violence.

The skirmishes kicked off when an impromptu and lively student protest against tuition hikes worked its way through Montreal’s busy downtown streets March 7—an event that would end with one student in the hospital, having permanently lost his right eye.

The protest started at Square Victoria where urban studies students from the Université du Québec à Montréal wrapped trees and other objects in the park in red fabric, a symbol of the student movement against tuition increases.

The confrontation began when students attempted to block the entrance of the Loto-Québec building, which also holds the offices for the Conference of Rectors and Principals of Quebec Universities. CREPUQ’s offices were being protested due to the organization’s support for the government’s tuition hikes.

Riot police quickly stepped in and removed the students.

“We were peacefully blocking the CREPUQ building. The police decided to clear up Sherbrooke St. with a violence hard to describe,” said Nadeau-Dubois.

“It was really peaceful, except for when we were at Loto-Québec when the police set off flash-bombs,” said Noémie Roy-Gibeault, a student at the protest.

Riot cops used tear gas to disperse the students, four of whom were injured, as well as one police officer.

The Coalition large de l’ASSÉ, an umbrella union that represents over 80,000 students, issued a statement reporting that CEGEP Saint-Jérôme student Francis Grenier had been hit by a stun grenade in the eye from point blank range and had to be rushed to the hospital.

On March 11, it was announced that Grenier would lose vision in that eye permanently. Nadeau-Dubois condemned the incident.

“For the second time in two weeks, the police violently repressed a student protest. The police have to respect the students’ right to demonstrate.”

After leaving the Loto-Québec building, around 600 students marched haphazardly through downtown with the police following behind.

“Going from Square-Victoria to Loto-Québec, I’m pretty sure, was probably planned, but the rest of it was improvised,” said protester Jean-Luc Wyman-Grimard. “There was no real target; basically just moving around and students deciding together that they want to act.”

After stopping for a few minutes in front of the Education Minister’s office, the students came back to Place-des-Arts Metro and dispersed onto separate metro cars.
Later that night, riot cops near Berri-UQAM forcefully broke up a vigil for Grenier.

“The [riot police] arrived and started shoving everybody,” said a student protester who asked to be identified only as Max. He claimed there was no warning issued prior to the violence.

The SPVM said that two people were arrested at the vigil. 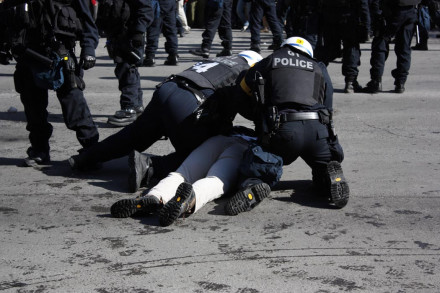 The next day, a follow-up vigil took to the streets along with protesters gathered for International Women’s Day, anti-police brutality and Israeli Apartheid Week demonstrations—not to mention students demonstrating against tuition hikes.

“We combined the two together to support people that aren’t able to go to university.”

The unplanned protest worked its way peacefully from Concordia University to Berri-UQAM Metro station and into the east end of the city.

Protesters marched under the Jacques Cartier Bridge and went to the Hydro-Québec building that students had marched to the day before. A pile of roses was laid at the feet of police lined up at the entrance of the building before the group headed back toward downtown.

Later that night, another International Women’s Day demonstration collided with several other protests all taking place in downtown Montreal.

The march left the Simone de Beauvoir Institute at 2:00 p.m., and was joined by another group of demonstrators by 6:00 p.m. at Norman Bethune Square in Concordia’s downtown Sir George Williams campus.

A crowd mostly made up of women took a stand for women’s rights around the world despite the heavy rainfall, and joined up with hundreds of other protesters and marched down Ste. Catherine St. W.

“This International Women’s Day, we recognize the struggles of Palestinian women in their fight against an entrenched system of discrimination and segregation,” said Freda Guttman of Montreal-based diaspora activist collective Tadamon.

Because of the recent amount of strike activity over the last few days, and the violent clash between riot police and students the previous day, an atmosphere of tension hung in the air. The protest was surrounded at all times by riot police on horseback, accompanied by police in cars, on bicycles and on foot.

A helicopter hung in the sky carefully watching the progression of the protesters making their way to Philips Square at Union St. and Ste. Catherine St. W.

The protesters continued to block traffic while speakers from each group cheered their reasons for participating in the march.

“Whatever the weather forecast might attest, it is always a beautiful day to smash patriarchy, capitalism and oppression,” said Amy Darwish from the Immigrant Workers Centre.

As Concordia begins its strike, expect more of the same in the next few weeks.