The Temperance Movement Moseys Over to Montreal

All the Way from Scotland, Hard Rock Band is Humbled to Take the Stage in our Fine City

On an early Thursday Afternoon, five dudes haul their gear up the stairs of Café Campus. They unload each piece of equipment from their van into a deserted room where they’ll perform later that evening.

“It’s great in here—what a lovely stage!” shouted Phil Campbell, the lead singer of The Temperance Movement. He wore a mix of dark colours that exerted vibrant and warm gestures to everyone in the room, including the manager and lighting technician.

He quickly glanced back at the stage as he took his seat, seemingly fixated. “I’m pleased to be here in Montréal. That is a lovely stage. I can’t wait to play on it tonight,” he said smoothly grinning, with a strong Scottish accent.

The Temperance Movement is currently on tour in support for their second studio record White Bear, which Fantasy Records released at the beginning of this year. The album is full of groovy guitar riffs that encapsulate the raw emotion of fun. Only three weeks into the tour, they said it’s already been one of their best runs yet.

“Since October of last year, [the band] took on a new guitar player [Matt White]—and the band dynamic shifted,” Campbell said. “The last Canadian tour was great. We’re beginning to feel confident playing together, and so far this tour has been great.”

His eyes continued to dart around the room. Meanwhile, the rest of the band busily unpacked and made coffee runs for what would be a long day of rehearsing and sound testing. 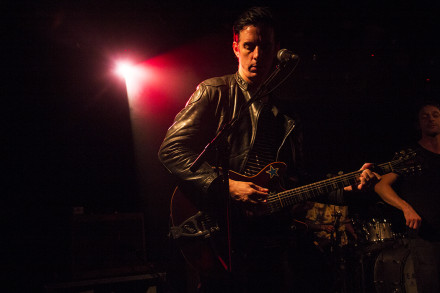 It was a sight to watch Campbell feel out the room. Located in the lower part of Montreal’s Plateau neighbourhood, Café Campus was not the most famous the Scottish group played at. The Temperance Movement has performed in much grander venues, and on more unique stages, around the world, especially in the U.S.

“The 9:30 Club in Washington D.C. was a great gig,” said bassist, Nick Fyffe. “It was a weekend show, which always makes a difference. If you play on a Monday or Tuesday night, people have to go to work the next day—people don’t let themselves get loose as much.”

A show at the Brooklyn Bowl was another highlight, namely because their set got people to stop doing what the club’s name suggests.

“The Brooklyn Bowl is quite a cool venue—you’re standing on stage but to the left of you are bowling lanes,” Fyffe explained, laughing. “When we got on stage people stopped bowling—that’s a good sign.”

“When we got on stage people stopped bowling—that’s a good sign.“— Nick Fyffe, bassist

Campbell went on to say that they’ve enjoyed all of the venues that they’ve played at so far. The 9:30 Club stood out for them because of how notorious the club is for jump-starting the careers of acts such as Minor Threat and Fugazi. Some stand out acts that had early performances there include the Ramones, Bad Brains and Violent Femmes.
As members of the band attached fresh new strings to their guitars, Campbell said despite Montreal having a prominent music scene, their set brings something familiar yet different. They evoke those 60’s and 70’s vibes.

“We’re sending out an energy during our live shows for those who still believe in the magic and wonder of Tina Turner, Creedence Clearwater Revival and Jimi Hendrix,” he said. “We do it through this medium of growly guitar amps and these different styles, but we’re a rock and roll band and we’ve built our name on the playing of rock and roll.” 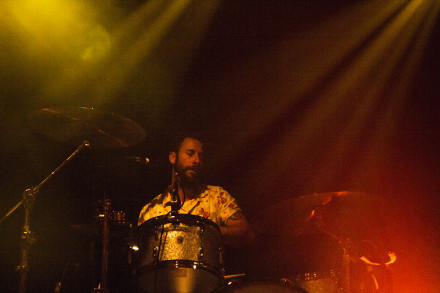 Throughout their warm-up, Campbell and the rest of the band glowed with a genuine energy. The manager and other associate all laughed in the background as they conversed over coffee and tuned their instruments. They’re influenced by the legends like ACDC or Queen, but that whole classic rock and roll façade didn’t show in person. The group revealed a gentle, real quality.

“What I would want people to take away is: to show up, appreciate the boys did a good show, and that they would want to come and see us again,” Fyffe said. For a lot of our fans, we reignite their love for live music that they maybe haven’t felt for quite sometime.”