The Hidden Powers of Faith

I have always had a complicated relationship with faith and spirituality.

I remember attending Sunday mass as a child and being dazzled by the biblical stories, the hymns, the golden architecture, and the strength of being in a congregation. The ideas of being unconditionally loved by God—who will redeem me or “save me” whenever I’m having an issue—and of a pleasant afterlife awaiting me filled me with hope, excitement, and belonging.

I now look back at that period as a moment of a broad, childlike hope. I didn’t see any complexities or anything problematic about my religious faith. It served as a refuge at a time when I was growing up in a world I was trying to make sense of. It didn’t present me with a delusion, but rather with a life I wanted to believe in.

Now, I am spiritual. I often meditate, and it has incredibly helped me with occasional anxiety and depression. To me, my spirituality has generally made me more aware of my emotions and consistently inspired me to help others. The term spiritual is a broad, magnificent umbrella that turns the values of love, community, and kindness into the centrepieces of my life, and it does this without shackling itself to any significant rules, bigotries, or restrictions.

In the Western world, people have taken up Eastern practices like meditation and yoga for stress relief. People with religious faith often fall on prayer or their congregation to feel emotionally supported or like someone is listening to them.

The relationship between spirituality and mental health has always interested me. I wanted to explore how common it is for people to use religious faith and spirituality as a way to preserve mental wellness. How do other university students use their beliefs in their individual practices to combat feelings of stress, anxiety, depression, and low self-esteem? At Concordia, the Multi-Faith and Spirituality Centre attempts to be a refuge for students who seek answers and emotional guidance for their spiritual practices.

Ellie Hummel, the Chaplain and Coordinator of the MFSC, says students go there for a range of reasons. Some for religious conviction, and some because it’s a safe space where they can just be themselves. There have also been students who use it as a refuge for their mental health struggles as they recognize a link between mental health and spiritual well-being.

She says the MFSC hosts many events for students. There’s the meditation space where students can meditate or take a midday nap. There’s group guided meditation and meditative colouring, for example. On Wellness Wednesdays, students can colour, sculpt, or play games at the Loyola Chapel. There’s also a community drum circle every Monday.

“Sometimes students come to me and are really down about something. One spiel I tell them is ‘Wake up every morning and think of two things you’re grateful for.’ It’s a very powerful way to have a spiritual practice that is small yet profound,” said Hummel.

For marginalized students, the relationship to spirituality can be a bit more complicated. For LGBTQ+ students specifically, there is often an aversion to faith and spirituality due to the church historically shutting them out. It isn’t a secret that, for years, queer people have had to deal with religion being the main reason for the invalidation of their identity.

For Black, Indigenous, People of Colour and ethnic conservative communities, mental health is usually not taken seriously. In these communities, religious faith can often be used as a replacement for more serious approaches to mental health intervention. For example, if a child complains about depression, a parent might tell the child to just “pray it away.”

This may lead LGBTQ+ and BIPOC folks to have antipathy towards any sort of spiritual practice in adulthood, as it could unearth past traumas and remind them of when their mental health had once not been given the attention it needed.

However, Ashley Crouch, the interfaith facilitator at MFSC, says some of these students still come to the centre seeking spiritual guidance.

“We invite students to explore it for themselves because a lot of students want to find their place and community but don’t necessarily want to find a religion, whether it’s because of institutional frustrations or they’re LGBTQ and they have to reconcile with that,” she says. “We do a lot of active listening and figuring out for them. We then direct them where to go.”

Crouch also spoke of the relationship between spirituality, mental health, and social work. Spirituality can “propel people to action,” and this can ultimately benefit their mental well-being. For example, if someone is experiencing eco-anxiety, their spirituality can call them to participate in things like beach cleanups or protests.

As a recent student herself, she understands how vital it is to volunteer and get outside of yourself to deal with the daily stresses and challenges of student life.

Amira Adam* is a Black and Muslim Concordia undergraduate student. She frequents the MFSC to take naps in the meditation room. Outside the MFSC, she practices her spirituality by praying and meditating often.

“It keeps me grounded. Especially when I’m feeling lost or emotionally drained,” she says.

Adam faced childhood trauma, and her spirituality helps her deal with it in adulthood.

“My faith in God has also saved me from self-sabotaging and continues to guide me today. I still struggle with depression, but I am no longer hopeless,” she says.

Adam highlighted how her faith has helped her cut down on drinking. “I view prayer and meditation as wholesome alternatives to me drinking myself silly.” “Happiness is not something that is out there that I need to go find but rather something that we create for ourselves by investing in whatever brings us genuine joy on a daily basis. Which, for me, can be as trivial as a 15-minute midday solo meditation.”

Her spirituality is linked to emotional vulnerability and the comfort and self-nurturing that can bring.

She is bisexual and polyamorous but hasn’t come out to her family, saying she doesn’t feel the need to declare her sexuality to anyone. She struggles with reconciling the relationship between her religion and her sexuality as the former can be intolerant of the latter.

This reconciliation isn’t an active struggle for her, though, because she says she knows God loves her as she is.

“Either way, I’ve always felt that heteronormativity and the gender binary were social constructs that don’t necessarily reflect the truth of nature, science, or the universe,” she says. “I don’t put it past these institutions to manipulate spiritual realities to fit their agenda, and as such it’s my responsibility to have my own approach to it.”

“I don’t deny the existence of God or His scriptures, I just don’t buy that He hates me. I am here after all, and He must have wanted that. Whatever business I have with God is between me and Him and is absolutely nobody else’s business,” she adds.

“My faith in God has also saved me from self-sabotaging and continues to guide me today. I still struggle with depression, but I am no longer hopeless.” —_Amira Adam_

Hunter Dewache is a two-spirit Algonquin from Kitigan Zibi who studies communications. When he was a teenager, he didn’t have many problems with his mental health. It was only when he turned 16 that he started to experience anxiety and depression. He says he has learned to manage it, but it’s a work in progress.

“It’s not the same every day—some days are easier than others, some days are a bit more difficult, and some are unbearable,” he says. “It can get to the point where I feel like I can’t even leave my house or deal with people.”

During his first year at Concordia, he dealt with depression, particularly because he was away from home for the first time.

When he lived in residence, his depression affected his sleeping schedule. He was up all night and asleep all day. This meant he wasn’t able to make it to the cafeteria to eat during meal times. He had to eat out, which financially depleted him. His sleeping schedule also led him to miss classes.

“Our spirituality doesn’t really have a name, but I guess in settler terms it could be called animism, where you believe that everything has a soul,” he explained. “My beliefs are never centred around aspects of personal life but are more centred around how your life intertwines with the world.”

He gives an example of hunting as a spiritual practice. In his culture, whenever an animal is hunted, all of the animal is used.

“It’s our way of showing respect to the animal. So the animal didn’t give its life up just to be killed but the animal would be cherished for giving its life up to continue ours,” he says. Hunter has often turned to his spirituality for help. He refers to a belief in his spirituality where an individual has to look after four aspects of their lives in order to maintain their well-being. These four aspects include the physical, emotional, spiritual, and mental aspects.

What has helped Dewache the most to alleviate his anxiety and depression is making sure these four aspects of his life are always balanced.

Like many other BIPOC students, he’s dealt with different microaggressions at Concordia that have negatively affected his mental health. For example, a teacher once tokenized him during one of his communications classes by asking him an Indigenous-related question in the middle of the lecture.

The question was about a different First Nation than his. Even though he knew the answer, he felt like the lecturer was generalizing, which was hurtful to him.

Another issue on campus that has negatively affected him is the lack of space for his two-spirit identity at Concordia. He feels as if there isn’t enough initiative to create two-spirit spaces. 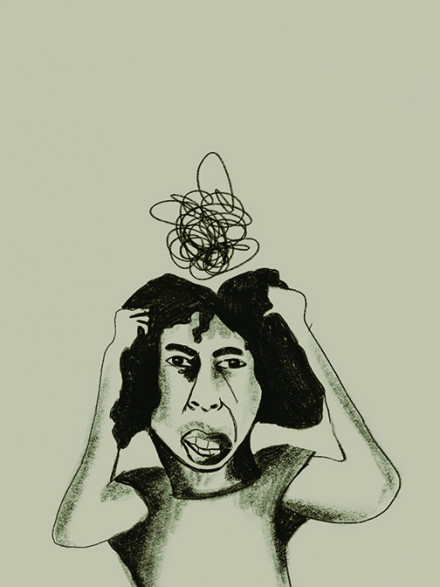 Elisha Grey is an undergraduate at Concordia studying studio arts. She is bisexual and has struggled with anxiety and a panic disorder throughout her life. The practice that has helped her the most is yoga nidra, which is used for the nervous system.

It has been specifically beneficial because her panic disorder makes her nervous system easily overwhelmed. As a teenager, she often found it difficult to function and get through the day. With yoga nidra, and occasional meditation, she’s less reactive to things that don’t necessarily deserve a reaction.

“I now have a conversation with my body like this: ‘Is this worth the adrenaline rush? Is this worth a panic attack? Or is there another way you can think about this situation that can be more beneficial to you and to the people around of you?’” she says.

Having her aunt as a sort of mentor has also been helpful. As a teenager, her panic disorder once reached a dire level.

“I remember talking to my aunt one day and I said, ‘If I’m still having three panic attacks a day, I don’t want to be on this Earth anymore,’” she says. Her aunt ended up taking her into her quiet house in Connecticut. This is where she started meditating, and this had profound effects for her overall well-being.

She says she values congregation in religious practices because when you have a mental illness it’s important to go outside of yourself.

*This person’s name has been changed to maintain anonymity.