There’s some debate over whether one artist will be bringing her own 1,500-pound pillar of clay or if the EDGY Women Festival has to provide it.

Los Angeles-based Heather Cassils will be punching that pillar for 30 minutes in total darkness, lit only by flashbulbs, as the audience lines the walls of a small room in the Blue Cat Boxing Club.

If this performance and its resulting sculpture seem suspiciously physical for a women-based arts fest, one’s lack of EDGY-knowledge is to blame—but now’s as good a time as any to fix that problem.

EDGY Women is going into its 20th edition of unapologetic feminist art and this year’s theme blends art and sport in a kind of feminine-meets-masculine tornado.

The festival is presented by Studio 303, a local art institution, and its artistic director, Miriam Ginestier, said that while EDGY is always out to unite forms, this year is special. It revolves around a theme—sports.

When organizing this year’s fest, Ginestier took out her little black book of artists she wanted to collaborate with. She extended the offer that they come be part of this year’s festival and gave them freedom in developing their own concepts.

The results are performances such as one artist physically beating herself up for three hours. There’s also a rule-breaking hockey free-for-all and a mix of high theatre with fighting in Edgy Lucha, a good-versus-evil female wrestling match.

These shows, along with many others, are on during the festival and Ginestier is waiting to be surprised along with her audience by what her artists bring. She knows the impulse behind the pieces, but won’t pigeonhole what she expects each artist to present.

“A lot of festivals are like, ‘Here, public, here are some shows for you to consume,’” Ginestier said. “And that’s not my main focus. I’m more artist-driven.”

She has invested in creating a community for the fest’s participants by doing things like renting two apartments—one for the artists and one for the technical team. She says this way they can meet each other and have meaningful exchanges leading up the shows.

Even the boxing club where most of the events are was singled out for its vibe. The Blue Cat Boxing Club, north of the train tracks in Outremont, is one that tries to build a community and foster art.

“Boxing is a sport that’s an art because it pushes limits more than just physically,” said Phil Dickson, owner of the Blue Cat.

He stressed that the setup for the shows would need to be respectful of the space.

That left the EDGY Women technical team to get imaginative in order to accommodate about twenty hanging punching bags and an audience of about two to three hundred people that will be flowing around for hours during the festival’s two-day show, Game On au Chat Bleu.

During this show, the invisible wall between the performers and the crowd will be more like a circle. The audience will be wandering around, and keeping the performers comfortable with that setup is another challenge for the tech team.

During Game On, nine artists will come together in their own corners and spaces within Chat Blue to break the rules and challenge their audience. This might seem like an exaggeration, but how else could a woman sequestered in a weight room, beating on herself for three hours be described? 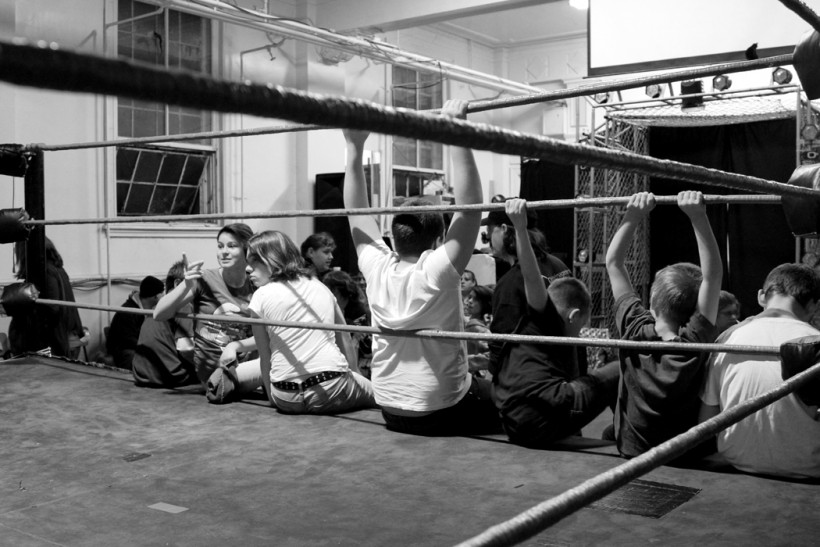 
Coral Short is presenting “Stop Beating Yourself Up,” where she’ll set up shop on a few mats and spend a gruesome three hours hitting herself. There will be blood—well, blood packets—to really drive the point home.

She’ll be doing that while Cassils, an artist and former semi-professional boxer, punches a pillar of clay in a small room for 30 minutes—or until she can’t anymore.

The performances are a way to think about how violence is entertainment. Also, since Cassils hails from L.A., she’s fascinated by the relationship between artists and photographers, and between what’s real and what’s fake.

Real from fake could also be the theme for the final show of the fest—the EDGY Lucha.

“It’s like a virus,” said Marijs Boulogne, a Belgian artist directing the Lucha. “It’s like you smoked something—you get this bliss. But it’s a real bliss. It’s not a drug. It’s artistic ecstasy.”

Female wrestlers are being directed in the EDGY throw-down by Boulogne who sees wrestling as a kind of super-charged theatre. Coming from the theatre world, when Boulogne started watching wrestling, she felt it was transcendent.

She said that although wrestling can seem fake, what the Lucha offers is what’s beyond personas and spandex. For Boulogne, the realness comes with watching which wrestler is quicker on their feet—which can get the love of the crowd and has the most creative ideas in the ring.

“Wrestling is a way for people to show their identity and to get fans,” said Boulogne. “Those people do a lot more for minority groups than any subsidy or government plan—they do it in the ring. They get respect because they are wrestlers. I think it’s much safer and more effective way to influence tensions in society.”

Boulogne added that in Mexico, Cassandro el Exotico, a popular wrestler, is labeled “‘exotic’ [because] his sexuality is not really clear. It’s unclear whether he is a woman or a man. But he actually created respect for this kind of non-distinct position.”

Wrestling has also been a vehicle for women to articulate their physical abilities. Women in Mexico weren’t allowed to wrestle for a long time but they started their own league and the audience was consistent and there was nothing the authorities could do.

So can women be physically powerful in a male way?

Like a kind of feminist Jeopardy! game, EDGY Women gives out the answer to make its audience see the question.

This year’s presentation of extreme feminism has EDGY pushing that line of what women are told they can be—and what they think they can be—right up against the things men are expected to be—all in a palatable entertainment form.

For more info on these and other EDGY shows, check out edgywomen.ca