Stingers Veteran Reflects on Her Time at Concordia

Laura Lamontagne Proving Her Importance Both On and Off the Field

Even then, she knew it was at the Stingers’ home field that she wanted to be a university soccer player. A few years later, Lamontagne now finds herself playing for the maroon and gold weekly.

Surprisingly, Lamontagne didn’t play for the Stinger when she first came to Concordia. She was approached by head coach Jorge Sanchez, but she decided to concentrate on her studies in athletic therapy instead.

Once she became comfortable at university, she approached Sanchez, finally joining the team.

“I think I came a very long way,” said Lamontagne, now in her third year with the Stingers. “Jorge helped me develop, he pushed me when it was time to and he really helped me develop to my full potential.”

In her first season, Lamontagne won the Réseau du sport étudiant du Québec rookie of the year award, an unexpected achievement she was grateful to earn. Since then, she’s risen up the team’s ranks and has become an integral member of the team both on and off the field. 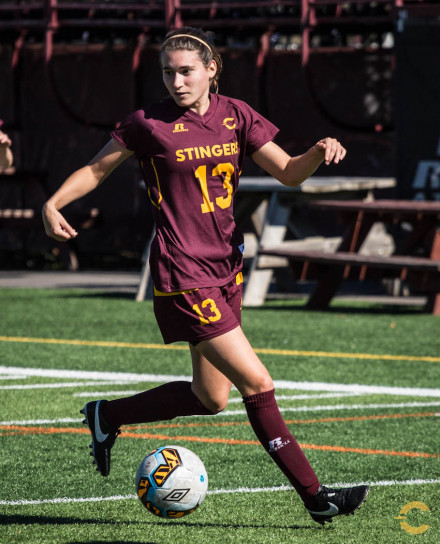 Despite all she has achieved so far in her collegiate soccer career, the Stingers’ midfielder recalls her first game as a university player, an ambition that she held since high school, one that would come to light during a hot September day in 2015. Clear skies hovered over the field as Lamontagne sat watching from the substitute’s bench as they faced cross town rivals, the McGill Martlets.

Called to come on in the second half, Lamontagne still remembers feeling nervous as she prepared to step onto the field as a Stinger for the first time.

“I was nervous, which is normal because I care, but then again I was able to take that and transform it into good positive energy and I think that’s something that helped me,” said Lamontagne.

Concordia lost the match, but Lamontagne still enjoyed the experience. Her importance to the Stingers has since grown, and she’s now one of the team’s core of veterans.

Alongside midfielders Chama Sedki and Mélisane Lafrenaye, Lamontagne has been tasked by Sanchez with taking on more leadership responsibility.

“The coaching staff can’t do everything,” said Lamontagne. “They have a very big role but [motivating] the team has to come from within.”

After the departure of former captain Alyssa Ruscio, Sanchez made no secret that the he prefers having a group of leaders instead of putting the responsibility on one individual.

“There’s no perfect type of captain,” said Sanchez. “Laura’s just one of those players who’s balanced off with a personality that draws others towards her. She’s the type of person who gets everybody on board.”

Both Sanchez and Lafrenaye hailed Lamontagne’s work ethic. Lafrenaye said that her teammate isn’t the most vocal on the field, but it’s her performance during games that do the talking for her.

Sanchez highlighted Lamontagne’s athleticism as distinctive. Because of her fitness and work rate, said Sanchez, she’s able to carry on as the game progresses. He added that when opponents begin to wear down, Lamontagne is still functioning at a high level.

Lamontagne is humbled to one of the three picked her head coach to lead the team but also recognizes the pressure of the responsibility.

“It’s an important role that I want to have and one that I know I can fulfill.” — Laura Lamontagne

“It feels really good knowing that Jorge puts responsibility onto me. It’s also a very big role so I feel like I have to meet his expectations,” said Lamontagne. “It’s an important role that I want to have and one that I know I can fulfill.”

Lamontagne, as well as Lafrenaye, want to have a positive impact on first year recruits, as well as the team as a whole. Lafrenaye added that the experience is making them better players in the process.

“We want to show [the team] that we have to work to be where we are,” said Lamontagne. “If you call out anyone at practice or in a game that they need to step up, it’s not to be mean it’s really to lift the whole atmosphere and bring everybody to their best potential. ”

In the process, both Lamontagne and Lafrenaye look up to each other as a positive influences. The veterans are close friends and always find ways to motivate each other. Although the two have a close connection, Lamontagne credited Lafrenaye as a player that’s helped her strive through her game.

Lamontagne said that Lafrenaye has always been by her side. “[During games] I feed off of her and she feeds off of me,” she said.

For Lafrenaye the feeling is mutual, adding that anytime she’s facing any sort of difficulty, she looks up to Lamontagne to push herself.

“She’s just a better player now than she was three years ago,” said Lafrenaye. “She always finds the time to work and improve.”

Heading into the final six games of the season, Lamontagne, along with Lafrenaye and Sedki, are looking to help the team to achieve their goal this season.

“No matter what happens, if we had a negative result we have to be able to push through it together as a team,” she said.