Three whistles at the 88th minute signalled the end of game four of the 2018-2019 season for the men’s soccer team.

A confrontation between Concordia’s Mateo Zazo and several Carabins players led to an argument between both teams. Many in the stands rushed onto the field.

The dispute on the field could leave players facing consequences pending a decision by the league. The altercation was followed by a severe speech from Stingers soccer head coach Greg Sutton concerning his dissatisfaction with the team’s temper and behaviour.

Twenty-three minutes into the game, Stingers fullback Yacine Ait Slimane found an equalizer when he scored the first and only goal for the team, setting it at 1-1 after the Carabins’ Omar Kreim the first goal for his teammates.

Carabins attacker Frédéric Lajoie-Gravelle was the one to score the second goal for Montréal and certainly believes in the team around him.

“We have a good team with a lot of talent,” said Lajoie-Gravel.

The maroon and gold almost tied the game again when a shot rang off the post.

The game was extremely emotional on both sides. A Concordia security guard that was standing on the sidelines felt the intensity when he got hit accidentally by one of the players trying to prevent the ball from going outside of the lines. 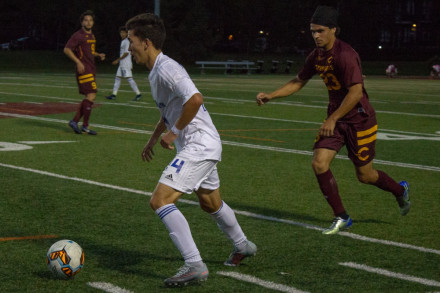 “Our team is young and less experienced, we had a lot of new players come in this season, but I’m very pleased with how we’re playing. The more games we play, the better we perform,” said Ait Slimane.

The Stingers remain patient and optimistic as they advance into the season.

“We will continue working and good results will come,” continues Ait Slimane.

Sutton is aware that the Carabins are amongst the best in the country, but like Ait Slimane, he feels that their team is getting better as the squad gets to play together more.

The Stingers will be facing rival McGill Sept. 23 at 1 p.m. at the Loyola stadium.

A previous iteration of this article stated that Carabins player guy-Frank Penda scored the opening goal. In fact, it was Omar Kreim who scored the game’s first goal. _ The Link _regrets this error.