Stingers’ Philippe Sanche is as Tough as They Come

When you say the name Philippe Sanche to those who know him, you get a myriad of stories—all accentuating the same thing.

For Concordia Stingers men’s hockey coach Marc-André Élement, it’s when his captain blocked two painful shots late in a game last year, had to go back out for another shift seconds later, and then went right back down to block another.

For Sanche’s teammate Tyler Hylland, it was when the two played junior hockey together. Sanche had missed a major part of the season due to injury, coming back just before the playoffs. Their Blainville-Boisbriand Armada team was expected to be eliminated quickly in the first round by a much stronger opponent in the Val d’Or Foreurs, which won 49 games to their 23.

Instead, Sanche brought his team to the largest upset in the history of the Quebec Major Junior Hockey League, leading his team in points and scoring the series-winning goal in triple overtime.

“No one better could have scored that goal,” said Hylland.

Those around Sanche will tell story after story about him getting beaten down, hurt, or just put behind the eight ball. They all have the same ending: him jumping right back into the fight.

“If you get hit, you gotta get back up and keep working. It’s what I’ve always done to end up where I am now. It’s part of me,” said Sanche.

Sure, in sports you tend to hear plenty of that tough talk, combined with clichés like “fall down seven times, get up eight.” Lots of athletes say that’s who they are.

But few are the smallest player in their league, take as much abuse as Sanche does every night, and continue to play a punishing style of hockey.

At five-foot-five, Sanche is the smallest player in Ontario University Athletics hockey. He’s also consistently one of the most dangerous, skilled, productive players in the league. He’s never been one to let his height hold him back.

The moment he was able to play contact hockey in bantam, he went out and started throwing hits.

“I always liked the physicality of the game. I was always trying to hit the bigger guys,” laughed Sanche.

While he might not have let his size be a barrier, others have doubted him plenty.
In his first year of midget AAA, he was cut from the team for being too small and sent down a level to midget espoir.

“It went into my brain. I wanted to prove something—to prove I was good enough to play in that league,” said Sanche. “It was just something to motivate me.”

He put up impressive numbers with top minutes and built a strong reputation. So strong that in his first year of hockey in the QMJHL, he was right away given plenty of playing time and a spot on the powerplay, a place reserved for the best offensive producers.

From there, his production soared. He scored 200 points in 210 games with the Armada over his years in junior. When he got to Concordia, nothing changed. He scored 30 points in 26 games in his rookie season and has averaged at least a point per game in every full season he’s played.

When asked about Sanche’s skills, Élement listed the collection of things that he likes about his player. There’s the deadly wrist shot, the defensive strength, the poise, and the toughness, he said, before laughing and adding how annoying Sanche is to play against.
Coaches and players alike have said how much they hate playing against Sanche and how much of a pest he is. He’ll hit you, throw some trash talk in, get in every opposing player’s face, and grind you out every second he’s on the ice. He’s a master of getting under people’s skin.

Sanche knows how good he is at that; it’s something he takes pride in, even if it’s not always the most painless strategy. Yes, it will get players off their game, but it also means them coming after him with the checks, elbows, and high sticks that he takes time and time again.

He’s fine with that trade-off.

“[It’s] his heart and his balls. He’s just not scared of anyone. He’s not the biggest guy out there.”
— Tyler Hylland

They both come from Mercier, Quebec and played junior together. Sanche was a big reason Hylland chose Concordia and even played a major role in Hylland choosing Canadian junior hockey over going to the United States. His description of what makes Sanche special is a bit different than Élement’s.

“[It’s] his heart and his balls. He’s just not scared of anyone. He’s not the biggest guy out there,” said Hylland. “He’s got a laser beam of a shot [and great hockey sense]. But it comes down to heart.”

It’s what got Sanche named captain of the team this season after the departure of the team’s former captain, Philippe Hudon, who is now playing professional hockey in the ECHL.

“Frankly, I didn’t envision anyone else taking over the reins of the captaincy other than Sanche,” said Hudon. “He’s well-respected in the locker room as evidenced by his unmatched work ethic and unselfishness.”

He’s not the most talkative captain, but Sanche leads by example and lets his play, production, and sacrifice speak for themselves. That style of showing up to work prepared and productive is a big reason why Sanche was named captain. The Stingers are a very young team this year. Eleven players are rookies and ten others are in just their second season.

That means only six players on the team had experienced more than 28 games in university hockey before this season. Adjusting to a new league is difficult; having a leader that has the right habits and can just show new players what needs to be done is a major asset. 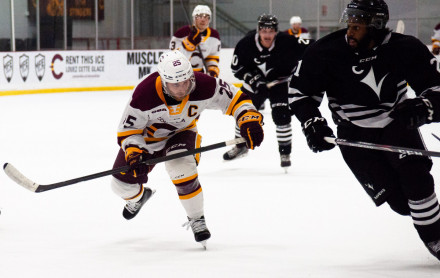 “He’s always been someone that I’ve looked up to and tried to model my game after,” said Hylland. He explained that it’s a constant inspiration for the team to see Sanche get knocked down so much, only to jump back up and go to the dirty and dangerous areas of the ice to make a play. When a player sees that, they can’t help but think, “If he can do that, so can I,” he said.

That kind of respect in Hylland’s voice is a tone you hear when any coach or teammate talks about the captain; the locker room has plenty of Sanche fans.

At this point, Élement is no longer surprised when he sees Sanche take one of the many bits of legal and illegal abuse he gets every game, pick himself up and either go right up to the six-foot-six behemoth that hit him Sanche has been perhaps overshadowed by teammates. In his first year, it was the team’s all-time points leader Olivier Hinse. The next year, it was league MVP Anthony Beauregard who garnered the attention. Last year, it was rookie goal-scoring sensation Hugo Roy.

During those years, Sanche was the picture of production and consistency. Through three years and five games (thanks to missed time this year), Sanche sits tied for fifth all-time in goals in Stingers history and eleventh in points.

He’s still got the rest of this year and his senior year next season as well. That’s plenty of time to move up those rankings.
If he were to score at a point per game pace for the last 12 games of this season and 28 games of next season, he’d finish his career with 123 career points, good for second all-time. He is 13 goals away from second all-time on that list as well.

In his three full seasons with the team, he has scored 11, 15, and 12 goals, plus the one he scored this year. It wouldn’t be a stretch to see him hit that mark if he can stay healthy, though that will be a difficult task.
This year, Sanche has been limited to just five out of 16 games with a broken hand, but will be back in January. It’s been a difficult time for him, having to be away from the game. But if anyone thinks this injury, caused by blocking a shot, will change how he plays or what he’s willing to put on the line, think again. Sanche knows what makes him the player he is, and there’s only one way he’d ever change that.

“Someday, if I don’t want to do it anymore, I’ll just stop [playing]. I’ll go play beer league with my friends,” said Sanche.