Wednesday night, after a sea of Stingers fans hurried into the gym for the first game of a double header, McGill vs. Concordia basketball playoff magic was recaptured. This time, with electrifying energy and loud crowd chants, Concordia was able to break McGill’s seven year run to the finals, defeating the Martlets 62-55.

Heading into the game, Concordia had bested their cross-town rival three out of four times in the regular season, games all won by double digit scores. This momentum seemed to fuel the Stingers on game day as it became clear how they planned to pressure their opponents and dictate play.

Concordia’s on-ball defence caused many problems for McGill, who missed 11 out of their first 14 shots and committed five turnovers in the first frame. Looking overwhelmed and seemingly outplayed, the Martlets had no counter attack for Concordia’s active hands and ball pressure.

After scoring Concordia’s first six points of the game, Rookie of the Year and First Team All-Star Myriam Leclerc explained she felt no jitters coming into this crucial game.

“This game was no different than any other game in terms of how I was feeling. Each of my teammates have confidence in me and my coaches too,” she said. “We need to share the ball and that’s what got this win for us.”

Closing out the quarter on 9-2 run, Concordia looked energized by the cheers and chants of the fans, as they erupted every moment the Stingers forced a turnover or made a good play.

Though they took a 19-9 lead heading into the second, McGill slowly creeped their way into the game rallying behind fourth year guard Gladys Hakizimana at the helm, who had a team high 19 points. McGill started to show why they had been in the finals every year since 2011. 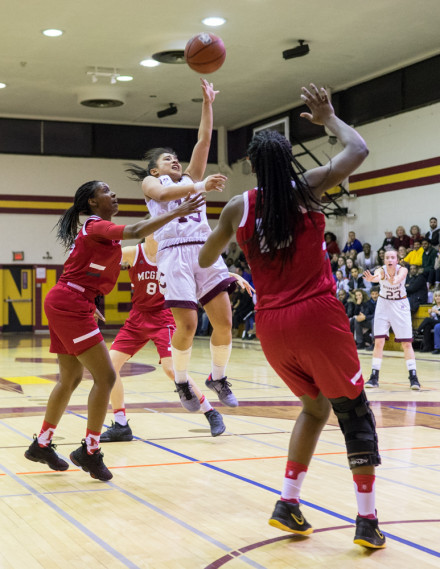 Coming from behind in the fourth quarter, the Stingers went on an 11-0 run to seal the deal, and their spot in the championship game.

Outscoring the Stingers 20-11 in the second quarter, McGill were cleaner on their offensive sets, tighter on ball screens and fed first year Forward Sirah Diarra the ball where she had room to operate and score easily in the paint, as she contributed with 10 big points in the quarter, finishing with 14 on the game.

Once momentum shifted back McGill’s way, Concordia’s head coach Tenicha Gittens knew her girls, despite being a very young team, weren’t going to fold but she made it clear that it’s important to relax and stay composed.

“All we need to do is take it one step at a time, one possession at a time, get a stop and come down and execute on offense. At the end of the day, it comes down to getting stops,” she said. “You gotta be able to be disciplined and get the stops when you need them.”

At the half, the Stingers led 30-29 but at this moment it was far near impossible to predict which team would land the last blow.

As the third quarter began, both teams traded baskets in a battle between two of the league’s top scorers. Both Myriam Leclerc and Gladys Hakizimana carried their teams of their backs, putting up nine and 11 points respectively in the frame.

Down by three, with 52 seconds left to go in the quarter, Leclerc hit both free throws to head into the last quarter down 43-41.

After McGill built an eight point cushion (51-43) a little under mid way of the fourth quarter, Concordia’s second leading scorer Caroline Task, who was absent much of the game, understood what was needed to get herself going.

“All we need to do is take it one step at a time, one possession at a time, get a stop and come down and execute on offence. At the end of the day, it comes down to getting stops,” —Tenicha Gittens

“Honestly, I just think defence. You get a stop, you get pumped, you get a steal, your team converts on it and you get an assist. For me, when my shots not dropping, that’s where I go,” said Task who put up 14 points in the victory.

This happened to be the turning point of the game. With 4:58 seconds left to go, the Stingers—rejuvenated by the lively fans and palpable atmosphere—went on an 11-0 run, where Task and Leclerc led the way.

McGill desperately tried to pull off a comeback but the last dagger by Stingers guard Areej Burgonio, who stole the ball from Hakizimana with 20 seconds left trailing 56-53, proved that streaks are meant to be broken. 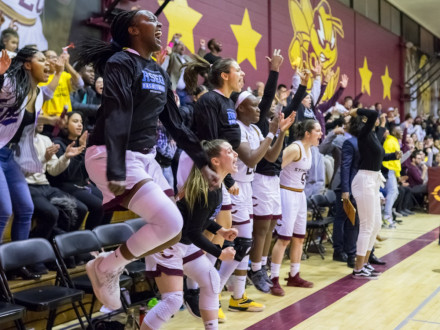 The Stingers will face the Laval Rouge et Or on the road this Saturday to compete for the RSEQ title.

Head Coach Tenicha Gittens valued her teams determination after the game and doesn’t shy away from letting it be known that hard work meets reward.

“We love the energy that the crowd brought,” she said. “I like that everybody’s seeing what our girls are doing on the floor. They’re working hard and I’m just happy we were able to give everybody that [dub].

Despite losing all their matchups against the Laval Rouge et Or this season (0-4), Concordia goes into this title game looking confident and vengeful. The last time both teams met, Concordia came up short in a 70-72 loss that Gittens understands where corrections need to be made to get a favorable result.

“They’re gonna do a lot of switching. They switch pretty much 1-5 at Laval, and it’s just us exploiting the switch and seeing where those mismatches and opportunities are and just maintaining your poise,” she said.

In this final, Concordia will seek to end their 20 year championship title drought meanwhile Laval will look to reclaim the trophy they last won in 2010. The game will be played at PEPS Stadium at Université de Laval in Quebec at 6 p.m.