Along with author of Le Plongeur Stéphane Larue, Pablo Strauss read from his translation The Dishwasher, a novel about a young graphic designer who dives into a pool of dirty dishes and imparts Montreal’s underground night scenery.

Within the surrounding full-volume walls of Drawn and Quarterly’s children’s collections, Strauss pulled the audience’s attention through the opening lines of Chapter 22 from the translated version of the novel Le Plongeur on Sept. 5.

“The smoke of cigarettes and joints rose in thick spirals above the mezzanine,” read Strauss with an animated tone. “The crowd grew denser as we moved forward.”

Both French and English readers were eager to hear from Larue, whose experiences working a multitude of restaurant jobs around the city inspired the raw portrayal of his local protagonist. He is barely twenty years old, works as the kitchen’s dishwasher, and loves listening to metal.

Though questions and praises flooded towards the author, Strauss sat beside him, quiet and diligent, waiting for his turn on the mic.

When he first heard there was a book called Le Plongeur, he immediately knew that he would be the one to translate it.

After Larue read an introspective sequence of the protagonist’s crippling gambling addiction in French, Strauss read a scene he thought well-demonstrated Larue’s use of description.

In the scene, the protagonist drowns himself in the crowd of a heavy metal concert.

“A roar was cresting in waves. The Metropolis began to shake, I could feel it in every bone in my body and in my solar plexus,” Strauss read the following paragraph in a low and gradual grumble.

Until the last sentence, the room was silent, listening to Strauss reading, appearing swept away by Larue’s imagery and Strauss’ careful attention to each word.

“One of the big attractions of this book is, I think, the restaurant setting, but there’s really a lot more to it,” Strauss said.

Originally from British Columbia, Strauss also worked restaurant jobs here and there as a dishwasher. He expressed his admiration for Larue’s balance between pace and description.

When he first heard there was a book called Le Plongeur, he immediately knew that he would be the one to translate it.

The story takes place in Montreal, early winter 2002. Strauss said that Larue “tapped into something that has been neglected by many writers,” especially aspiring writers who leave university to begin their careers.

Larue reached more people by speaking directly from the unlikely extremity of Montreal’s urban landscape. Those who would not normally pick up a book would be drawn towards Larue’s simplicity and saturation of detail. 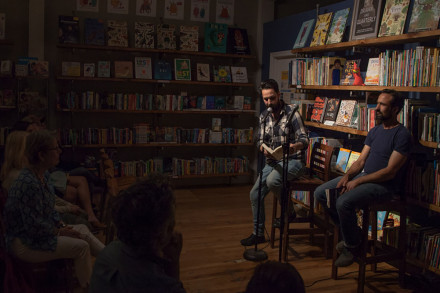 Larue and translator Pablo Strauss read from the the book. Photo Valen Mamchur

“As a French Quebec writer,” Larue said, “being translated is like a dream come true.”

As an avid reader of English novels, one of which is Herman Melville’s Moby Dick, the author managed to fine-tune his work closely and directly with Strauss’ drafted translations. Most translators do not have that same access with their authors as Strauss did.

“He already did the heavy-lifting,” noted Strauss.

According to Larue, the novel is a culmination of autobiographical and biographical material. When writing his novel, he wrote about people he knew and respected in the field.

One of the first English books he remembered reading that portrayed the vitality of urban restaurant culture was Down and Out in Paris and London by George Orwell. In fact, it was so true to life, he lent the book to many of his kitchen and waiting staff friends.

“I did pretty much every job you can think of in the restaurant industry and in the bar industry. The one that I thought was the most crystal [clear] was the dishwasher,” he said about choosing the protagonist.

“He is like a fly on the wall, he sees everything.”

Strauss immediately jumped in, “He is like an observer.”

He believes that Larue succeeded in transmuting a previous humbled position into something beautiful.