“I was constantly making instrumentals that I had no use for. Heather [Kirkpatrick] was constantly writing good songs without producing them,” said Dylan Obront of Sorry Girls, remembering their early days as a band.

Sorry Girls, a project of three years, consists of producer Obront and songwriter Heather Kirkpatrick. Their music has been refined significantly since they first started playing together. The two are Concordia University alumni who met while living in residence in their first year.

Following their 2016 EP Awesome Secrets, they’ve returned with their new album Deborah. The Montrealers held a release concert on Nov. 2 at the Diving Bell Social Club.

Eighties pop influences permeate Sorry Girls’ music. As Kirkpatrick’s vocals rang out across the room and the synthesizer began to moan, the crowd stood up to enjoy the headliner.

On that night, the lineup of three bands consisted mostly of women.

“When I walked in tonight, I was like, ‘Oh yeah, female power,” said Caitlin Woelfle-O’Brien, whose stage name is Blunt Chunks.

“It’s always nice when there are more women than dudes around,” she added. “I think now, people are putting more energy into making a lot more lineups of inclusivity.”

“I feel like it’s important, as a woman, to stand up there and do my thing and have my voice heard before a bunch of guys get up on stage and rock out. I’m proud to do that and represent.” — Caitlin Woelfle-O’Brien

The Toronto-based artist was from the same tight-knit friend group at Concordia and was excited to perform alongside Sorry Girls with her own unique sound.

Sorry Girls’ influence in the community was visible in their relationship with the band Lizzy & the Fanatics.

The band lead, Lysanne Picard, became an early supporter of Sorry Girls when she heard their 2016 EP. It was when Sorry Girls came across Picard’s EP that their professional cooperation bloomed.

“Since we are an all-female band, we tend to get targeted by events or bands that have a similar vision,” said Picard’s bandmate, Amélie Laplante. “It’s way more fun to play shows where there are other females […] there’s a different vibe.”

Many of the performers expressed that there’s a lot of work to be done about the gender dynamics of the music industry.

“I’ve been token female a lot of times,” says Woelfle-O’Brien. “I feel like it’s important, as a woman, to stand up there and do my thing and have my voice heard before a bunch of guys get up on stage and rock out. I’m proud to do that and represent.” 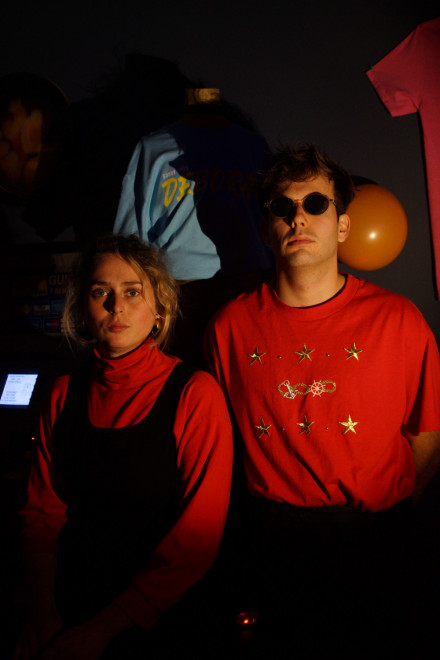 Kirkpatrick and Obront met during their first year at Concordia. Photo Nicholas Dundorf

In the meantime, Sorry Girls will continue to use their growing popularity to challenge existing standards.

“The goal is always to focus on people who don’t get enough attention,” said Kirkpatrick. “I think it’s important to provide a platform to people if you have the ability to do so.”

The duo is invigorated by the release of Deborah and will be going on a tour through the United States. While Obront expressed some fears of long-term road life, the duo is excited to take their sound around the continent.

Sorry Girls have recently been fairly active in the local music scene, particularly at the Diving Bell.

“Sorry Girls have played at the Diving Bell quite a lot in the last couple of months,” said Austin Wrinch, the venue’s manager.

The feeling seems to be mutual, as Kirkpatrick puts it. “We’re developing a close relationship with the Diving Bell […] That place really feels like it’s developing this amazing community in Montreal, which is really exciting.”

The role of Sorry Girls in the local music performing community was evidenced when Wrinch described the group’s first show.

“They had this drag performer named Crystal Slippers open up for them […] there’s the drag community and the music community. Bringing them together is always cool.”

The relationship has been collaborative, Kirkpatrick feels—Sorry Girls has even shot a music video in the space.