Smitten With Kittens: Appreciating Cats and Art in Montreal

Many spaces are decorated by plants that breathe freshness and animate the areas they occupy, but having animals occupy a space permanently is less common.

Montreal is a pet friendly place, but it has a few spaces devoted solely to the appreciation of the feline form. There’s Café Chato in Verdun and the Alley Cat Gallery, located quite literally in an alleyway in Notre-Dame-de-Grâce.

Café Chato is located in the middle of Verdun St., one of the neighbourhood’s main roads, just a short walk from the metro. Co-founder Agnes Bohn said they’ve received a warm welcome from the community since opening last August.

Bohn, Rémy Saminadin, and Sebastien Seigne worked together to develop the café that allows you to adopt the animals that crawl along the floor. Once a month the café and a local animal rescue host an open house day for adoptions they’ve been advertising.

“I already knew of the concept, because I’d been in a cat café in Paris. I really liked it because of the ambiance in the cat café, particularly in Paris because it’s a large busy city and when you go inside it’s like you’re in a calming bubble with a relaxed, chill, atmosphere,” said Bohn. “I thought it was wonderful and told myself it would be interesting to do the same thing in Montreal.”

The café’s decor was conceptualized by Bohn, who consulted a designer from Decor Feline to make the space as cat-friendly as it is chic. Shiny medium brown shelves form broken puzzles on the wall. These shelves are not for books though; they’re meant for the cats to perch and play on. The decor is modern and industrial, and juxtaposed with velvety victorian sofas and mirror frames. 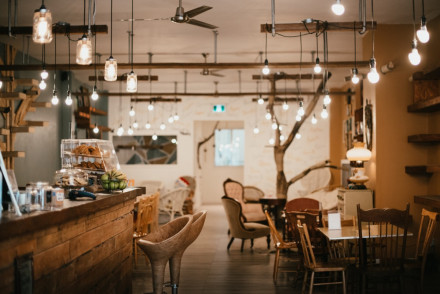 The Café Chato offers a cozy atmosphere and cute kittens to be mesmerized by. Photo Léna Seltzer

Leafy plants accent the softly coloured space. In the back corner, you can find a play area filled with children’s toys. In the front you can buy cat-related merchandise, like cards and buttons.

Bohn said that around 40 cats have been adopted since they opened last summer. She mentioned that kittens tend to get adopted much quicker than adult cats. Café Chato does that by working with Refuge Animex, a rescue staffed by volunteers.

They deal with the checks and balances that come into play when actually adopting one of the cats as opposed to interacting with them at Café Chato. They try to make sure the personality of the cat is well suited to that of the owners, and verify that potential adopters are serious about owning a cat so they don’t end up back on the street. Refuge Animex also takes care of sterilizing the cats and taking them to the vet.

“I’ve always had cats, so I’m comfortable around them. I can’t live without cats. When I moved to Montreal, I didn’t want to be without a cat so I adopted one quickly,” Bohn said.

“I’m more at ease with cats than dogs,” she said, as she went on to explain that running a cat café compared to a dog café is a very different experience, considering dogs need more care than cats. But that doesn’t mean she doesn’t have her own challenges.

“Not all cats are comfortable in this kind of environment. They assess whether or not it’s in the cats best interest to be in the café or not because not all of the cat’s temperaments are suited to it,” she explained.
“Kittens are well suited to it because they adapt easily. With adults it’s a lot harder,” said Bohn.

Café Chato opens at 7 a.m and closes at 7 p.m on weekdays. Not everyone who goes in is there for the cats. There’s not many cafés on Verdun St., meaning they get a lot of customers who walk in for a coffee on their morning commutes.

Since Café Chato is a child-friendly space, there have been issues given cats are more easily disturbed by rambunctious behaviour.

The café has a list of rules in French on the wall near the entrance, like don’t pick up the cats or feed them. Bohn explained that being picked up multiple times in a day by strangers can be stressful for the cats.

“We do have kids that come in regularly and I’ve noticed an evolution in their behaviour towards the cats. It’s really fun and interesting to see. It helps them to learn how to be with animals,” said Bohn. She noted that since the café opened, a community has developed around it. It benefits people from all walks of life; Bohn explained that seniors who may live alone find joy in the companionship the cats provide.

“I already knew of the concept, because I’d been in a cat café in Paris. I really liked it because of the ambiance in the cat café, particularly in Paris because it’s a large busy city and when you go inside it’s like you’re in a calming bubble with a relaxed, chill, atmosphere. I thought it was wonderful and told myself it would be interesting to do the same thing in Montreal.”
— Agnes Bohn

Montrealers who frequent NDG’s Sherbrooke St. W. may have noticed an alleyway lined with numerous photos and paintings of cats. To the casual passerby, that may be all it appears to be—but if you look closely you’ll realize that these artworks were placed in the alley intentionally, coming together to make up a gallery.

Located at 5711 Sherbrooke St. W., the Alley Cat Gallery, aptly named, was started a number of years ago by NDG resident John Jordan. Compared to other art galleries, the Alley Cat is rather informal. With no entrance fee, and it being entirely outside in the alley, anyone can enjoy the artwork and at any time of day.

When you step off the street and into the small courtyard, you’re greeted by rows upon rows of cat-inspired art of all shapes and sizes. Lining the walls of the alleyway are designs from artists from all across Canada, with a smattering of works from local Montreal artists like Rupert Bottenberg, James Duncan, and even Jordan himself. Among the most interesting pieces are a yin-yang symbol reinvented with intertwining black and white cats. 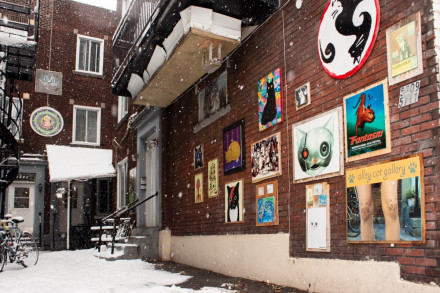 The Cat Alley is an outdoor exhibit in the Notre-Dame-de-Grâce neighborhood. Photo Savannah Stewart

“Around 2014, we put the first piece up, it was the yin-yang. I painted that, and it was our inaugural piece,” said Jordan.

While some pieces are original, sometimes Jordan curates his art by taking to the internet. When he finds something he likes, he reproduces the prints on a large scale, and with the help of his roommate, hangs them up in the alley. From time to time, art pieces shift within the gallery or are replaced, giving visitors a new perspective of the art.

“Most of it I find on the internet, but there is a selection of local artists who have donated their artwork,” said Jordan.

Some pieces are placed strategically, based on neighbouring businesses. For example, Jordan explained, a painting of Hello Kitty wearing a dress with a bright red skirt and matching bow adorns the wall next to a dressmaker’s shop. The painting was done by Jordan’s friend and bandmate, Jea Rhee.

The funny thing about this gallery is that it was never fully intended for it to be a gallery at all. Jordan and his roommate were inspired after noticing an increase in the amount of vandalism in the courtyard.

“We used to have a real problem with tagging here, the landlords had to clean the tags off the walls every two or three months,” said Jordan. “We got sick of seeing them all the time, and the place was just generally grimy and dirty and no one liked spending time in it.”

They figured that perhaps putting up art would be a good way to fend off the problem. First, they broached the idea of a mural, but that seemed too permanent and would need approval from the landlords. The gallery was a perfect way to decorate with art that could be changed or moved as need be.

“We put up the yin-yang and from that point on, we thought, ‘It’s cute, it’s an alley.’ We’ve got cats in the alley, why not make it a cat gallery?” he said.

Unfortunately, while the walls may be safe from graffiti now, sometimes the artwork is not. Since the gallery is open air and anyone can access it, there have been instances of artwork being vandalized. The gallery’s website depicts a piece titled “Celestial Cat” by artist Laura Barbosa that was scratched out. When incidences like this occur, sometimes pieces can be fixed, but other times the piece has to be taken down and replaced.

“We replace pieces if they get damaged beyond repair,” he said. “We had a Maud Lewis up there that we mounted on the wrong kind of wood, so we managed to save the print but we had to scrap the wood.”

Perhaps one of the most central pieces in the gallery is an original piece done by Jordan himself. At the far back of the gallery, above Jordan’s home, is a portrait of his own cat Humbert. Humbert is a friendly cat, who comes and goes from Jordan’s home as he pleases.

He’s quite a character, so much so that he was entered as a candidate in the 2015 federal elections under the NDG-Westmount riding. With posters featuring photos of him in places all around the neighbourhood—including one of him sprawled on top of a case of beer in a depanneur—and slogans like “Treats for everyone” and “No worse than the others,” Humbert ran quite the campaign.

Considering he was the only candidate on four legs, he did pretty well for himself, earning over 100 votes.