Student-athletes looking to create ongoing conversation regarding diversity and representation in the RSEQ.

When Nelly Owusu hit “post” on an open letter to the Réseau du sport étudiant du Québec on Facebook, her heart was beating. The third-year basketball player, who describes herself as shy and reserved, has been playing in the conference since the age of seven and always represented them proudly. But now she was asking herself “why wouldn't they represent me?”

Taking to social media at the start of November, Owusu expressed the disappointment and sadness she was feeling at “the RSEQ’s lack of care and empathy […] towards BIPOC student-athletes.” She understands, she said in her letter, that racism and social injustice are difficult subjects to address, but “Black Lives Matter is more than just a movement [...] we are more than a trend.”

“I’m super shy, so I was really nervous,” she says. “But I felt good afterwards because I knew I had a lot of support and I knew a lot of people felt that way.”

One of those was fellow Stingers athlete, Keyara Valencia-Hinds, who posted her own open letter just two days later. In the letter, she said she had been witness to a “failure to stand up for a cohort that represents a very large portion of the league,” and challenged the league that she has represented with “passion, pride and love” to start real conversations surrounding race and inequality. 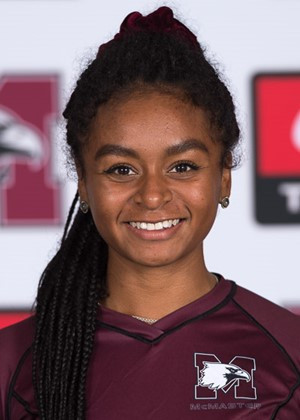 “I’ve always been really quiet,” Valenica-Hinds says. “But I’m not afraid to stand up for what is right and to stand up for Black people because we’ve experienced so much nonsense just for the colour of our skin.”

In a year when racism and inequality have come to the forefront of the public narrative, the athletes’ words clearly had an impact. On the same day that Valencia-Hinds posted her letter, the RSEQ published a statement, inadvertently responding to the challenge of starting a conversation.

“The RSEQ board of directors and general management want to underscore that any form of discrimination in the student community is totally unacceptable,” the statement said.

Citing that “respect is the basis of a strong and united network,” the statement went on to say their code of ethics “stipulates that we must treat each student-athlete with respect and fairness regardless of gender, race [...] or any other variable.” What followed was a Twitter post with the statement and the now familiar #BlackLivesMatter.

But a “copy and paste answer”, as Valencia-Hinds calls it, is not what they were looking for from the league that oversees more than 200,000 student-athletes in the province.

“They weren't looking at the point,” Owusu says. “We’re not asking for a statement about what you’re representing, we’re asking for you to take action.”

Valencia-Hinds, too, was upset and disappointed at the reaction, but ultimately sees it as motivating. “I’m not going to stop until we get what we deserve,” she says. “[The] least they can do as a league [is] provide a safe space for all black athletes to exist in, especially if we are dedicating four-plus years to the league.”

As a veteran of her sport, Owusu has been playing in the RSEQ since the age of seven and says that she’s been a first-hand witness to the amount of racial slurs that have been going on.

“I remember when I was younger, the crowds would be more racist towards the athletes of colour,” she says. “It has improved, but not as it should.”

“It's not a very overt thing that happens,” Valencia-Hinds says of her experiences on the field. “It's just little slurs or comments on the side [which] you can hear from the crowd or the people you’ve played against.

“This is our life and the life we have to live when sport is over.” – Keyara Valencia-Hinds

Following the murder of George Floyd in May, many sports leagues and athletes around the world expressed their unity with Black Lives Matter. Millions posted a black square on Instagram with the RSEQ being no exception. But real change for the league and its athletes, Owusu says, does not just come from following trends.

“‘Let’s find solutions by following trends’ is the wrong approach,” she says. “We are not trends. This is our lives, this is what we go through on a daily basis.”

“Our focus was, ‘this is more than sport’,” Valencia-Hinds says. “This is our life and the life we have to live when sport is over.”

The key to real change, both athletes say, is representation. Throughout her younger years playing in the RSEQ, Owusu was always aware that representation for Black people wasn’t there, so it was hard for her to look up to anyone and truly speak her mind.

“When I was younger I would always try and do what the other people say because I didn’t want to get judged for what I think,” she says.

“A lot of people don’t realize how much power is in representation,” Valencia-Hinds says. “We need to represent in everything that we do so that we are able to continue this movement of creating more diverse representation in everything, not just sports.”

Both athletes have received an incredible amount of support for their actions, but they are hoping to inspire an inclusive and ongoing conversation. Trends, they say, are nice, but ultimately they want to see change, even if it is not immediate.

“I might not be able to see everything that is going to happen as a result of me speaking out and standing up for what is right,” Valencia-Hinds says. “But I am hopeful that it's going to change."