Montreal’s punk scene is a living, breathing organism. It’s as vibrant as it is loud, but still, there’s something missing: Female presence and representation.

Don’t make the mistake though—there are tons of kick-ass riot girl bands and creative musicians on the island. But more often than not, shows and events miss out on the talent when they fill their roster with male-centric acts, leaving a valuable and unique part of the community to the sidelines.

Or at least, that’s how the artists from Pussy Stench, Chârogne and the Lef7overs feel.

“I was tired of being in the crowd all the time and not seeing a lot of girls on stage. Even in the crowd we weren’t that many,” says Devan Ménard, the guitarist and lead singer of the band Pussy Stench. With hardly any women performing in the punk scene, Ménard decided to bring her own musical talents to the table.

As chance would have it, Ménard bumped into Dani Volovik, an old acquaintance from Dawson College, and the two formed the beginnings of their grunge-punk band.

Starting off as an all-girl punk band, Pussy Stench has gone through a few different band members since. Currently, the group is made up of Ménard on the guitar and vocals, Volovik on the second guitar, John DeNardi on the drums and Thomas Papakostas on bass.

Having parents who were punks during their time, Ménard grew up on 80s punk music, but she really found her niche in the 90s riot grrrl scene.

“I brought all of that influence from [bands like] Bikini Kill and Babes in Toyland,” she said.

The Lef7overs, a five piece all-girl punk cover band from Montreal, are another force to be reckoned with. These fierce and outspoken ladies got their start last summer as a cover band for the L7’s, an iconic grunge rock group from the late 80s and early 90s.

The band originally performed at a fundraiser for Montreal’s Rock Camp For Girls, a summer camp for teens that promotes self esteem and critical thinking by learning how to rock out. Since then, the band has been playing in bars all over Montreal.

“Kylee was so fierce,” said Maryam Khalakhala, The Lef7overs’ drummer. “She was mild-mannered when she was in the crowd, but the minute she sat down behind her drum kit, she turned into a relentless beast.”

The punk band Chârogne started off as a cover band that would only play songs originally composed by Riot Grrrl. After a while though, the lead vocalist Catherine Morrissette wanted the band to start writing and performing original tracks.

“After a year, I felt that I should quit because I didn’t feel like doing covers and I wanted to compose music,” Morrissette said. Chârogne now focuses on creating their own original works.

Pussy Stench’s latest EP inspires listeners to be courageous and express themselves, especially in terms of female empowerment in the punk scene.

“I think it’s a lot about self expression not only as girls in the scene, [although it’s definitely] a part of it,” Ménard explained. In their song “Scratch,” the lyrics talk about how some women are told that the punk scene is dangerous and that they’ll get hurt. “But then you join in anyways and you’re just as riled up as the rest of the guys.”

Ménard said it’s an internal issue within the punk scene. Their EP promoted the idea that people, particularly women and young girls, should break out of their shells and be fearless, and be who they want to be without worrying what others might think.

Although all three bands have strong backbones and powerful feminist voices, they’ve all encountered their fair share of sexism in the industry.

Khalakhala described an experience when her professionalism and musical ability was questioned by one of the sound technicians working at a venue they were playing at.

“He looked at me and asked if I was in a band. I said yes. He said, ‘What instrument do you play?’ I looked down at all the drum gear I was carrying and said, ‘Drums, obviously,’” Khalakhala explained. “He genuinely looked perplexed and said ‘Oh yeah? A girl on drums?’ It was so confusing for me to understand why that was so surprising to him.” 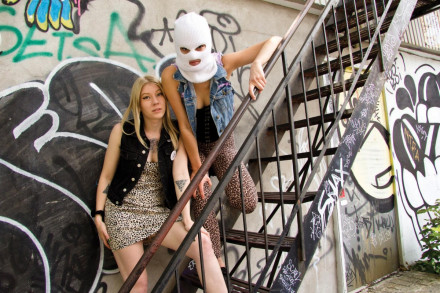 Guitarist Victoria Turner from Lef7overs felt that, at times, their band wasn’t considered as professional as male musicians. “A lot of people don’t take us seriously. They think we don’t know how to play and are very surprised when we do,” she said.

For Pussy Stench, Ménard explained that some venue and concert promoters had tried to take advantage of the band by underpaying them. She had witnessed one band get paid $40, but then the same venue promoter had only given Pussy Stench $20.

“I’m seeing more and more communities coming out and saying that they want more and more all-girl bands,” Ménard explained. “But then you also see promoters who take that as an opportunity to promote the fact that there are girls [at all]. Like, ‘Oh yeah, all-girl band, that’ll bring in the money’. Ironically, they’re not paying us that much.”

Ménard suspects that this may be because some people in the scene aren’t used to seeing too many all-girl punk bands. While she sees her guy friends succeeding, she finds herself and her band constantly having to emphasize the fact that Pussy Stench is to be taken just as seriously.

Not becoming seriously recognized as a band is one of the reasons why women in punk may be hesitant to start their own bands.

“I just saw that [starting a band of their own] wasn’t even a question in their minds,” she said. “I didn’t really see girls going up there and starting one of their own, you know? So that was a big thing [in the EP].”

This is one of the fundamental reasons why it’s important to support all-girl punk bands. Buy music, attend shows, help artists continue to create. Then, down the line, more artists can get inspired and make their own music.

Pussy Stench’s song “DIY Abortions” became a sort of anthem for Pussy Stench soon after they wrote it and began performing it at shows.

Ménard explained that when they first wrote it, the defunding of Planned Parenthood in the United States wasn’t a concern, but the song became all the more relevant after Donald Trump was inaugurated. Not only concerning the tyrant bills that Trump had instilled, but also to send out the message that no one should be told what to do with their own bodies.

“Whether it’s getting an abortion or being open with their own sexuality, I think it’s a song that gives a big fuck you to all the ignorant people who still go against [these things],” Ménard continued. “Because this is happening and it’s something that we need to talk about.”