“I think what’s beneficial is the gathering of the village”

The fourth edition of Queer Performance Camp wrapped up two weeks of workshops, residencies, and performances with a pyjama party—a fitting crescendo for a festival that exists as much to carve out space for queer connection as it does to support the work of the community’s diverse artists.

Many of the participants of the festival, which ran between Feb. 1 and 16, say these kinds of spaces remain indispensable, even as society is evolving to become somewhat more inclusive.

“In general, the queer community is so varied and diverse, and it’s difficult for us to meet up and to collaborate together,” said Niuboy, whose movement-based performance piece, The Dome, transports its audience to Planet X, a place to find respite from the burdens of life on Earth.

“This opportunity for us to see each other’s work, to meet each other—it’s huge,” they said. “We need it as queer people.”

Niuboy was one of four artists to present their unfinished work at Tangente, a dance space, as part of a two-week residency called This Is Actively Built. The residency’s first week took place in Calgary, while its second was embedded into Queer Performance Camp.

Niuboy, who hails from Edmonton, cited the relationships they have forged with the residency’s other artists as one of the most rewarding aspects of the experience, a feeling shared by their peers.

“I now have a queer family in some ways,” said Kevin Jesuino, one of the other artists who was included in the residency. Jesuino said these connections are a benefit to his health and self-esteem.

“I think what’s beneficial is the gathering of the village,” he said, “so we can then exchange ideas, engage with each other, and build relationships.”

In contrast to his hometown of Calgary, where he said opportunities for queer artists can sometimes be mired in tokenism, Jesuino appreciated how the festival provides room for queer expression that is not limited to creating art about queerness.

“It’s not just about making queer content,” he said. “It’s about creating space for queer people to make art.”

Niuboy used their spare time to take in as much as possible at the festival. “I think the work in Montreal is really boundary-pushing, and the work that Queer Performance Camp is bringing in is really varied,” they said. “It’s been challenging to watch, which is really lovely.”

“I think art is tremendously powerful depending on how it’s used,” said Michael Toppings, general director of Montréal, arts interculturels, one of three organizations behind Queer Performance Camp alongside Studio 303 and La Chapelle.

Toppings believes Queer Performance Camp offers an alternative to Pride, which he said many in the community believe has been deflated, losing its political edge in favour of commercialization.

“I’d love to say that there isn’t any need to make anything associated with queerness political, but I don’t think we’re even close to that,” he said.

“I can’t speak for why or how [Queer Performance Camp] is used by the participants, but I think by the mere existence, it’s a political form,” he said. “However anyone wants to use it, it’s up to them.”

For Jesuino, embracing this philosophy, which he describes as queering the process, also speaks to decolonization, gender equality, and ableism. “It starts to open doors to—it’s not just white gay men. It’s people in wheelchairs. It’s about People of Colour,” he said.

The workshops, open to the public, were no exception to the guiding principle of creating space. 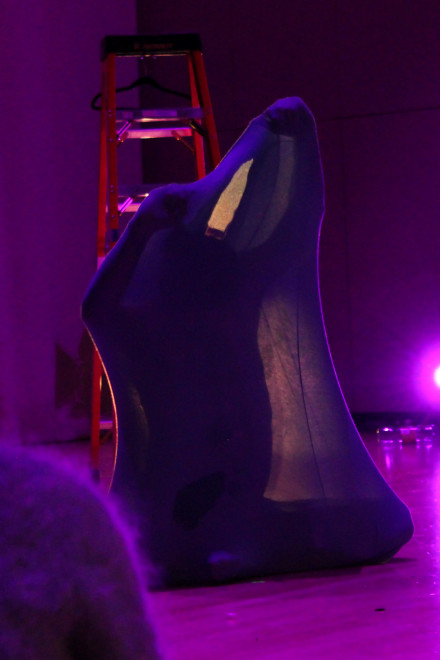 Kevin Jesuino performs his solo piece ‘The End’ at the dance space Tangente on Feb. 8 as part of the residency This Is Actively Built. Photo Marcus Bankuti

“I think that we can, with these kinds of spaces of sharing, find the strength to reaffirm our voice and to shape constantly that quest that we are going through,” said Ariah Lester, who performed at the MAI and led a workshop called The Space of the Heart, which used movement to support discussions about art and life.

Filipe Correira, who attended the workshop, described the significance of sharing personal experiences there.

“There was a lot of sadness in most of the stories, but it’s so nice how some people were able to tell it in a funny way, in a more happy way.”

He said it inspired him to see painful feelings transfigured like this, noting that finding humour in sadness is not something that comes naturally to him.

“Being queer is really related to your emotions,” he said. “I come from a place where it’s really a minority and oppression still happens. For me, [this space] is precious,” he said.

He was so moved by his experience that he is already planning to volunteer with Studio 303 during Nuit Blanche and again at next year’s Queer Performance Camp.

Toppings recalled an event that marked his organization’s first involvement with the festival. It was called This Is How Queers Pray.

Given the theme, he had girded himself for an atmosphere of darkness and anger, but he was uplifted by discovering the opposite.

“All I can say for that is my expectations were blown out of the water, and to never assume any one thing from the queer communities, because it’s very likely that the end result is going to be very different from what you expected,” he said.

For Correira, art offers the opportunity to engage a healing process. “Sometimes it’s not right in the moment it’s happening; it’s a continuous process. It still resonates after,” he said.

Toppings said he would not be doing what he does in life if not for his belief in the power of art to make an impact.

Jesuino, whose theatrical movement-based solo piece is called The End, said the experience provided space for personal reflection as he closes what he described as a 10-year chapter of his life.

“How do we end something?” he asked.

“How do you know when something is done?”