Queer Hoops Is Making the Sport Accessible and Fun

Every Monday, the gym resonates with the same sounds: laughter, cheers, the blare of speakers, and the unmistakable echoes of basketballs against hardwood.

It’s all smiles and shouts of encouragement on the floor throughout the evening.

Looking at this scene, knowing it happens weekly, it’s easy to tell that this is a picture-perfect version of what Lila Platt had in mind when they hatched the idea for Queer Hoops.

“No matter how it goes one week or another, people are always psyched about it,” said Platt. “That makes me happy. I love doing stuff that makes other people happy.”

In Jan. 2019, they started Queer Hoops, bringing to fruition an idea that had been with them for some time: a truly inclusive, safe, queer space for basketball.

A former CEGEP basketball player, Platt played through the competitive ranks, encountering the homophobia and queerphobia that so often rear their heads in athletics.

From high school gym classes to high-level competitive games, slurs and hateful attitudes are thrown around without a care.

Environments like these can push so many away from the game they love and stop others from ever encountering sports in a meaningful way.

Toxic environments like these are part of the reason Platt didn’t go on to play university-level basketball.

With years of the sport behind them, they had a front-row seat to the problems in the game they called their “first love.”

But their long involvement in the game also means knowing everything that makes the sport so great. With some help and a push from a friend, they began building something that would stand as a fun and welcoming basketball environment.

Now, every week at 8:15 p.m, between 10 and 25 people warm up, introduce themselves, share their pronouns, and play a collection of basketball games without judgment, worry of injury or toxicity, or self-consciousness about their skill level.

It’s meant to be affordable and open to anyone, with a cost of $5 to drop in and play.

There’s a crowd of regulars, but also newcomers each week. At first, that was a bit of a surprise to Platt, who worried that no one would show up when things started.
“My partner’s motto for [Queer Hoops] was ‘If you build it they will come,’” they said.

And they have, every week. Unfortunately, organizations like this aren’t always the most common or easy to find.

“I’ve definitely heard that from almost everyone who comes, that they wanted something like this,” said Platt. “Maybe they come from spaces that are more toxic, and maybe this has become a safe space for them to just try it.”

“My partner’s motto for [Queer Hoops] was ‘If you build it they will come.’” — Lila Platt

People keep coming back after finding they are welcome in the space.

Often, when people are actually allowed to have fun with the sport in an environment that doesn’t push them away, they end up enjoying it more than they thought they would.

The level of support everyone feels from each other is one of the key components of the experience.

During games, players are focused on uplifting and congratulating each other more than competing—there is no official scorekeeping.

“It’s been one of the most positive aspects of life in the last year. It’s been a support system […] just having this regular community of other queer folks who are into sports,” said Liz Rogers, a participant who also takes over some of the organizational duties when Platt isn’t available and even designed the Queer Hoops logo.

“I’m getting exercise and building endorphins and making more friends. It’s been such a good support in that way, mental health and spirit wise,” she said.

The anti-competitive aspect of Queer Hoops makes for a greater sense of team spirit for everyone participating—it helps build community.

Rogers spent much of her life in sports, but in recent years she had grown away from it. For example, she tried an adult dodgeball league, which she quickly discovered to be very intense and overly competitive.

Her Queer Hoops experience has been about getting back to what she loved about sports her entire life.

“It kind of feels like rediscovering a part of myself. I always loved playing on a team and the competition and camaraderie,” said Rogers. “I think I forgot how much I love it.”

While you have long-time athletes like Rogers and high-level players like Platt, Queer Hoops welcomes players with a wide range of experience and skill.

For Platt, the weekly sessions are also a chance for players to learn and improve while having fun. No one gets turned away because they aren’t good enough.

“There’s a lot of pressure of ‘If you don’t start a sport or an instrument when you’re four, then you can’t really do it later on.’ But I think that’s bullshit,” said Platt, stressing that people should be able to pick up and enjoy new things at any age. 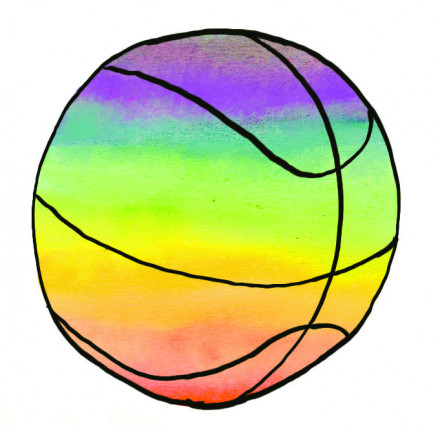 “Build it and they will come.” Queer Hoops has become a regular refuge from the toxicity and heteronormativity of the sporting world.

The room to learn and even the friendly push that people are willing to give at Queer Hoops has helped Éliane Thivierge fully embrace the experience.

Without much confidence in their ability to play well or score when they first joined, they tried to tell other players that they would just play defence or stay back more and not shoot much because they weren’t good.

“Someone would always cut me off [and say], ‘No you’re here to play, you’re gonna play. Stop saying you’re bad,’” said Thivierge.

Other people made sure to explain the rules to Thivierge and give pointers where they could in a supportive way.

Instead of keeping the ball away from them, teammates made sure to pass them the ball often, helping to build their confidence.

“I was teased in school. If you weren’t good in the sport, people wouldn’t pass you the ball. It’s the opposite in Queer Hoops,” Thivierge said. “People will pass you the ball so you have the opportunity to get better. That took me by surprise. They didn’t let me put myself down.”

Thivierge doesn’t feel any anxiety about their performance anymore. In fact, with the experience they’ve gained, they’re even helping new participants out with some of their own learning when it comes to basketball.
Platt has noticed—and takes pride in—the constant improvement of the people that come back week after week to play.

They’re enjoying themselves, and suddenly their cardio has gotten significantly better. They’re also trying out new moves, passing better, or even just feeling confident enough to shoot or help others along.

Looking at Queer Hoops shortly after its first anniversary, Platt can see so much of the things they set out to create in order to let people enjoy and experience their “first love.”

As much as the project they created has become a community for others to enjoy, it’s something bringing a smile to their face weekly. It grew into their community.
“We’ve become a little family,” said Platt.

“I’m someone who’s very hard on myself. Every time I’m like, ‘No one’s coming this time, this is the time that no one shows up,’ and that never happens. But when I step back and look at it, [I realize] people love it.”