After a tough loss at the hands of the UBC Thunderbirds on Friday, the Concordia Stingers were back in action on Sunday afternoon for their bronze medal matchup against the Queen’s Gaels.

Friday’s loss left its mark on the Stingers, as they took a while to get anything going offensively against Queen’s. The visitors were the early aggressors, building a commanding 14-0 lead.

Concordia was able to get a try on the board before the end of the half, but a missed conversion kept the home side at a two-possession disadvantage.

“It took us a little while to get started,” said head coach Craig Beemer. “It’s kind of the nature of the beast with this tournament with three games in five days.”

The Gaels applied heavy pressure to the Stingers as soon they got their hands on the ball. Concordia’s defence was able to fend off and slow down the Gaels’ attackers in the first minutes of the game. But Queen’s was eventually able to open the score on a Liam Casey try following a gruelling goal line battle.

After watching Queen’s extend its lead to 14-0, Concordia’s offence finally offered some action to the fans who gathered at Concordia Stadium. Stan Blazkowski’s try at the twenty-fourth minute of the first half was the only bright spot for the Stingers offence in the first half.

“Stan is a pretty fantastic human being and he loves rugby,” said Beemer. “He’s the kind of guy you want on your team and he’s got some great skills for a first-year player. I’m happy to count on him for the next few years.”

The Stingers started the second half with an improved rhythm on offence. But their tempo was swiftly cut off by a Dylan Young score, which widened Queen’s lead.

Young, who was named player of the game for the Gaels, added his third try 11 minutes later bringing the score to 24-5. Hopes were slim for the home side, but the try served as a wake up call.

The energy they’d been lacking all game long on offence was finally showing for the Stingers. Their passes were smarter, their cuts sharper and their vision improved as they stretched out their offence making the most out of the width of the field.

Rookie Luca Milne was the first to strike for the Stingers in the second half to bring his team within two possessions of a tie. 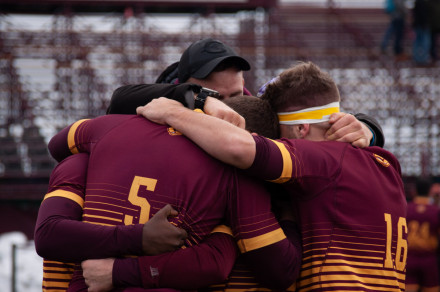 Concordia will look to make it back to Nationals next year, improving on their impressive run this season.

The late shootout continued with Queen’s adding another try to distance themselves from the surging Stingers. However, the home side was not going to let this one end without putting up a fight.

Michael Laplaine-Pereira took over the game following Queen’s score. The fourth-year player first crossed the goal line to bring the score to 31-17, following a quick conversion from Stan Blazkowski.

“It gets really tough when you’re tired.” said the veteran. “I told myself that we had to get back into this one. We took a deep breath, we gathered ourselves and we gave all that we could until the final whistle.”

He led the charge for the Stingers on the next action, reaching out for another late try. But any glimpse of hope for the Stingers faithful was crushed moments later when Blazkowski’s quick kick missed the uprights, putting the game out of reach for the home side.

Concordia was right back at it on the ensuing replay, running on the adrenaline of the last two tries. The Stingers made quick work to reach Queen’s zone.

A superb passing play led Stingers’ Jean-Christophe Vinette to the end zone for what seemed like a third straight try. But, a yellow card to Concordia’s Zach Pelletier forced the action to be called back while giving the ball to Queen’s.

The visitors made the smart play kicking the ball into the stands to end the game and confirm their victory over the Stingers.

“Hats off to Queen’s,” said Beemer. “They played really well. Our defence puts teams under a lot of pressure and they responded to that very well. They were the better team today.”

Concordia bows out of the Canadian University Men’s Rugby Championship in the bronze medal game for the second year in a row, falling just short of Beemer and the coaching staff’s expectations.

“This [loss] hurts a lot more,” he said. “We’re pretty tenacious. There’s no give up in any of our players. That’s what I’m most happy about.”

Laplaine-Pereira’s late-game surge was recognized, as he was awarded the player of the game award for the Stingers.

As for the future of the program, Beemer remains confident. He pointed out the fact that they had five rookies play important roles in the game.

The head coach is aware that his graduating class will leave some big shoes to fill, but he trusts his young players to step up and help them return to their winning ways next season.