Staring off the week is the Anti-Colonial Fall Feast. The community dinner and fundraiser will benefit the Native Friendship Centre as well as the Kanesatake Longhouse, said Wade Walker, in charge of finance and organizational planning at QPIRG.

“We try and make it a very festive, fun event. Very family friendly. Everybody comes and eats a bunch of food,” they said.

“Biidaaban,” a short stop-motion film, will be screened during the Feast. The film was produced, directed, and written by Amanda Strong. Strong is a Michif Indigenous filmmaker from British Columbia, but grew up in Ontario. 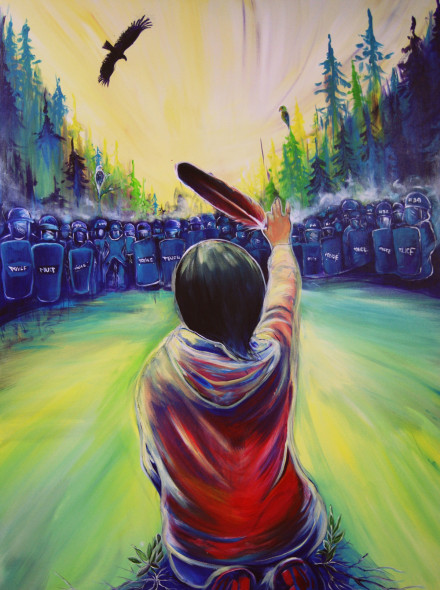 The stop-motion film is about a young two-spirit person reclaiming the traditions of maple syrup harvesting in an Ontario suburb.

On Dec. 2 from 6 to 8 p.m., QPIRG will be hosting an intro to Indigenous Solidarity at Le Frigo Vert.

“We wanted to host a workshop that was really capitalizing on people’s interest, or at least awareness of issues affecting indigenous people, but don’t really know what to do or don’t know how to act on it,” Walker explained. “What’s actually useful to do? What’s helpful?”

QPIRG will bring in a facilitator to deliver the workshop. They’re hoping this workshop will help “guide people’s developing allyship […] in a more productive way.”

They explained it can be hard for newer allies to know where to start, and they’re hoping this workshop will provide a good foundation for newcomers.

To close the week, QPIRG has organized a panel of people who are active within the Indigenous community.

“The consequences of colonialism are still very real today. A lot of people think it’s just things from the past, but it’s still very much ongoing.” —Wade Walker

The panel, called If it’s about the Land, it’s about Us: A Climate Justice Panel focuses on the role Indigenous people have continued to play within the climate crisis.

“There’s also currently a lot of energy in this city around climate justice activism,” said Walker. “We really wanted to bring back the focus to the Indigenous folks doing most of the frontline work. They’ve been the people, the ancestors, who knew how to keep these lands, protected them. Often they’re the people most affected by pipelines, and things like that.”

QPIRG chose to invite Indigenous land defenders on the panel so they could speak about their work for themselves, as opposed to someone else telling their story.

“We’ve got people who have been involved in land defense efforts right across the country, which is pretty exciting,” they said.

“Because we’re based at a university that’s broadly very white, and almost entirely settlers on Indigenous territories, […] we feel like we need to not just acknowledge the lands that we’re on, but actually try and support the people that are trying to protect them, and have protected them throughout history.”

They hope that the Anti-Colonial week will open the eyes of Concordia’s students to what’s happening outside of the Montreal bubble, and create a link between students and the Indigenous community.

“The consequences of colonialism are still very real today. A lot of people think it’s just things from the past, but it’s still very much ongoing.”